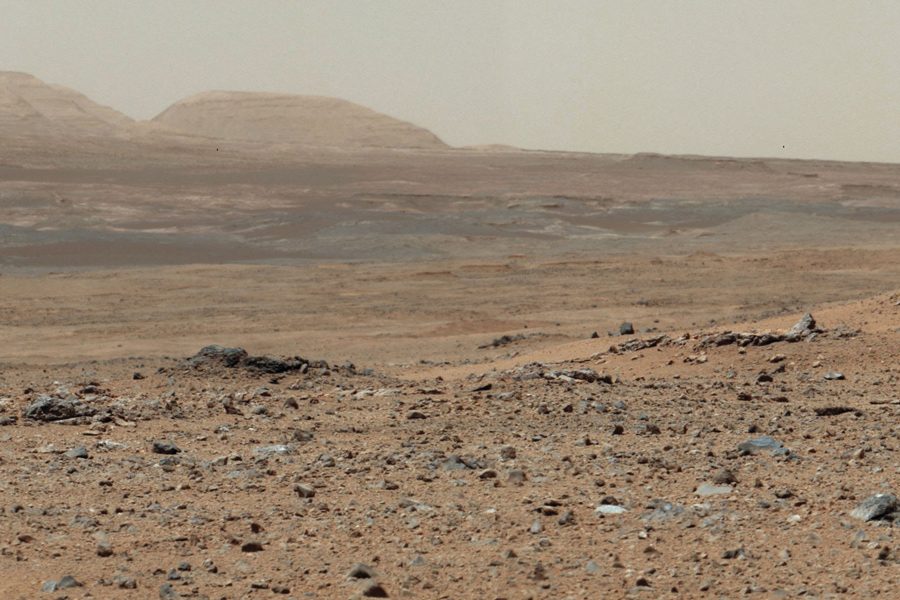 A view of the Martian surface as captured by NASA’s Curiosity rover on July 24, 2013. A team of researchers at Northwestern are working to build a predictive model of group behavior to help NASA assemble a team for a three-year mission to Mars

Cooperation is key in space, and Northwestern professors are helping NASA identify important traits for successful teamwork in anticipation of an upcoming Mars expedition.

To help NASA assemble a team for a three-year mission to Mars, Communication Prof. Leslie DeChurch and McCormick Prof. Noshir Contractor are working with a global team of researchers to develop a predictive model of group performance, which anticipates conflicts and communication breakdowns among astronauts based on their personality traits.

The research found that people with a good sense of humor tend to do better in the simulation, while overly self-focused and narcissistic crew members can lead to group dysfunction, DeChurch said. The analysis of different prototypes of teamwork will improve NASA’s selection program for future missions, she said.

“When you are on a long-distance space mission, not only can you not get away from problems, but you are relying on everybody in your team to help you mitigate some of the challenges that you are facing personally,” she said.

To create the model, Contractor, who is also a Kellogg and Communication professor, said the team analyzed transcripts of conversations during a space mission in 1973 — the Skylab mission — during which crew members turned off communication with ground control in protest of a demanding schedule. Noshir said the team applied textual analysis to the transcripts from Skylab to try to understand the cause of the strike.

Michael Schultz, an NU postdoctoral researcher involved in the study, said the team found that the crew members in Skylab were deliberately hiding information from mission control. Schultz said he concluded that, to succeed, astronauts need more unscheduled communication with each other and with ground control.

“Whether it was a medical update or some kind of mission operation, every (interaction) was scheduled down to the minute,” Schultz said, speaking about Skylab. “What the research suggested is that (astronauts) need more venues for unscheduled discussions, because that’s where the astronauts can bring up problems they’ve encountered.”

After the experiment, DeChurch said the team observed that space crew dysfunction usually appears during the third quarter of an analog mission, a time when subgroups emerge and people struggle to get along. In one case, DeChurch said, a male analog participant developed an affection toward a female, which made her uncomfortable and caused animosity among the group.

“No one metaphorically or physically killed one another in the simulation,” Contractor said. “But they have very strong feelings, almost like a reality television show.”

By asking analog astronauts questions about their interpersonal relationships, Contractor said the team was able to build computational models that can predict potential conflicts among crew members.

Contractor said the team is also expanding the experiment to the SIRUS analog in Moscow, in which two Americans and four Russians will undertake a 120-day fictional mission.

While DeChurch said the team has already been able to draw some conclusions, it’s still in the process of conducting more tests.

“Everyone in the world wants to get together to see what we can do,” said Contractor. “The idea that we might become an interplanetary species is just so fascinating.”