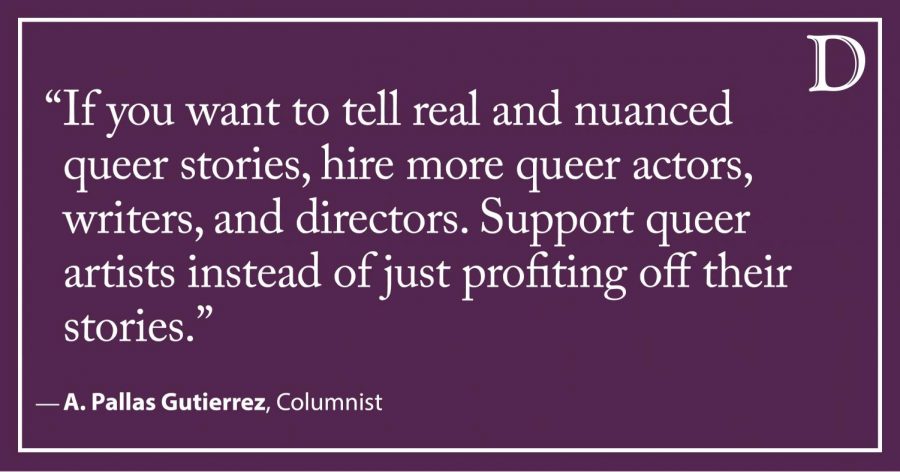 This is the sixth column in “50 Years of Queer Anger,” a series examining LGBTQ+ issues in the United States since 1969.

Colman portrayed the frail Queen Anne, caught in a lesbian love triangle with Lady Sarah Churchill (Rachel Weisz), who is governing England in Anne’s place, and Abigail Masham (Emma Stone), a newly-arrived servant. Ali played real-life pianist Don Shirley, a queer black man, who hired Tony Lip, portrayed by Viggo Mortensen, to drive him around the American South in 1962. Malek portrayed rock legend Freddie Mercury, the bisexual lead singer of Queen, as the band rocketed to stardom. Undoubtedly, these films provided more mainstream queer visibility, but they are not without their flaws.

The official trailer for “The Favourite” depicts the film as a piece centering on political intrigue in Queen Anne’s court, making queerness seem like a throw-away detail, while the actual movie ended up focusing far more on the relationship between the three women.

“Green Book” has been heavily criticized for its handling of race relations in the Jim Crow South. A movie that could easily have shown how difficult it was to be a black artist in 1962 instead focuses on the relationship between Shirley and Lip. The fact that Ali’s Shirley was nominated as a supporting character while Mortensen’s Lip was considered the lead shows how poorly Hollywood still handles issues of race. “Green Book” has been compared to “The Help” and “Driving Miss Daisy” as a racial reconciliation fantasy that does not thoroughly address America’s racist past. The film has also drawn criticism, notably from Shirley’s family, for inaccurately depicting Shirley’s life. Ali and others were not made aware throughout the process that there were living family members to talk to (Ali has apologized to the Shirley family for any inaccuracies and damage). Perhaps most importantly, given the movie’s tagline, “Inspired by a True Friendship,” Shirley’s family has stated that the relationship between Shirley and Lip was purely professional.

Other than Queen’s completely fabricated split before Live Aid, the biggest inaccuracy in “Bohemian Rhapsody” is the depiction of Freddie Mercury’s sexuality. The most intimate on-screen moments are between Mercury and Mary Austin (Lucy Boynton), while his extensive relationships with men are often left off-screen. His queerness is presented almost as a weakness, rather than being used to critique the queerphobic society that he lived in (and that we still live in today). Malek frustratingly referred to Mercury as a gay man in his acceptance speech, when Mercury was bisexual. Mercury’s sexuality needs to be honored, and the difference is significant, especially due to rampant bi erasure.

But the hardest thing for me to grapple with about Colman, Ali and Malek winning is the irony of awarding straight actors for playing queer roles, while queer actors have difficulty finding work at all.

This is not a new trend by a long shot, but now, when Hollywood is producing more and more films with queer characters and plot lines, it is imperative that we consider whose stories are being told and who gets to tell them. Timothée Chalamet and Nick Robinson were rocketed to stardom for their roles in “Call Me By Your Name” and “Love, Simon”, while openly queer actors still struggle to get cast.

Actress Evan Rachel Wood, who came out as bisexual in 2011, said, “A lot of people advise you not to do it. … They don’t want you to be less desirable to men.” While playing gay can bolster a career or a film, as it did for Chalamet, Robinson and many others, there is still an industry-wide fear that actual queerness will hurt ticket sales. Another reason actors do not come out is the fear of being pigeon-holed. Although plenty of straight actors play queer characters, it’s much more rare to see openly queer actors play straight.

While having straight actors portray queer characters is creative license at best and queerphobic at worst, Hollywood’s tendency to hire cis actors to portray trans characters is flat-out transphobic. Although the phenomenon was not onstage at the Oscars this year, awards season has seen it in years past. Eddie Redmayne was nominated for Best Actor for his role in “The Danish Girl,” which portrays the story of Lili Elbe, one of the earliest recipients of sex reassignment surgery. Although he did not win the Oscar, having a cis man play a trans woman presents transness as a costume, rather than an identity. Actors like Redmayne portraying trans characters sends the message that, at the end of the day, any trans person is “really” whatever gender they were assigned at birth, which is an inherently transphobic and harmful message to be sending. While films depicting trans people may be well-intentioned, casting cis people is doing more harm than good.

Hollywood, put your money where your mouth is. If you want to tell real and nuanced queer stories, hire more queer actors, writers, and directors. Support queer artists instead of just profiting off their stories.

A. Pallas Gutierrez is a Communication first-year. They can be contacted at [email protected] If you would like to respond publicly to this op-ed, send a Letter to the Editor to [email protected] The views expressed in this piece do not necessarily reflect the views of all staff members of The Daily Northwestern.