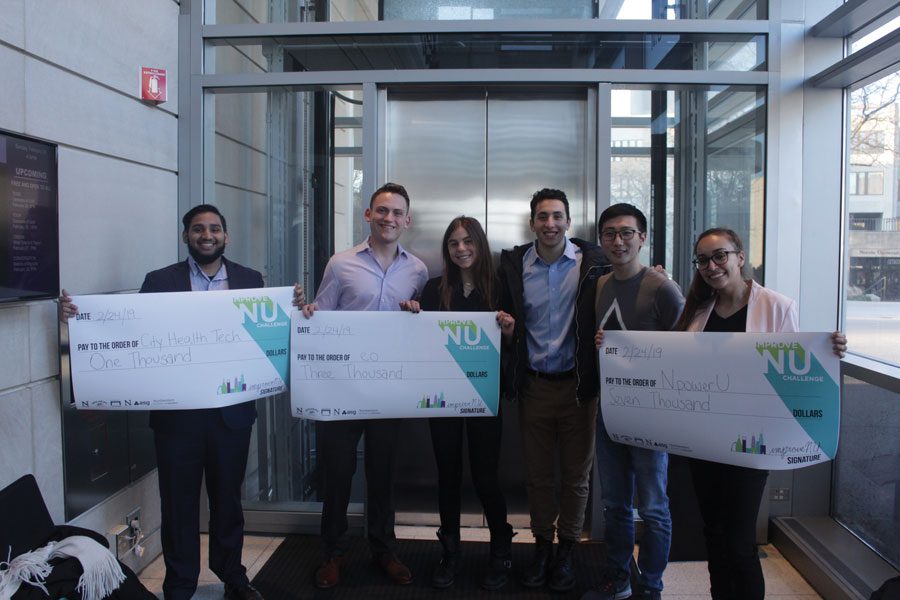 Improve NU winners stand with their checks at The Block Museum of Art. McCormick sophomore Lilian de Souza won the competition with her idea, NPowerU.

Spectators gathered on Sunday in Kresge Hall and the Block Museum of Art to witness the second annual Improve NU Challenge’s semifinal and final rounds.

Sunday’s competition included a semifinal and final round where each student group presented their idea to a panel of judges that consisted of administrators who were experts in each category. The five categories were divided into Wellness, Academics, Campus Life, Diversity & Inclusion/Affordability and General (Other).

De Souza, a transfer student from the University of Miami, said she first came up with her idea after learning about of the “five back-to-back incidents” of attempted grabbings on campus that occurred during Fall Quarter. Her mom gave her an alarm in the fall similar to the one that de Souza wants to distribute, she added. She also researched the best personal alarms and looked into on-campus safety programs, like a free self-defense class given by University Police, that she hadn’t been aware of.

Throughout the process, de Souza said she most appreciated the receptive attitude of the judges.

“Not only are they trying to choose a winner, but all eight of them were saying, ‘Oh thank you for sharing’ or ‘Oh I didn’t know that. It was really nice for you to tell us that,’” de Souza said. “They liked us sharing the ideas because they get little snippets of ‘We should change that,’ and that’s what I didn’t know about the competition except for when I was watching it.”

During the presentations in the final round, judges could interject and ask logistical questions. While de Souza spoke, a judge asked, “Why hasn’t this been done yet?” referring to NPowerU.

Communication junior Tyler Ennis competed in the challenge and pitched his idea, Better Box. Ennis said he planned to provide local Evanston businesses with reusable food containers to replace disposable containers, which would be delivered to students when they order from an app like Postmates. Ennis added that the chance to compete was worth it.

“That’s what I really like about Improve NU — it is an opportunity for me as a low-income student to test my idea in front of the people who really need to support me instead of otherwise paying upfront to test out my idea, because not everyone can create the next Amazon in their dorm room,” Ennis said. “Honestly, without a catalyzer like Improve NU, without the risk of embarrassing yourself and also without the award of starting something, I would not have done that.”