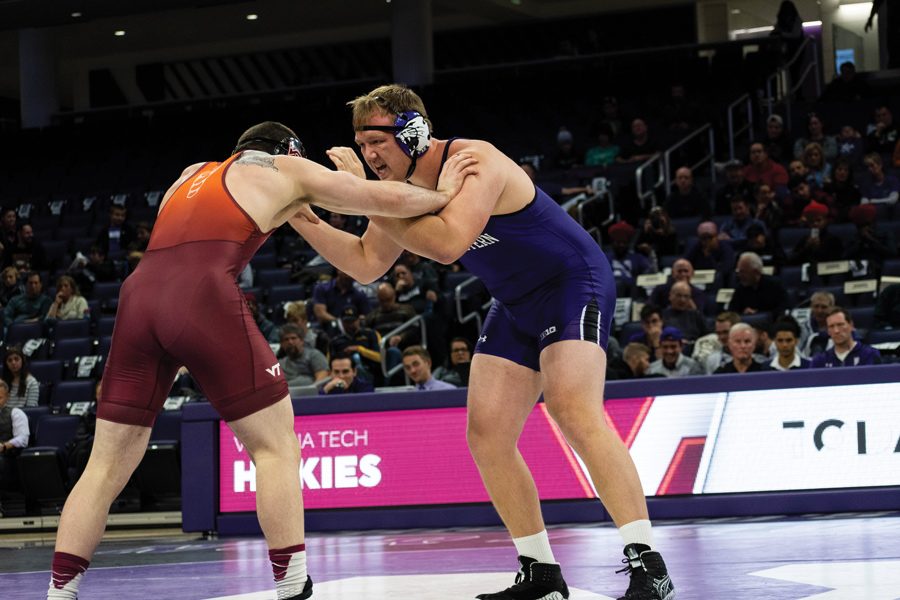 Conan Jennings works on the mat. The senior won the final regular season match of his career Saturday.

In the last regular season matchup ever for Northwestern’s Conan Jennings, the senior dominated Southern Illinois Edwardsville’s Jake McKiernan to the tune of an 11-0 major decision, one of seven Cats to earn bonus point wins against the Cougars.

And the Wildcats (5-10, 2-7 Big Ten) reeled off eight straight wins on their way to a 36-7 domination over SIUE (6-14, 4-3 Ohio Valley) as Jennings, juniors Zack Chakonis and Alec McKenna, and sophomore Colin Valdiviez all recorded shutouts against their respective opponents.

Chakonis’ win was particularly impressive. He recorded his second straight win by fall, having defeated Illinois’ Andre Lee in similar fashion last week at Welsh-Ryan Arena. Chakonis took a 7-0 lead on opponent Christian Dulaney just three minutes into his match before pinning his opponent to the mat to become the first NU wrestler to win at the new Ryan Fieldhouse.

The streak of success continued as sophomore Sebastian Rivera ended the season like he started it, continuing his stretch of undefeated play at the 125-pound weight class. His technical fall over SIUE’s Gage Datlovsky was his 16th win by bonus points on the season and put the Cats up 15-0 early.

Sophomore Ryan Deakin finished his season by beating SIUE’s Justin Ruffin in an 11-3 major decision, improving his record to 24-2. After leading 8-3 at the end of the second period, Deakin finished Ruffin off with 3 straight third period points, all but putting the dual out of reach for the Cougars, who struggled to find an answer to NU’s high-octane offense all night.