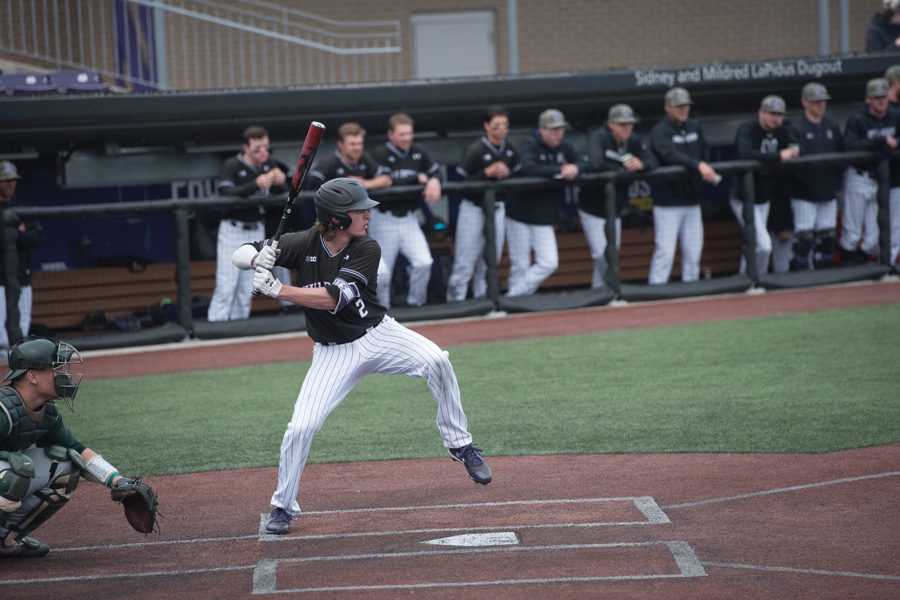 Jack Dunn digs in the batter’s box. He hit leadoff for the Wildcats this weekend.

In a series that began a day later than scheduled due to rain, Northwestern experienced a heartbreaking walk-off loss in game one, a debilitating blowout in game two and a resounding win in game three.

The Wildcats’ (3-4) resiliency was on display in the third game on Sunday, as the program picked up its first ever-win over Duke (6-1) holding on for a 5-3 victory. This was on the heels of being swept in a doubleheader Saturday losing 5-4 in 10 innings in game one, and then losing 23-8 in a game that carried over into the early hours of Sunday morning.

Coach Spencer Allen said after the tough day on Saturday, he addressed his players individually.

“We had some guys really swinging the bat well, really pitching well, and then we had some guys on the complete opposite spectrum,” he said. “If you play baseball long enough, you’re going to go on the downside of a tough outing or tough three or four plate appearances. I just said ‘Come together, pick each other up, really make sure we stay together,’ and they just did a good job.”

Junior pitcher Hank Christie, who threw six innings of one-run ball in game one with a career-high ten strikeouts, noted the importance of making sure his teammates stayed confident.

Christie was one of several bright spots this weekend for the Cats tossing in his second straight strong performance to start off the season. He threw six innings, allowing only one run against Brigham Young last week, and said he played a role in keeping the team confident.

“We definitely pulled guys aside, just made sure they don’t lose faith,” he said. “It’s week two, so for (some) guys that was their first real opportunity or second real opportunity.”

In the batters’ box, NU was aided by redshirt freshman David Dunn, who had multiple hits in all three games against Duke, adding to a total of five in six games started this season. He also scored the go-ahead run in the Cats’ three-run eighth inning on Sunday after a pinch-hit triple from junior outfielder Leo Kaplan.

“(I) just felt comfortable knowing what pitch that I’m looking for and being able to attack the fastballs,” Dunn said. “That’s been our game plan all week long, so just going out there with that mindset and getting on base however I can and score some runs.”

On Sunday the Cats left Durham Bulls Athletic Park feeling more confident as a team. Despite their losses on the Blue Devils’ practice field on Saturday, Christie said the team isn’t disappointed with the result of the series.

“We’re a better team in my opinion,” Christie said. “Saturday was a mess, but in the first and third games we kind of crushed them statistically, so it’s bittersweet, but very happy to get out of here with a win.”