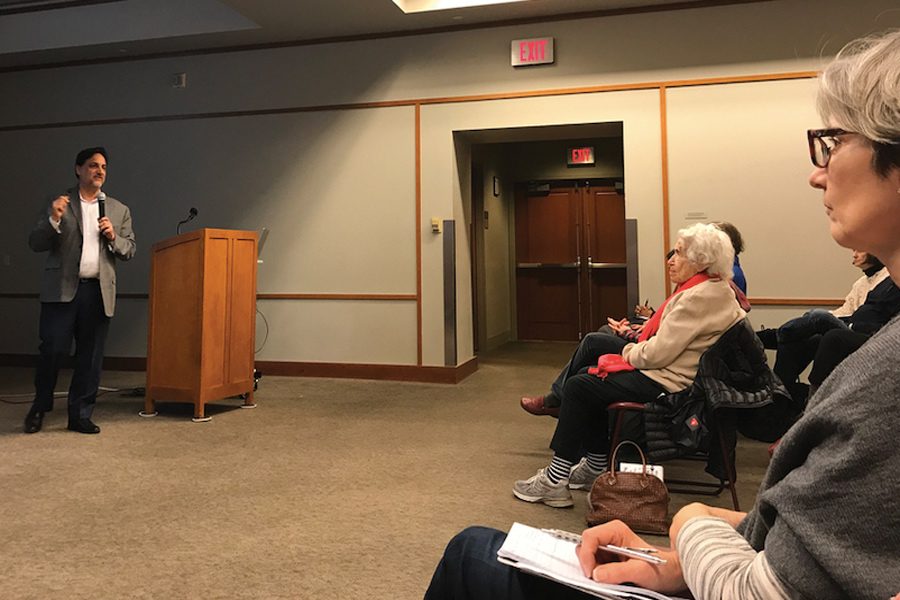 David Waskow gives a talk on climate change at Evanston Public Library. Waskow said concrete facts, along with youth movements, are key to the fight against climate change.

Right now is the “best of times and worst of times” to fight climate change, said David Waskow, the director of the International Climate Initiative at the World Resources Institute.

Waskow discussed economic policy as an approach to fight climate change at the Evanston Public Library Friday afternoon. North Shore Village, a nonprofit for local senior activists, sponsored the event. Despite a growing environmental risk urging a need for immediate action, Waskow said initiatives like the Paris Climate Agreement point to a global consensus for change and offered hope.

He said sit-ins and growing pressure from youth groups alone cannot galvanize change. Multiple industries like energy, transportation and food and agriculture have been affected, Waskow said, and concrete statistics on the negative environmental effects can further motivate the call for change.

“With so many dimensions involved… you have to tackle different emotions in dealing with (climate change),” Waskow said. “It’s the greatest global challenge of this century.”

Waskow said a change in carbon consumption would create a major shift in the job market. He questioned how to encourage residents to engage in the economic shift and how to ensure people are equipped with skills for new jobs in sustainable energy.

He said India modeled a quick shift toward sustainability. Since 2016, India has doubled the use of solar energy every year, a feat Waskow called a “remarkable story.” He said the lack of energy access known as “energy poverty” drove such a dramatic change.

Implementing a carbon tax, an economic policy widely debated by environmental justice advocates, goes directly to the source of the issue: generating revenue, Waskow said. But the legislation may not be effective in dramatically reducing carbon emissions, he said. Waskow said the World Research Institute is currently analyzing the potential effects of a carbon tax.

“You have to think about how you do things like carbon taxation and climate policy in general, with an eye to how it’s going to affect people directly,” Waskow said. “It’s true, not only on the consumer side. It’s true in terms of workers and fossil fuel intensive industries.”

Former Evanston resident Laurie Howick said she came to the climate change talk because she is concerned about the planet’s future and is angry at capitalist greed. A California native, Howick has seen the forest fire devastation first-hand, she said. She currently lives on Martha’s Vineyard, Massachusetts, and is also worried about the threat of sea levels rising.

Howick said she has tried to live more eco-consciously in the past few years, shifting to a more plant-based diet and shopping more conservatively. Howick said emphasizing statistics will not drive change most effectively.

“Showing the facts, telling people what’s happening is wonderful,” Howick said. “The gloom and doom needs to be stronger.”

Nancy Bashook sits on the Board of Directors of North Shore Village, the local nonprofit sponsoring the event. She said the presentation combined the global perspective and options for local change effectively.

“I’d like to get down to what we can do personally here… and also think about what’s happening globally,” Bashook said. “I’m sad that it’s going to take us so long to get to where we need to be and wonder if this could really happen to save us all.”