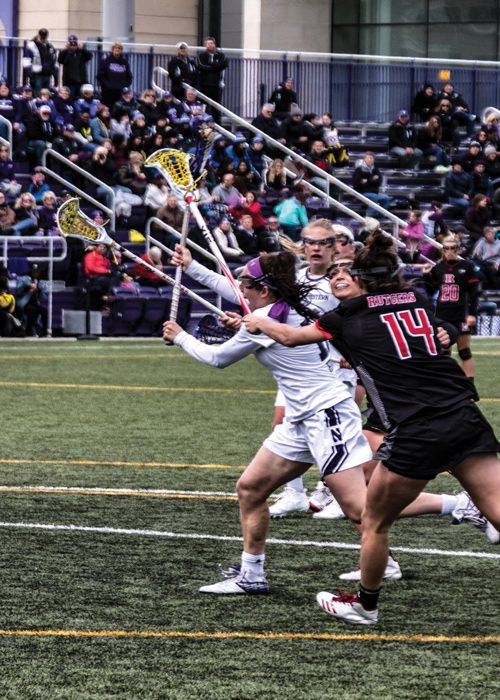 Northwestern players scrum for the ball. The Wildcats have two road matchups this weekend.

On Sunday morning, No. 5 Northwestern will have its biggest test to date. The Wildcats (3-0) are set to face No. 7 Syracuse in a road game that’s bound to be highly competitive.

The Orange (3-1) have been off to a strong start this season, racking up blowout wins against Connecticut, Binghamton and Coastal Carolina. Syracuse’s only loss this season came in a close contest against the country’s top team, Boston College (3-0).

A big part of Syracuse’s success has been its stout defense. The Orange are coming into the game with a top-20 ranked scoring defense, allowing just under eight goals per game, and have caused 53 total turnovers this season, a mark that leads the country.

NU does have some confidence from last season against Syracuse, in a game where the Cats comfortably won 14-10 at home. However, the Cats have since lost graduated attacker Shelby Fredericks and midfielder Sheila Nesselbush, who both dominated the scoring and draw control battles in the last matchup.

“(Syracuse) is a great team,” sophomore goalkeeper Julie Krupnick said. “We remember that from last year, and we see that in film.”

The Cats have scored exactly 21 points in each of their contests this season. NU’s win against Duke last week showed the team can put up goals in a hurry, if needed.

While the Cats have played without senior attacker Selena Lasota for the previous two games, Lasota’s status is unknown heading into the matchup with Syracuse.

“We relied on (Lasota) a lot last year and obviously she’s an amazing player,” Krupnick said. “But other people have really shown that they deserve to be here, and they’ve been playing great.”

A key player for NU’s road trip will be sophomore midfielder Lauren Gilbert. Gilbert has racked up 10 points in the Cats’ previous two games, including key goals down the stretch against the Blue Devils.

Gilbert said the team has been inspired recently to not falter its play in Lasota’s absence.

“Something that we’ve stressed all season is having each other’s backs,” Gilbert said. “Going into the (Duke) game, we wanted to have (Lasota’s) back. That means going out there and giving it our all for each other.”

NU will not have much rest time after playing the Orange this weekend. The Cats are scheduled to play another road game against Canisius (0-2) less than 24 hours later.

Due to its experience from last weekend’s doubleheader, NU knows energy will be an issue in its upcoming back-to-back. However, Krupnick said she is encouraged by the team’s resiliency this season.