Golden: Northwestern has too much talent to play so poorly in Big Ten play 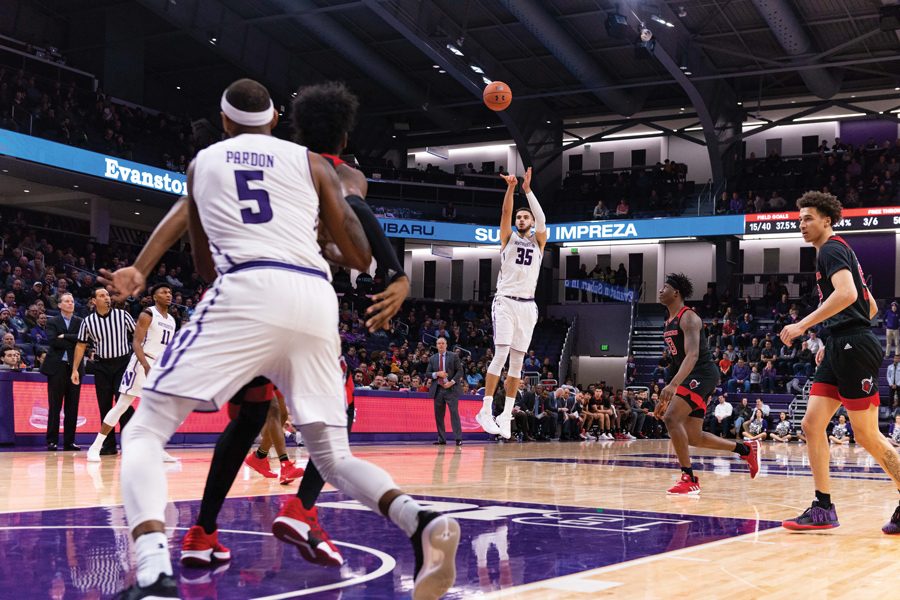 Another game, another underwhelming offensive performance for Northwestern.

In a game pitting two struggling Big Ten teams against each other, the Wildcats were blown out on the road by Ohio State, 63-49. NU (12-14, 3-12 Big Ten) finished shooting 31.6 percent from the field and have now scored under 60 points in six of its last seven games.

NU’s offensive struggles are simply unacceptable, especially when you consider the level of talent that coach Chris Collins has recruited.

When Collins took over the team in 2013-2014, he was presented with a team that had significantly less talent than the current one — and it showed on the offensive end. NU averaged 59.5 points per game for the season, shooting a disappointing 39.6 percent from the field.

From his first year until his fourth, the Wildcats’ offense got better or stayed pretty close to the previous season. NU jumped from 59.5 to 63.5 to 72.0 points per game before settling at 71.1 during the tournament season.

Last year, we saw the disintegration of the offense with Bryant McIntosh injured for stretches of the season. But even with the MacIntosh in and out of the lineup, the Wildcats still averaged 68.8 points per game. This year’s offense, with the loss of McIntosh along with guard Scottie Lindsey, has been unwatchable at times.

Comparing the offensive numbers in conference from Collins’ first year to this year, this year’s team is averaging 59.6 points per game while shooting 38.4 percent from the field. The 2013-2014 team was worse, scoring 54.4 points per game and shooting 37.5 percent.

But there’s a difference between the two teams: Collins and this year’s team have no excuse to play this poorly.

This is arguably the most talented roster that Collins has ever had. While the tournament team two years ago had its fair share of talent, this year’s team had a little bit of everything: seasoned veterans with tournament experience, highly-touted freshmen with potential and a transfer with plenty of scoring ability.

It’s mind-blowing how a team full of scoring ability fails to score more than 60 points on a consistent basis and looks stagnant for long stretches of time. This could be due to the fact that NU doesn’t understand its strengths.

The Cats aren’t a great three-point shooting team, yet they continue to force contested three-pointers after running down the shot clock. For the season, NU has shot 32 percent from three, but continues to take a high volume of shots. In Wednesday’s game, the Wildcats shot 5-for-29 from the three-point line, their second-worst percentage of any game this season. Even with the shots not falling for the Cats, NU took more than 50 percent of their shots from behind the three-point line.

When NU gets the ball to senior center Dererk Pardon in the post, he is an extremely effective option when used properly. But the Cats have struggled to integrate him into games and he has shied away from attacking the rim on countless occasions.

NU’s struggles could also be due to the fact that the Cats don’t have a true starting point guard while they wait for freshman Ryan Greer to develop. Collins has juggled between Gaines, Law and junior forward A.J. Turner, none of whom are true point guards, as primary ball-handlers.

Yes, the Wildcats made the tournament two years ago. But while NU will forever be indebted to Collins, we need to look at this practically. This team has the most talent in Collins’ tenure and they are playing some of the worst offensive basketball in recent memory.

Collins has set a standard at NU — last year’s preseason top-25 ranking said everything about the school’s expectations for the team’s future. Now, towards the end of Collins’ sixth season, it looks like the team is taking a step back.

Any excuse that the Cats previously had is no longer valid. The tournament was two years ago, Allstate Arena was last year, the big-name recruits have been on campus for months and the offense has not improved since November.