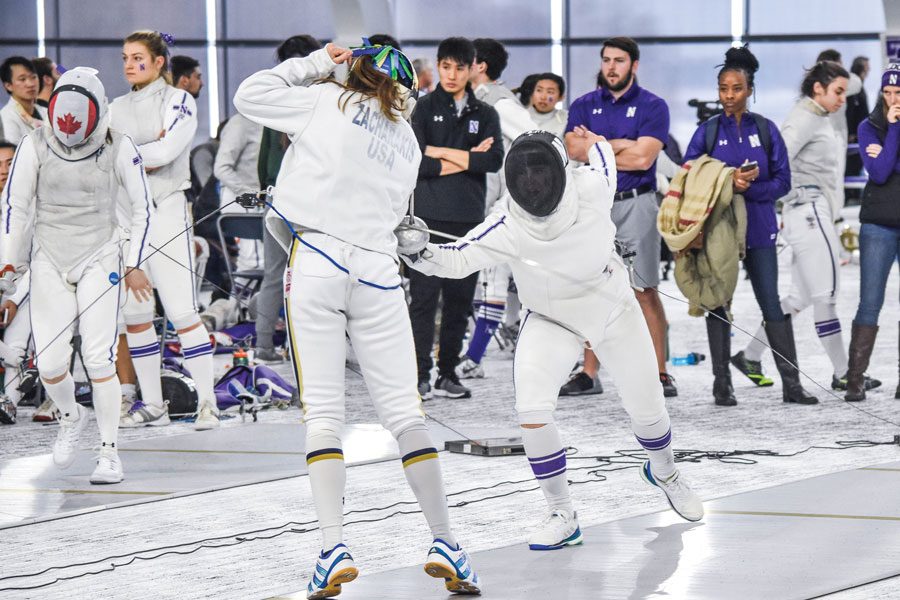 A Northwestern fencer duels an opponent. The Wildcats had a mixed weekend, following up losses to Duke, North Carolina and Temple with wins over Denison and North Carolina.

Last year, Northwestern beat out Ohio State to win the Midwest Fencing Conference team championship. This weekend, the No. 2 Wildcats plan to repeat their success.

NU (39-5) will send 31 fencers to Columbus, Ohio this weekend for the first step of the postseason, the MFC championships. The group will fence individually on Saturday but recombine on Sunday in search of its third title in four years.

The Cats have had one of their best regular seasons ever, finishing with a 39-5 record. They hosted their first home meet in over three years and received a best-ever No. 2 ranking, all with around two-thirds of the team being either freshmen or sophomores.

NU will look to carry on that success at the MFC meet. On Saturday, every fencer at the competition will fight, battling rivals and teammates alike in the individual competition. One champion will be crowned in each weapon style. Sunday, the squads will get back together and fence for the next three titles: team epée, team foil and team sabre. Depending on the squads’ play throughout the day, points are generated and one school will end up on top.

The competition will have representatives from 13 schools, but only two are likely to compete for gold: the Cats and the No. 8 Buckeyes. NU has beaten Ohio State twice this year, 15-12 in November and 14-13 just a few weeks ago at Ryan Fieldhouse. But their most important matchups of the year, this weekend, will be at the Buckeyes’ home venue.

Despite the parity between the two sides, coach Zach Moss said he has high hopes. The format will be different than in the regular season, but he said it’s useful to have the data from the earlier contests for preparation.

The team is similarly excited. Sophomore foil Justine Banbury clinched the conference title against the Buckeyes last year and took third in the individual foil competition. She said that last year, she didn’t really know how big of a deal the MFCs were until she got there. This year, she said, there’s been more anticipation.

“I definitely think we have a rivalry with Ohio State. That’s the most exciting part about conferences, getting a chance to fence them again,” she said. “It’s definitely not going to be easy, but that makes it more exciting.”

The MFC meet could be the last time wearing the purple N for a few of the Cats’ seniors. Moss will only get to send 12 fencers to NCAA Regionals in March, and the team’s four seniors may not all make the cut.

Moss noted that the seniors have gone through a huge amount of change, from the team structure, to his shift to head coach, to the new facilities. He said he hopes the team is able to pull out a victory, partially because it would mean so much for the seniors.

“They’ve been a big part of moving our culture forward and getting us to where we are this season,” Moss said. “Being able to kind of let them finish on a high note, with a conference championship, would be amazing. And I think this team has put in the work to deserve that championship.”