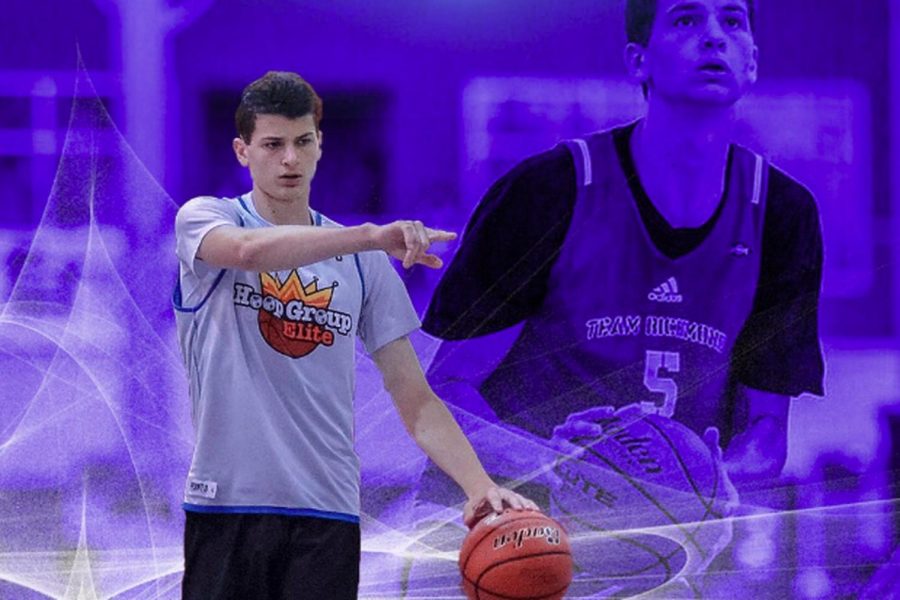 Robbie Beran dribbles the basketball. The incoming freshman is the best recruit NU has ever signed.

On the basketball court, Robbie Beran is smooth. When he’s relaxed, entranced in the flow of the contest and the ball in his hands, the game turns easy. It’s effortless.

Seconds into his high school team’s regular season matchup against Trinity Episcopal, Beran collects the ball from a teammate, cuts back inside the post and nails an easy layup at the basket. Smooth.

“Lot of energy, especially to start the game,” Beran told the Daily. “It was good to kind of get off the ball screen, see one go in.”

Beran, who committed to Northwestern (12-13, 3-11 Big Ten) in October, is the highest recruit in the program’s history, ranked as the nation’s 79th-best high school basketball player. To get here, he’s built a life around basketball and academics, transferring high schools and spending an estimated 30 hours a week or more around the sport.

Beran is a senior at Collegiate School, a Virginia preparatory school which has most recently produced quarterbacks Russell Wilson of the Seattle Seahawks and Wilton Speight from UCLA. He transferred over from John Randolph Tucker High School, repeating his junior year in the process to get more basketball exposure and recruitment opportunities.

At his new school, he plays powerhouses like the Trinity Episcopal Titans twice a season. After falling 56-50 on the road in the first matchup of the 2018-19 season, Beran got a second chance in front of his own raucous student section, surrounded by green and yellow.

“Definitely a lot of takeaways from that game,” Beran said. “We turned the ball over a lot. Kind of the main thing coming into this game was just ball security.”

Playing point guard for most of the game, Beran led the team to its thrilling victory by pouring in 35 points. The Cougars battled back from 14 down to take a two point lead down the stretch, with Beran sinking 21 of his 25 free throws attempts to put his team over the top, 62-60.

One second, he was smooth, driving the lane and drawing yet another foul. Another, he was explosive, like when he charged down the court for a chasedown block in the third quarter to keep Collegiate’s deficit at 6. At the end of the game, he showed he was cool, sauntering off the court drowning in the pandemonium of teenagers celebrating a close win.

And as it heads toward a losing season, Northwestern needs cool.

‘A comes before B’

Robbie’s mother Paula likes to joke that he’s been exposed to sports since before birth. She played softball and indoor soccer for fun with her doctor’s consent until the seventh month of her pregnancy.

“We’re a sports family,” Paula said. “I believe wholeheartedly that sports is a great segue into real life. You’ll learn to compete and be the best you can be but at the same time you have to learn to cooperate and work with others. To me that’s what life is all about.”

Sports matters — a lot. But to the Beran family, academics is an even bigger deal. At John Tucker High School, where Robbie spent his first three years of high school, he had a 4.23 GPA, he said. At Collegiate, he sports a 3.88.

“One of my favorite things has always been ‘A comes before B,’ you get A’s before you play basketball,” Paula said.

Robbie got As. Now, he gets basketball.

Annemarie Beran, Robbie’s sister and a junior basketball player at Christopher Newport University, said she can’t remember a day when they didn’t play basketball growing up.

The two would face off in one on one games constantly. Sixteen months older, Annemarie had an advantage initially. She’d just back him down for easy baskets, the Shaq to Robbie’s lanky pre-teen self. Things changed as he grew. They haven’t played since she first saw him dunk.

“I could just never ever ever let him have that satisfaction of dunking on me,” Annemarie said. “Once Robbie hit that growth spurt, I was like ‘Oh no, I’m not letting him do this.”

Forty schools extended official offers to Beran, but his family didn’t always know he was good enough to play at the Division I level. First, he received offers from only Division III schools because while he had height and basketball IQ, he hadn’t yet grown into his body.

After Beran decided to transfer to Collegiate, the offers started rolling in. Established basketball schools like Georgia Tech, Boston College and Virginia Tech extended offers and invitations for official visits in a short timespan.

“It was like that feeling of, we’d been seeing it all along,” Annemarie said. “We’re biased, but at the same time, I know the work that Robbie’s put in. It’s just been so rewarding to see him be happy and have these successes.”

Beran took advantage of the interest, heading off on unofficial visits throughout the country to build relationships with coaching staffs and see campuses. At NU, he said it all clicked. The academic context was a major reason Beran chose NU over more established basketball programs with bigger fan bases and more NBA prospects, but not the only one. Not even close.

Beran made his official visit in late September, which was his second visit to campus within a month. He interacted with his future teammates, met with the coaching staff and felt comfortable.

“I was able to interact with the guys and it really kind of felt like home,” Beran said. “I guess since day one I’ve always kind of said, when I feel it I’ll know it. That’s kind of what I found.”

NU needs a player like Beran. The Cats endured through two light recruiting classes from 2016 and 2017 — sophomore Anthony Gaines and junior Barret Benson are the only remaining players. Last year’s class was better, yielding first years Miller Kopp, Pete Nance and Ryan Greer, but none of those players have had the type of seasons that leads to first team All-Freshman recognition in the conference.

With the Cats losing seniors Dererk Pardon and Vic Law, their top two scorers, at the end of the season, they need someone to fill the offensive gap.

Beran could be that guy. A dynamic positionless presence who can play point guard on a team that badly needs one. And maybe, one day, he’ll represent NU in the NBA.

“Obviously I came a long way but there’s still a long way to go,” Beran said. “Before you can even think about that, you’ve got to try to get better every single day. That’s what I try to do, what I try to live by. If that opportunity presents itself I’ll be very grateful for that. And then obviously, you’ve gotta get even better.”