Men’s Tennis: Nearly halfway through the season, Northwestern continues to display its resilience 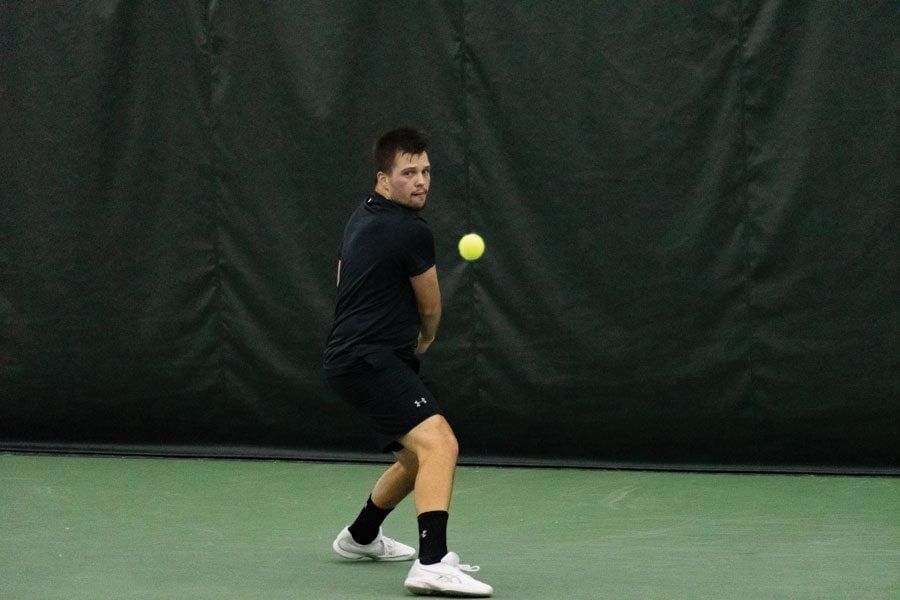 Dominik Stary hits a backhand. He’s been one of Northwestern’s best players this season.

Coming into 2019, Northwestern had started a season with a loss just twice this century. In both of those years, the Wildcats quickly responded by winning their next match.

This season, NU found itself in uncharted territory, beginning its season with four consecutive defeats.

With question marks surrounding a team coming off of a difficult campaign last year, there was reason to think this could be a long season. However, NU (8-5, 1-0) rallied back from that inauspicious start, winning eight of its last nine matches. At 8-5, the team is already one win away from matching its total from all of last season with 14 matches still to play before the postseason.

After the Cats lost to Vanderbilt 5-2 on Jan. 18, sophomore Nick Brookes said the team is at its most dangerous when it’s “relaxed and we’re trying to show ourselves off as best we can on the court.” Winless at the time, NU’s best was yet to come.

With losses to North Carolina State and Alabama following the loss to the Commodores, the Cats finally filled the win column by defeating Auburn 4-2 on Jan. 27. Following the victory, freshman Trice Pickens, who won his singles match 7-6, 2-6, 6-3, provided a simple explanation for his success: “I just competed, worked hard.”

Pickens is one of two freshmen on the team along with Simen Bratholm. Both have demonstrated significant improvement during the team’s turnaround. Pickens has won seven of eight singles matches since that first win of the year, while Bratholm has won five straight.

One of the Cats’ biggest struggles out of the gate was in doubles play. Since the 0-4 start, though, coach Arvid Swan said he’s seen all-around improvement in his team that continued to work hard despite not seeing the results early on.

“Doubles has certainly gotten significantly better, and we’ve been winning a lot of doubles points recently,” he said. “Overall, the teams are just meshing better. They’re used to playing with each other.”

Regarding singles play and the development of his younger players, Swan said both — along with improved doubles play — explain why the team is where it is right now.

As on any team, playing time is not equal. However, Swan noted every member of the team as playing a vital role in the recent success.

“We have great leadership from our senior class. They work really hard every day in practice and have done a really good job in terms of day-to-day making sure we have the right mindset in practice,” he said. “It’s been a collective effort. … It all starts on the practice court pushing each other, and I think we’ve done a really good job of that.”

While NU defeated Purdue 5-2 on Feb. 10 for its first Big Ten win of the season, the Cats will not face another Big Ten opponent until March 1, when they take on Indiana.

Regardless of who’s on the schedule, though, Swan said his mindset is still focusing on the next match and not looking too far ahead.

“I know that sounds cliché, but I think that’s probably the appropriate thing,” he said. “We know we have a lot of good teams that we’re playing coming up, so we’re looking forward to that. … The goal is just to keep improving as a team, playing together as a team and enjoying the process.”