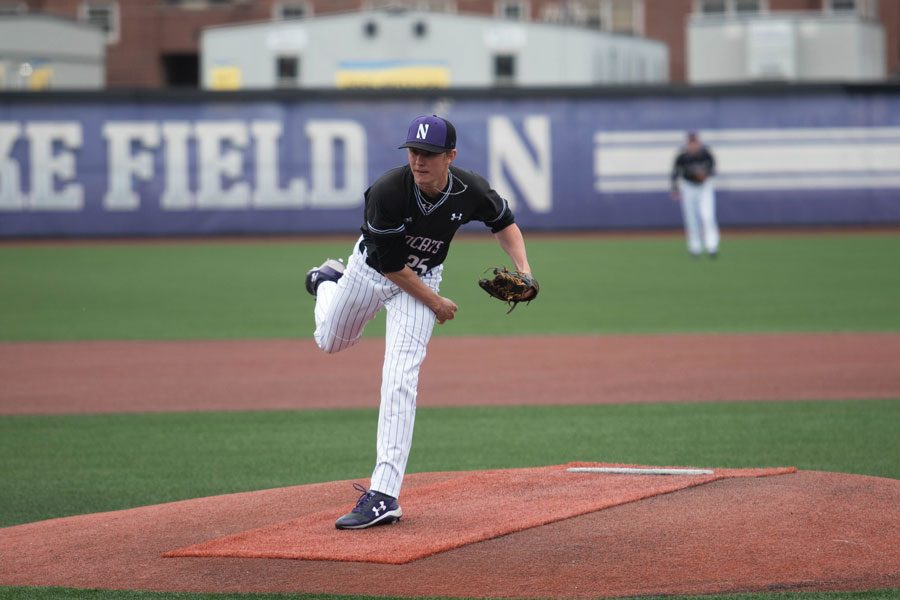 Hank Christie works on the mound. The junior will be NU’s ace in 2019.

Long before the spring warmth thaws Evanston’s snow and frost and baseball returns to Rocky and Berenice Miller Park in March, Northwestern’s pitching staff will look to melt away memories of last season’s conference-worst team ERA.

It won’t be easy, but the Wildcats (2-2) do have something in their favor: Every pitcher who started a game for Northwestern last season returns this year. And with such a big returning presence, coach Spencer Allen isn’t afraid to set lofty goals in the wake of a 17-32 season.

“We want to be one of the top 64 teams in the country, you know,” Allen said. “That’s this team’s goal, we have not shied away from it.”

With the latter half of the rotation up in the air, Allen said he expects to use a wide range of names in the starting pitcher slot on the lineup cards in the season’s early goings. Junior right-hander Hank Christie, who entered this year with 29 starts under his belt, surpassed sophomore lefty Quinn Lavelle as the ace in the rotation. Despite Lavelle leading the team in innings pitched last year, now, he figures to get the ball on Saturdays as the No. 2 pitcher in the rotation.

After the team’s top two returners, the water gets murkier. Sophomore lefty Jack Pagliarini started eight games last season and led all NU starters with a 3.99 ERA. Based on past performance alone, Pagliarini would appear to be a favorite to reclaim a starting role, but in the offseason he transitioned to a bullpen role. In this weekend’s season-opening, Pagliarini came out of the bullpen twice in four games.

Sophomore Ryan Bader and junior Sam Lawrence have brought themselves into the conversation after strong offseason work and seem the most likely to replace him on Sundays. Neither pitched particularly well last season, as both finished with ERAs above 7 and WHIPs near or above 2. However, Allen said Bader had “made strides” as a sophomore and that Lawrence had elevated himself from bullpen constant to consideration for a starting nod. Also, freshman right-hander Mike Doherty could receive an opportunity later in the season if others struggle.

After telling reporters he wasn’t trying to “play games,” Allen admitted that even he wasn’t sure how the rotation will look.

“What we’re trying to do is get guys to compete,” Allen said. “We’ll figure it out. The game will tell us who deserves to play and who deserves to throw on the weekend.”

As the only pitcher with two previous years of experience in the starting rotation, Christie is the most capable player to usher the new starters through the transition. Christie said he focused on developing his leadership skills during the break, as he felt a similar presence was lacking on the team last season. In addition to his personal efforts, Christie said Allen instituted a “leadership council” for the team over the offseason, which divided the team into small groups of roughly five to eight guys across position groups and grades.

The idea, Christie said, was to encourage open dialogue among teammates and to give younger players the opportunity to foster connections with older ones. As a result, the players spent a lot more time together this year than last year and are much closer, he said.

“On top of that?” Christie said. “The changeup always needs work.”

While Christie hopes to establish his locker room presence, pitching coach Josh Reynolds is already impressed with the stability on the mound that the Oak Park, Illinois, native has shown “from day one.” Reynolds said nothing rattles Christie on the bump and that he cares more about getting the opportunity to start than about what spot in the rotation he receives.

He said while Christie’s stats might not have looked great last year — he sported a 3-5 record and a 4.61 ERA — he was a few innings or at-bats from a much different stat line.

“We like his consistency,” Reynolds said. “We know what he’s going to do. He’s going to go out and throw strikes. He’s gonna make the other team beat him, so they’re going to have to swing the bat. And ultimately, that’s what we want all of our guys to be.”

The young players, Allen said, are hungry for opportunity. The older guys are motivated after an inspiring run to the 2017 Big Ten Championship was followed by 2018’s second-to-last conference finish. Allen said he wants to make sure all of the pitchers, especially the ones he uses regularly, are attacking the zone, a skill they only showed flashes of last season.

“There’s also a good mix of guys who are returning who did have some success and were you know, maybe, for lack of better word, a little bit embarrassed,” Allen said. “It’s just who’s going to be consistent… and making sure that we’ve got eight to 10 arms that can go and just continue to attack no matter who the opponent is.”