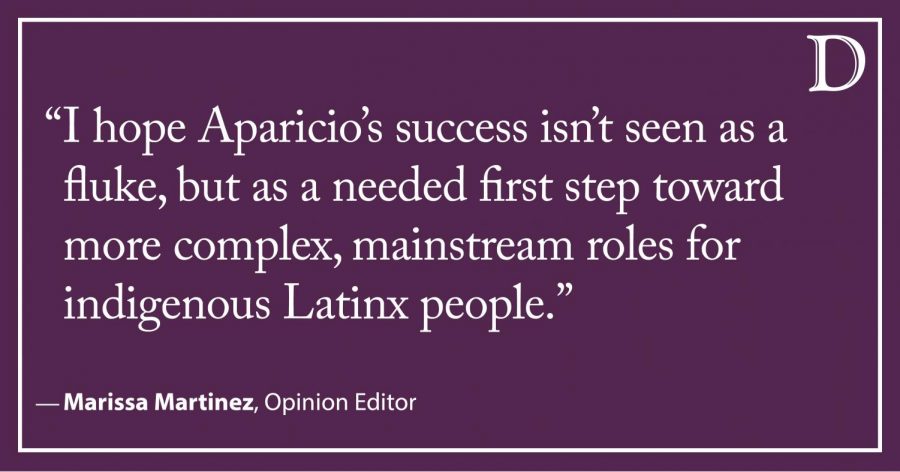 Yalitza Aparicio, the star of the hit Mexican film “Roma,” is coming into her own. Though she was originally training to become a teacher, Aparicio decided to try out for the film’s main character on a whim, never having officially acted before. Instantly, director Alfonso Cuarón knew she was right for the role and worked with her to create a nuanced, beautifully-acted character.

Aparicio, who was nominated for Best Actress in the upcoming Academy Awards, received a lot of deserved attention, not only for her acting skills, but also for the indigenous representation she brought to the big screen. However, the 25-year-old got a fair amount of hate from fellow Mexicans.

Most recently, famous telenovela actor Sergio Goyri posted a video calling Aparicio a “pinche india” (a “f—ing Indian”) who only says “‘yes, ma’am, no ma’am’” in the movie, which didn’t warrant a Best Actress nomination in his eyes. The actress responded to his video saying how proud she is to be a Oaxacan indigenous woman. Goyri walked back on his comments and apologized in an Instagram video, claiming he didn’t mean to offend anyone, and that Aparicio deserved the nomination: “For me, it is an honor to see a Mexican be nominated for an Oscar.” However, his initial comments show how the reaction many have had to Aparicio’s success is deeply tinged with anti-indigenous sentiments.

The movie has brought up a larger discussion, as well: the role of colorism in Latin media. Just as in the United States and many other countries, colorism affects so many daily and large-scale interactions, and it began with European colonization.

Hernán Cortés conquered Tenochtitlán, the former capital of the Aztec empire, in 1521, and with his arrival came mass destruction, slavery and murder. Through the Spanish invasion, many indigenous languages were stomped out by the forced introduction of the Spanish language. It came to represent power and privilege as Spain forced its rule over Mexico. While indigenous people certainly still exist — and have staged many revolutions against colonizers since the first conquistadors attempted to take over their country — the number of languages spoken in Mexico suffered greatly since Cortés’ brutal entry.

In particular, Cortés enforced European racial standards and categories, creating barriers based on perceived racial and ethnic differences. He and future colonizers introduced a caste system including whites, mestizos (those of mixed indigenous and Spaniard heritage), indios (native peoples) and many other subcategories. The system was based heavily on physical features, particularly color. Legal and social discrimination prevented indigenous and low-caste individuals from holding office, practicing some trades and living in certain neighborhoods, although the severity varied by region.

Legal restrictions and slavery were abolished in the 1820s after the independence movement, but European supremacy continued. As time moved on, the lines between castes became blurred as indigenous, white and African people having children together grew more common. Many Mexicans now identify as mestizo while about 12 to 15 percent of the population identifies as indigenous. The divide became more about culture and language than color.

However, this doesn’t mean Mexico moved on from its colorism and racism. Many members of the upper- and middle-classes are more likely to be white-passing than darker, and darker-skinned Mexicans are more likely to be less educated because of institutional and social barriers, which leads to lower socioeconomic status.

The color divide is deeply ingrained in Mexican (and Latin American) media. Telenovelas, or soap operas, are a clear example. Many of the most famous shows, like “Teresa,” “Lo que la vida me robó,” and “La reina del sur” feature very light-skinned actors with European features. When darker-skinned actors appear, they often play members of the help or are depicted as low-income, uneducated and separate from the white-passing characters.

The Netflix reality show “Made in Mexico” received a great deal of backlash upon its release for portraying Mexico’s white-passing elite when the country faces so much class divide. While show producers wanted to illuminate another side of Mexico to counter negative stereotypes, they ended up displaying a whitewashed narrative instead.

Though there is still a large gap in representation, indigenous people are continuing to push back on the industry’s standards. Over the past few decades, the independent film movement has increased representation, especially when it comes to female indigenous producers, who have used the growing digital technology movement as a form of decolonization and empowerment. While said directors and producers are often from privileged communities, the movement is growing more diverse.

A star is born

Through her role as Cleo in “Roma,” Aparicio brought much-needed nuance to the screen, forcing many people to contend with the unfair and systemic treatment of indigenous domestic workers, who are often poorly paid and have little opportunity for social mobility. Indeed, the scenes where Cleo is simultaneously loved and denigrated by the rest of the middle-class family she worked for were heartbreaking to watch. Although set in the 1970s, the film brings up important, albeit uncomfortable, messages about class and race divisions that can be applied to present-day Mexico.

“Roma” doesn’t vilify the family Cleo works for — instead, it shows how easy and ingrained the prejudice and poor treatment of indigenous people is within the home. She is visually separated from the family she works for during much of the movie, despite how much they rely on her work. It’s also important to note that the film is based on Cuaron’s own experiences with his nanny Libo, who helped raise him.

While some white critics of the movie — especially a particularly tone-deaf New Yorker review — claim Cleo’s voice was robbed and missing, it’s this portrayal that calls out the role indigenous women have in many Mexican households, adding nuance that goes over many American heads. This is why Cleo’s role in this movie is so important: Her position in the household is a contentious mix between love and distance. However, because media rarely shows a detailed look at domestic workers in Latin America, that context has to be sought out by viewers after the movie.

During the film, Cleo speaks in both Spanish and Mixtec, a group of languages spoken in Southern Mexico. This portrayal is incredibly powerful, especially considering the erasure of indigenous languages in Mexico since colonization. One scene near the beginning shows the curiosity and fear of non-Spanish languages, as one of the children asks Cleo to stop speaking in Mixtec, a language he does not understand. Viewers can see that when Cleo talks to other indigenous people during the movie in Mixtec, she is more relaxed, more herself.

Aparicio’s entrance into popular media has meant a lot to the global audience. In particular, her January Vogue Mexico issue went viral on social media, as she became the first indigenous woman to be featured on the cover. People across the world talked about how happy they were to see a woman who looked like them in such a visible light. A BuzzFeed Mexico analysis explained that the country’s top magazines typically show photos of darker-skinned people only 20 percent of the time, often accompanying stories about events rather than features.

During her video interview with the publication, Aparicio said, “My skin, very Mexican, very Oaxaqueñan and very human,” and that “other faces of Mexico are now being recognized. It is something that makes me so happy and proud of my roots.” In a country where four out of 10 Mexicans believe they are treated unevenly due to their skin color, according to a 2010 survey, Aparicio’s cover means a lot, even though the country still has a long way to go. On the cover, Aparicio looks regally into the camera, wearing a stunning Dior dress. To her right, the words “A star is born” are written in Spanish and Mixtec.

The Academy Awards are on Sunday, and even if she doesn’t win Best Actress, Aparicio’s nomination has already made history. Very few indigenous people have been nominated for an Oscar, and the only person to win one has been Buffy Sainte-Marie, a Cree woman, for an original song in 1983. Indigenous and native voices have been erased from media for decades, but Aparicio represents a slow but necessary shift from that institutional trend.

Everyone deserves nuanced and accurate representation in the media. I hope Aparicio’s success isn’t seen as a fluke, but as a needed first step toward more complex, mainstream roles for indigenous Latinx people.

Marissa Martinez is a Medill sophomore. She can be contacted at [email protected] If you would like to respond publicly to this op-ed, send a Letter to the Editor to [email protected] The views expressed in this piece do not necessarily reflect the views of all staff members of The Daily Northwestern.