Administrators outline plan for energy use recording, encourage student action at The State of Sustainability 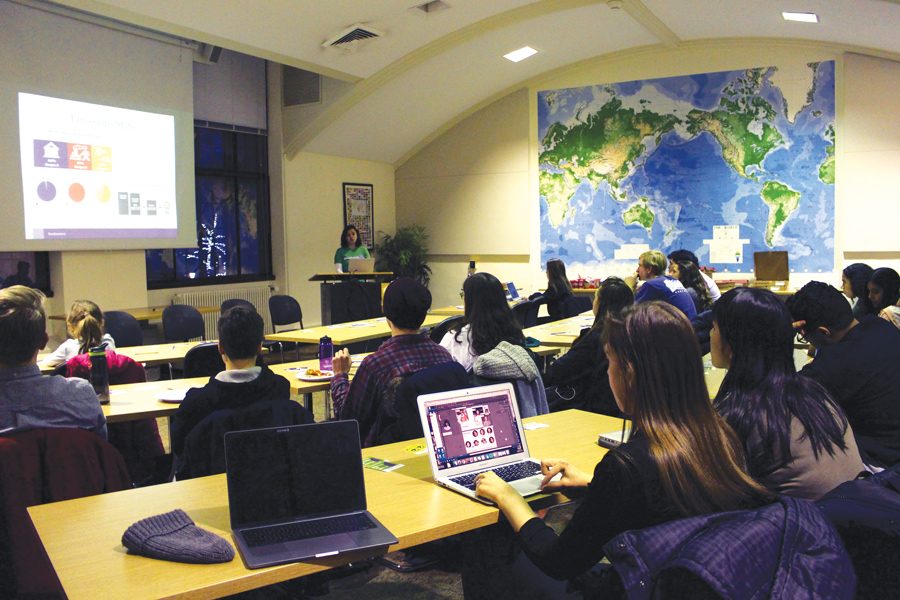 Northwestern students listen to speakers at The State of Sustainability in Scott Hall. The event featured updates from ASG, sustainNU and ISEN about sustainability initiatives on campus

SustainNU, Associated Student Government and the Institute for Sustainability and Energy at Northwestern encouraged students to engage in sustainable practices and advance sustainability throughout campus at Monday’s The State of Sustainability event.

SustainNU announced a five-year strategic plan for campus-wide sustainability programs in October 2017. The framework includes five program areas, including a communication and engagement category, with a goal to “foster a University-wide culture of sustainability and environmental stewardship,” according to the plan.

Students kicked off event by reflecting on their current sustainability practices at Northwestern. Some daily practices students brought up included composting, avoiding single use plastics and walking to class.

Communication sophomore Maggie Olson, a communications assistant for sustainNU, said eliminating single-use plastics is an easy shift the University could make, but understands it will take time.

“Because so much has changed this year, it was good to get everyone together and talk about projects everyone is working on,” she said.

Benitez said sustainNU is working to catalogue the amount of energy used by each building on campus, auditing all of the University’s energy data for the past two years. From this research, sustainNU is set to unveil the Lucid BuildingOS, an interactive tool that will show the campus community how much energy, water and gas buildings on campus are using. The tool is set to be released at the end of April and will be available on the University’s sustainability website, Benitez said.

In addition to the interactive tool, sustainNU is also rolling out utility consumption reports for each building. Through this initiative, building managers will receive a report on how much energy their respective building is using and its associated cost. The data will then be used to improve energy use on campus.

Juan Zuniga, the vice president of sustainability for ASG, said his committee is currently working on composting at residential colleges and Greek houses, creating a grant for student organizations to pursue their own sustainability initiatives and educating students about sustainable practices.

“Ultimately, the University is here to respond to student needs and student demand,” Henderson said. “There a long history of things changing because of student demand.”

While the focus of the community dialogue focused on updating the campus community on various projects, the organizations encouraged students to use their voices to advocate for what they want.

“I wanted students to walk away feeling like they can do something,” Benitez said. “It’s, ‘I am raising my voice and letting administration know that this is an important issue and we need to raise it as a top priority.’”