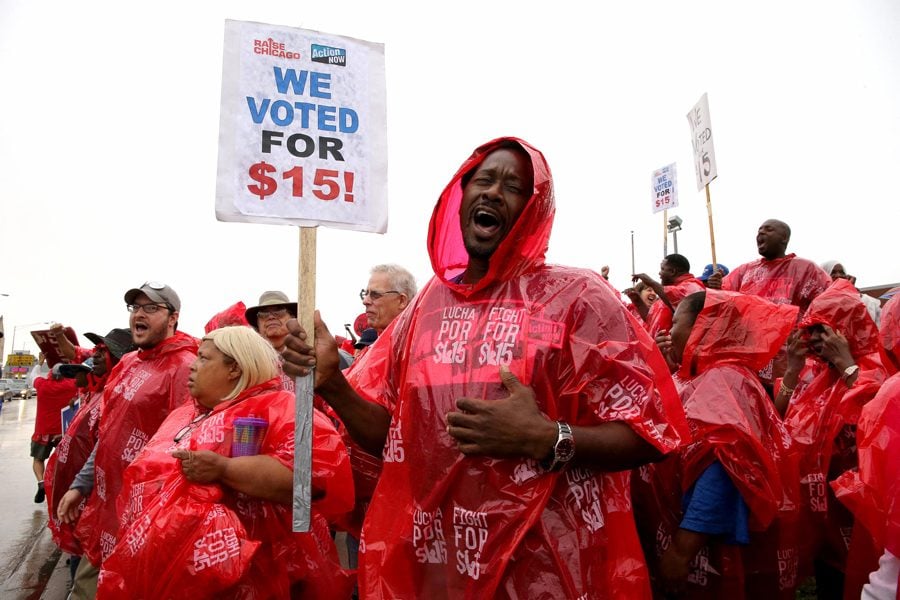 Gov. J.B. Pritzker signed a bill Tuesday morning to increase the minimum wage in Illinois to $15 by 2025, but Illinois residents expressed concern over the rollout of his law.

Illinois will be one of the first states to set a minimum wage this high, joining California, Massachusetts, New Jersey and New York, which all plan to rollout the raise over several years. Pritzker campaigned heavily on this promise, though the law passed the Illinois legislature without a single vote from a Republican representative.

“Today is a victory for the cause of economic justice,” Pritzker said during a ceremony at the Governor’s Mansion in Springfield, Illinois where he signed the bill.

For Chicago resident Fredricka Bowman, these changes can’t come soon enough. Bowman, who has worked minimum wage jobs in the past, said the minimum wage doesn’t pay enough to cover rent, gas and lights, especially as the cost of living in Chicago and Evanston continues to rise. She said she is glad the minimum wage is going up, but people need a living wage sooner than 2025.

“Minimum wage to me is not what I call living,” Bowman said. “If I was governor or if I was a legislator, I would make a difference for people… At least they’d have a living.”

Bowman said she also works with One Northside, a community organization focused on affordable housing, economic justice and education in Chicago, and as an advocate, she knows challenges other community members face while on minimum wage.

On the other hand, Nina Barrett — the owner of Bookends and Beginnings, an Evanston bookstore — also said she supports a living wage, but she emphasized the financial pressures she and other small business owners experience with legislation like the new law. Barrett said as a employer, she understands the need for a living wage, as her staff is the foundation of her business.

Indeed, it was the impact of small businesses that led Republicans and business leaders to oppose the measure.

“It’s very disappointing that a major issue of this type, which is one of the biggest policy decisions we’ll have made in some time — that it’s going to have an impact on every business small and large, every public institution, every nonprofit — that there is absolutely no desire to negotiate with Republicans,” Jim Durkin, the Illinois House minority leader, told reporters last week. “The consequences, short-term and long-term, are going to be very, very devastating upon the state of Illinois.”

For Barrett, an important part of the rollout includes tax breaks to ease the burden on small businesses of increasing minimum wage — tax breaks frequently granted to “juggernaut, monopoly” corporations like Amazon.

According to the new law, businesses with 50 or fewer employees will be able to claim a tax credit for 25 percent of the cost in 2020, though the benefit phase out over the next several years.

Barrett said Bookends and Beginnings would not have a problem with increasing minimum wage, but other small businesses might struggle. She described two pressures on “brick and mortar” retail businesses: they are squeezed out by Amazon and other large companies, and simultaneously, their rents continue to rise. Hopefully, the law will not lead to local businesses closing or cutting hours, Barrett said.

“We all agree, I think, that people should be paid living wages,” Barrett said. “You just have to be careful of the unintended consequences of legislating things that are a good idea, but they’re not a good idea if you haven’t figured out the details of how everyone is supposed to get there.”