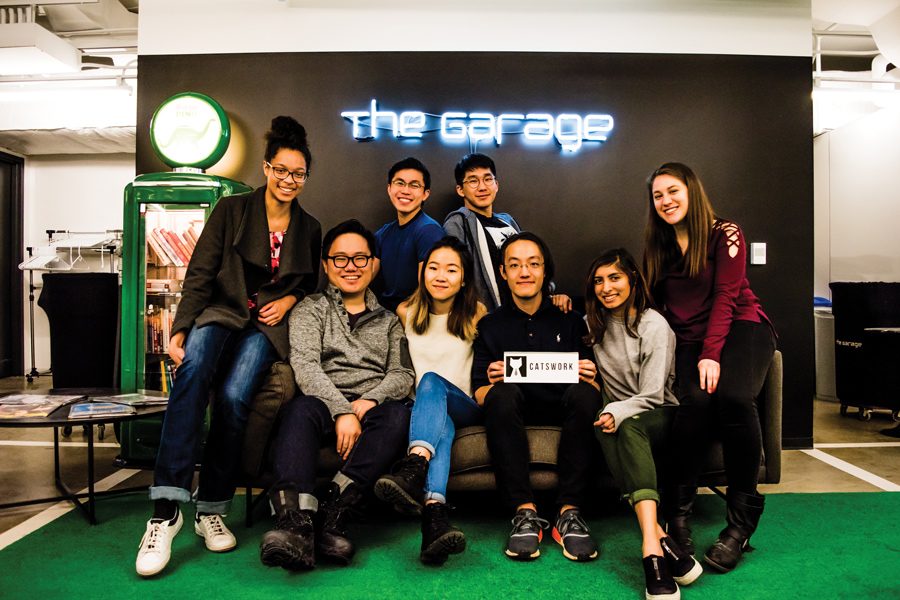 The CatsWork team. CatsWork helps students keep track of their professional connections and supplies them with Northwestern-specific tools and tips to tackle the career process.

A new startup called CatsWork, headed by two NU undergraduates, is aiming to ease NU students’ career transitions by equipping them with tailored resources to navigate the career recruitment process.

The organization, based in The Garage, was started by Weinberg junior Vincent Park and McCormick sophomore Nicholas Tan. According to its website, CatsWork provides “end-to-end recruitment resources that are affordable, quality and curated for Northwestern students.”

Part of the product is a Google Chrome extension, which Tan said is “free for NU users.” Students can use the extension to automatically gather and store key information for the networking process.

“Let’s say you go to LinkedIn to figure out who you should reach out to as a part of your networking journey,” Park said. “Then, while you’re on a person’s profile page, fire up our chrome extension and click the LinkedIn autofill button. Our (product) will autofill networking-specific fields — name, undergraduate school, firm information, position, etc. — and compile it in a Google Sheet which is part of your Northwestern Google suite.”

Tan said because it’s important to expand your network during the networking process, finding internships and job opportunities inevitably includes reaching out to many people. Through the extension, Tan said students will be better able to organize and centralize their contacts, allowing them to pinpoint firms they haven’t reached out to and avoid feeling overloaded.

Students can also use the extension to steer their career processes. For example, Park said, one student may look at their personalized spreadsheet and see they’ve reached out to five contacts at J.P. Morgan but none at Goldman Sachs. That student can use analytics from the extension to diversify their networking strategy.

“We find successful people at Northwestern who have been through the recruitment process already, and then deliver their personal insights to people on Northwestern’s campus,” Park said.

Park added that they were inspired to create CatsWork when they observed a shortage of NU-specific resources for the career process. He said there’s a gap between what students want and what students have as they’re going through their recruitment journey.

To bridge that divide, Park added that CatsWork is in the process of considering partnerships with Northwestern Career Advancement. He said by the end of this year, CatsWork hopes to tap into 30 to 40 percent of the projected market of undergraduate students.

Both Park and Tan emphasized the importance of CatsWork’s nine-person team, stating that the success of the organization has only been possible due to the group’s hard work. For both Park and Tan, CatsWork has been a huge team effort.

Hayes Ferguson, the associate director of The Garage, said in an email to The Daily that she applauds CatsWork’s “efforts to come up with solutions to problems.” She said the team at The Garage would be happy if the business is successful in creating a practical solution to ease students’ career transitions.

“We want to create resources specific to Northwestern students and offer them tools and ways of improving their experiences,” Tan said.