50 Years of Queer Anger: Queerness at the Grammys 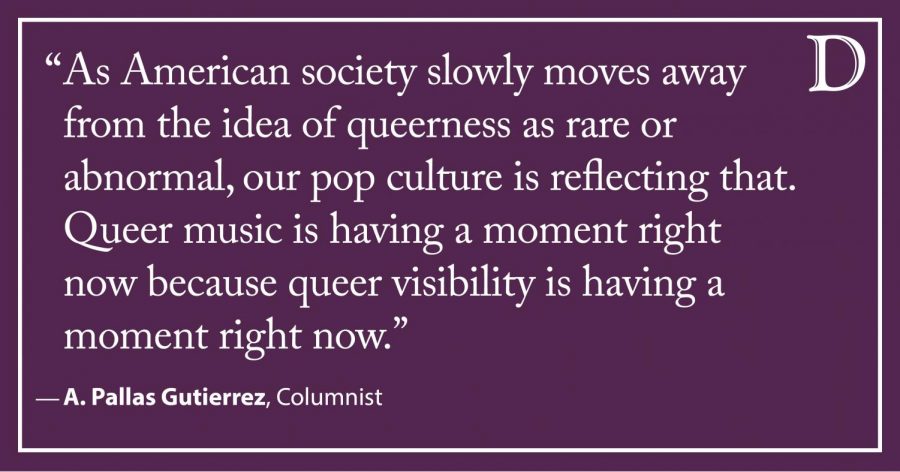 This is the fourth column in “50 Years of Queer Anger,” a series examining LGBTQ+ issues in the United States since 1969.

Queerbaiting, the practice of presenting material as queer without making the queerness explicit, is rather common in the music industry. A recent example is the music video for “break up with your girlfriend, i’m bored,” in which Ariana Grande flirts with a woman. Although the title led many to think Grande was trying to catch the attention of a man, parts of the video imply that she wants the couple to break up so Grande can be with the girlfriend. The video ends right before the two women kiss, which has led to criticism that Grande is queerbaiting.

There is the possibility that Grande isn’t straight and is using this moment to come out, but since the video was released a week ago and Grande has yet to respond to the controversy one way or another, this was probably not her intended message.

An older example of musical queerbaiting is Katy Perry’s “I Kissed a Girl,” in which she relays her experience with a woman. The song is clearly meant to shock her audience, as she sings, “Lost my discretion,” “It felt so wrong” and “I hope my boyfriend don’t mind it.” These lyrics imply a certain shame around queerness, which, although understandable with Perry’s conservative Christian upbringing, were also my first exposure to queer women in popular music. I’m sure there are many other people my age who, as young Perry fans, absorbed the idea of queerness, especially queerness in women, as simultaneously taboo and performative.

Especially with the prevalence of queerbaiting in mind, it is reassuring to see explicit queerness on stage at the Grammys this year, as well as to see it represented in multiple categories. Queer music is so often only heard from pop stars like Troye Sivan and Hayley Kiyoko that it becomes hard to remember that other genres of music can be queer. Lesbian folk singer Brandi Carlile won three Grammys in the American Roots and Americana categories, and was the most-nominated female artist. St. Vincent, a queer rock musician, performed a mashup with Dua Lipa and was nominated for three Grammys. Janelle Monáe performed her song “Make Me Feel,” during which she alternated saying, “boy you make me feel,” and “girl you make me feel,” making the bisexual+ content of the song explicit.

Awards shows are often even more monolithic than the already exclusionary industries they represent. In the past fours years, both #OscarsSoWhite and #GrammysSoMale have brought scrutiny on those awards for their lack of diversity, so seeing queer artists like Carlile, Monáe and St. Vincent on a national awards broadcast give me hope that the music industry is diversifying. The music industry is still very male-dominated, and song lyrics are very straight, but that’s changing. Albums like Troye Sivan’s “Bloom,” Hayley Kiyoko’s “Expectations” and Janelle Monáe’s “Dirty Computer” resonated with queer audiences because of their explicitness about the queer themes and their diversity; each artist comes from a different background and reflected that background in their album.

As American society slowly moves away from the idea of queerness as rare or abnormal, our pop culture is reflecting that. Queer music is having a moment right now because queer visibility is having a moment right now. Since the 1970s, queer people have been saying, “We’re here. We’re queer. Get used to it.” It seems like the music industry at least is finally getting used to it.

A. Pallas Gutierrez is a Communication first-year. They can be contacted at [email protected] If you would like to respond publicly to this op-ed, send a Letter to the Editor to [email protected] The views expressed in this piece do not necessarily reflect the views of all staff members of The Daily Northwestern.