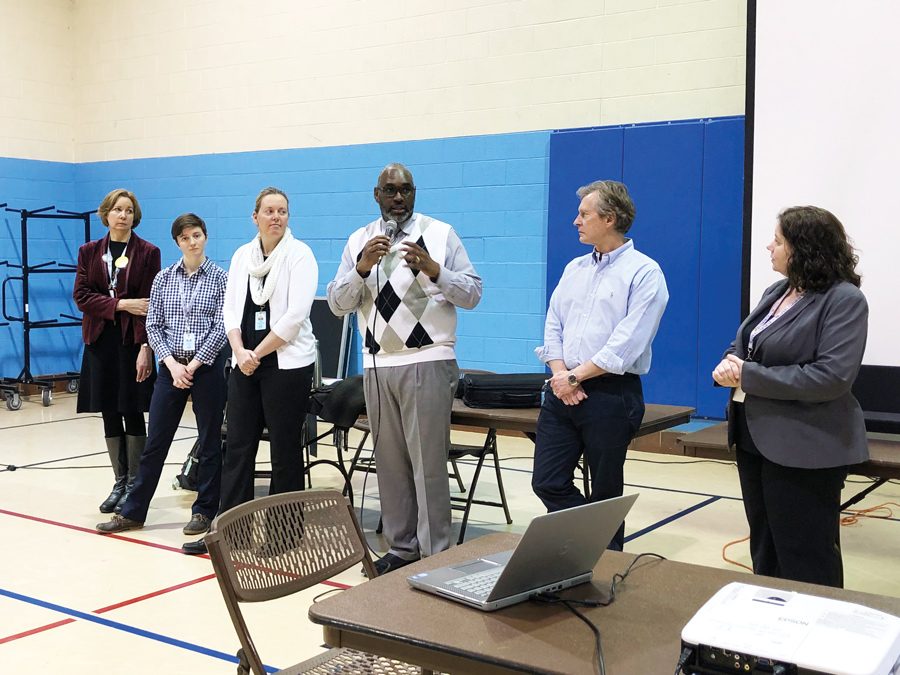 Over a hundred residents joined city officials to share their thoughts on the upcoming Robert Crown Community Center at a Wednesday community meeting.

In July 2018, the city began construction of the Robert Crown Community Center. With two ice rinks, a daycare center and a branch of the Evanston Public Library, the new center is scheduled to open fall 2019.

The project is estimated to cost a total of $53 million, though it was originally projected at about $30 million. To cover the increase, the city raised the debt limit in June 2018.

Friends of the Robert Crown Center has already donated $12 million to the project. Northwestern and local private high school Beacon Academy both plan to use the ice rink, and have agreed to contribute $1 million and $500,000 to the capital fund respectively.

Evanston resident Diane Thodos stood in front of the residents lined up to speak for over two hours holding a “taxation without representation” poster.

Thodos said she is concerned the rise in taxes will “eviscerate” the Evanston community. She said the public is funding the “privatized interests” of Northwestern, whose club hockey team will use the ice rink space.

“(The city) is sucking the community dry with their privatized interests… for Northwestern to have their own hockey team,” Thodos said in an interview.

Thodos said Northwestern needs to contribute more to the project because the University does not pay income taxes to the city that residents do.

Resident Leslie McMillan also asked why the community center was never on the ballot. McMillan, who has spent 30 years in finance working on both private and public projects, said she has never seen a project before with no explanation for funding plans.

“We look to you (Ald. Wilson) to make decisions for this city, but we also look to you to be fiscally responsible,” McMillan said.

In response, Wilson said residents never suggested a referendum when aldermen were voting on the center. He emphasized that the city held 30 community meetings throughout the development process, and the $12 million raised by over 1,000 community members speaks to the need for new facilities.

Wilson said Evanston residents don’t have equal access to resources, a difference “reflective of a demographic divide.” He emphasized that all residents deserve to have quality services, which he said the new Robert Crown Community Center could help offer.

Wilson said he himself used the Robert Crown Community Center when his children were growing up.

“We used daycare here … I coached basketball here in this gym —  I know that there’s not enough room on the sides,” Wilson said. “Long before I ran for alderman, I would come watch the ice show and see water pouring from the ceilings.”

Marina Marich, a board member of the Evanston Youth Hockey Association, agreed children “deserve books and basketballs, not buckets collecting water.” She also reiterated the financial support from the community for the project. Marich called the recommendations to slow down and halt construction “unacceptable.”

Thodos said the city never explained the drastic increase in cost estimates from $30 million to $53.4 million. She said she is concerned with how “hidden” the process has been.

“I get mighty suspicious when we find such a penurious money given to this kind of project,” Thodos said. “This language tonight … it’s leaving out a big portion of your fiduciary responsibility to your community.”