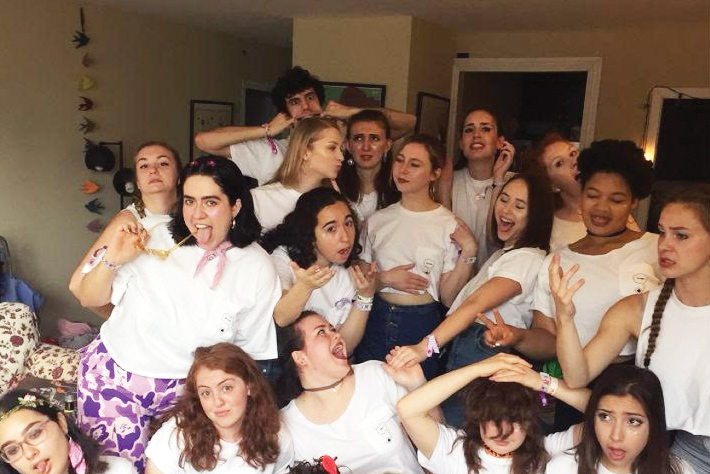 Lipstick Theatre strives to address issues surrounding women through performance. Their new feminist play book club, fLIP the Script, will launch at the end of the quarter.

Ever since performing skits with her middle school mother-daughter book club, Communication sophomore Natalie Welber has always had a love for reading. Now the literary manager of Lipstick Theatre, Welber is carrying that passion into her own feminist book club: fLIP the Script.

fLIP the Script is a new intersectional feminist play book club hosted by Lipstick Theatre aiming to shine the spotlight on works written by women. According to its website, Lipstick strives to address issues surrounding women through performance and provide a platform for female theatre artists to express themselves. Pointing to the board’s activist mission, Welber said fLIP the Script aims to increase the presence of feminist works on campus and engage with the community.

Being a theatre major, Welber said she felt stuck reading and studying only plays written by Shakespeare or other cisgender white men. She said she hopes fLIP the Script will expose students, especially those in theatre community, to a wider variety of voices.

“Hopefully in the next few years, it will trigger more diversity in the playwrights of the plays that we produce on campus, and the plays that people talk about in academic papers for class,” Welber said.

As a first-time book club leader, Welber said she wants to seek advice from her English professor in order to better facilitate discussions. She said while she plans on preparing a list of prompts for the first meeting, she hopes people will start proposing their own as the group progresses.

Although the concept of fLIP the Script might seem “theatre-centric,” Welber said she hopes to bring members from a wide range of backgrounds and interests to the book club. She said she wants fLIP the Script to be a “chill and low-key” space where members can simply hang out, share thoughts and learn something new through the plays.

Communication junior Lydia Hartman, who is the co-chair executive of Lipstick Theatre, added that fLIP the Script allows the StuCo board to expand its outreach and initiate conversations on campus. She said all perspectives are welcomed in the group’s discourse around women playwrights.

Looking forward to the first meeting of the book club, which is scheduled to take place during reading week, Communication sophomore Elisa Swanson said she hopes people realize plays can be fun to read and easy to resonate with.

Swanson said she is excited to take away “a whole new repertoire” of feminist plays to put in her “back pocket” for future projects. Along with providing exposure to new work created by women, she said fLIP the Script offers a space to discuss the different layers of meaning that feminism holds.

Hartman said the purpose of a feminist play is to present a woman’s experience and further prompt readers to reflect on the position of women in everyday life and the significance of the feminist movement. Feminist plays can either subvert or expand “dominant cultural understandings of what it means to be a woman,” she said.

“Feminism as a whole works to embrace and empower every concept or aspect of womanhood at any and all axes of life,” she said.