Residents push back on development plan at Reese Avenue 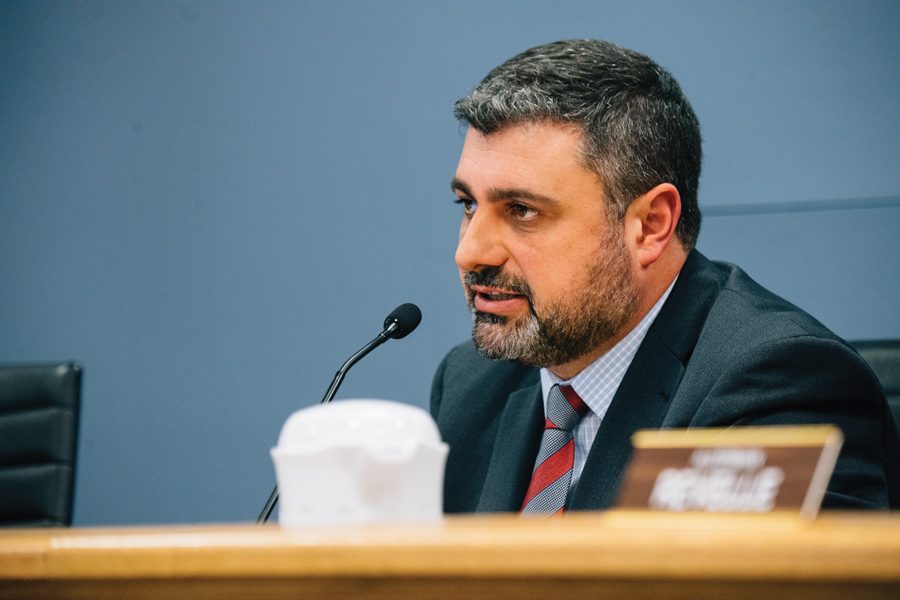 Ald. Thomas Suffredin speaks at City Council. Suffredin listened to concerns from his constituents about a proposal for 2626 Reese Ave.

Evanston residents raised concerns about a possible development in the 2600 block of Reese Ave. at Monday’s City Council meeting, after the Zoning Board of Appeals denied the developer modifications to zoning rules.

Property owner William James proposed a 1,018 square foot home on the corner lot. According to city documents, James asked for exceptions to the side yard setbacks — the horizontal distance at a right angle to the nearest wall of the building. He also requested excess building lot coverage.

The Zoning Board of Appeals said the proposal failed to meet standards for major variation, arguing the development would impact neighbors’ property values, according to city documents. The city also recommended eliminating one parking spot to reduce the excess building lot coverage.

James sent in a revised proposal Monday morning. Ald. Thomas Suffredin (6th) called the revised submission “unusual” because of the quick turnaround time, and he asked city staff to review the updated proposal at another City Council meeting. Suffredin said he wanted to maintain a fair policy to other applicants. Ald. Don Wilson (4th) agreed and asked for discussion at a future meeting.

Evanston resident Richard Horsting lives on the south side of James’ lot. Horsting described the development plan as “deceptive and fraudulent.” He said James has not portrayed his home accurately and emphasized that aldermen should carefully examine the new proposal.

Horsting added that the development process has been “a little ridiculous, a little tiring.”

“The amazing amount of stress it’s putting on me … I get literally five people a day … realtors or lawyers thinking my house is going to be torn down or is involved,” Horsting said. “I’ve been (in) the house 33 years. My family has owned this (property) for over 100 years.”

Resident Kathy Miller said neighbors in the area have met to discuss their concerns about the development plan and agreed the development lacked permeable surfaces for water runoff, exceeded the maximum lot coverage and would possibly require cutting down trees in the neighborhood. Miller added that the neighbors also felt that placing a parking garage in such close proximity to a commercial alley was a potential hazard.

Miller emphasized that the new proposal failed to address any of their concerns.

“We do not feel this gentleman is answering our concerns on these issues,” said Miller. “What we think is fair is any new proposal should go to the Zoning Board of Appeals. They’re your experts.”

Resident Joseph Paradi said James turned down his offer of $25,000 for the property. Paradi said he wanted to ensure it “remained undeveloped for the good of neighbors.”

Paradi also stressed the need for “greater transparency” from the city.

“Lengthy letters from the applicant… were withheld from city staff until the packet was issued, thus not allowing any response from citizens of Evanston,” said Paradi.