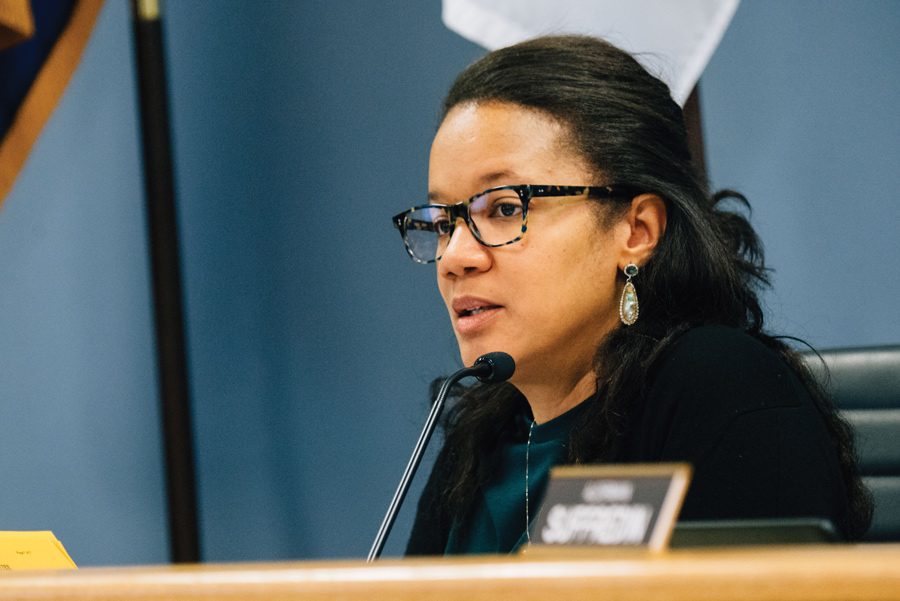 Ald. Robin Rue Simmons at a City Council meeting Monday. Rue Simmons wants to put policy behind CARP and garner support from Evanston’s business and service community for the plan.

In its new Climate Action and Resilience Plan, Evanston seeks to use an “equity-centered lens” to help residents overcome barriers to achieving climate change objectives.

As one of the plan’s three guiding principles, the equity focus seeks to aid community members who are unable to afford the costs of adapting to climate change. CARP’s implementers will seek guidance from outside advisers, including from the Urban Sustainability Directors Network — a network of local governments with a framework to help identify the best way to help the environment and disadvantaged populations at the same time.

“An equity lens or equity framework is really just adding another layer of inquiry to things that a municipality does to determine whether or not it is affecting or burdening certain population groups,” said Jane Grover, chair of Evanston’s equity and empowerment commission.

In 2017, Mayor Steve Hagerty appointed a group of 17 community members to develop the plan. CARP, which City Council approved in December, already has ambitious goals like achieving carbon neutrality by 2050 and 100 percent renewable energy by 2030.

According to the plan, low-income, immigrant, refugee and minority populations tend to experience increased risk of environmental harm but have less of an ability to adapt to the issues of climate change.

“The environmental needs might have to take a back seat to families that are prioritizing managing high property taxes, managing high housing expenses, educational costs, lower wages,” Rue Simmons said. “Those families may not be able to participate as fully just because of their more urgent needs.”

While the city is scheduled to introduce specific actions to achieve CARP deadlines in March, there are already obstacles to achieving an equitable distribution of responsibilities that still helps achieve the plan’s goals of carbon neutrality and 100 percent renewable energy.

Kumar Jensen, Evanston’s sustainability coordinator, said the traditional problem with reconciling equity and sustainability is figuring out policies that prepare residents for the impacts of climate change without increasing the cost of living or creating affordability barriers.

“You may have a resilience goal or an action that actually increases the cost of properties or the cost to do a renovation of your property, and it may actually require more energy to do that, like maintaining a backup generator or doing other power redundancy things,” Jensen said. “If they’re not offset in some way… it would increase emissions and may also inherently come with an additional cost.”

Jensen said the city is developing a study in Evanston that would examine affordable housing and low- and moderate-income housing to identify barriers to achieving net-zero building emissions.

“We recognize that just moving buildings, or getting recertified or having other green credentials can often increase property values and rent and can have a gentrifying or a displacement effect upon long-standing populations,” he said.

However, Jensen said CARP and its equity-centered lens mean nothing without the force of policy behind them.

While the plan lays out several goals for the next few decades, Jensen said the plan’s objectives may not be strong enough to deal with the uncertainties surrounding climate change.

“We recognize that it’s incredibly ambitious, but it might not be ambitious enough,” he said. “We’re really looking to the state and federal government to up the pace to help with some of these things as well.”