By centering around the passions of Queen frontman Freddie Mercury, the film gives Rami Malek free rein to deliver a standout performance 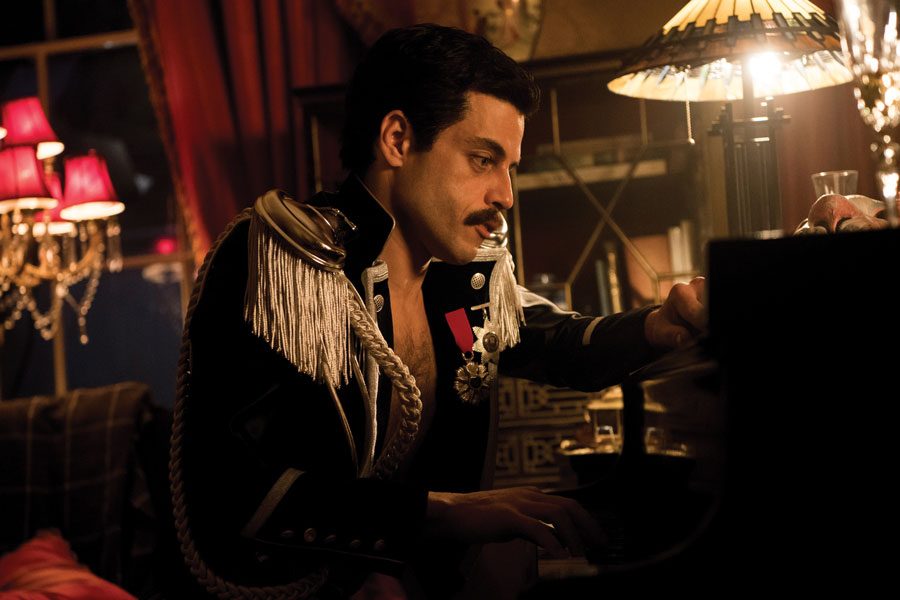 If this Queen biopic doesn’t rock you, then Rami Malek most definitely will.

Highlighting some of Queen’s most memorable musical moments, “Bohemian Rhapsody” has an infectious energy that will lift you off your seat and make you want to start stomping and clapping along to some of the band’s greatest hits from the past century. In a Best Picture race that includes three more ambitious biopics (“BlacKkKlansman,” “Green Book” and “Vice”) and another tear-jerking musical feature (“A Star is Born”), the film shines through its young, believable cast along with a sensitive direction of Queen’s years-long trajectory from an enthusiastic band of artists to rock history’s most epic performers.

Malek is no longer the diamond-in-the-rough actor introduced to us at the turn of the decade. His performance as Queen frontman and universally-adored idol Freddie Mercury is calculated yet instinctive, and Malek moves through the highs and lows of the artist’s life with assertive steps and a commanding attitude.

Whenever Malek is on screen, you can rarely take your eyes off him. On stage, his Mercury enthralls the thousands that watch him; behind the scenes, he is near-goddamn divine. At the third act of the film, which has faced criticism for its sweeping disregard of Mercury’s queer identity, the character feels defenseless for the first time, but Malek still manages to deliver a knockout performance at the “Live Aid” concert, a scene that will be remembered long after awards show season.

Despite the changes in leadership, the direction doesn’t feel queasy. By contrast, it is outright audacious in placing Mercury at the center stage to explore his vision and his passions, while employing other bandmates as mere foils to his genius: characters that are too timid, too reserved, too “silent” to skyrocket the band into stardom. One of the movie’s recurring jokes is how drummer Roger Taylor and the producer of Queen’s fourth album wished to release a song titled “I’m in Love With My Car” as its lead single as opposed to the operatic, irrational, 6-minute-long and intensely hair-pulling “Bohemian Rhapsody” that has since defined the band’s legacy. In moments like this, it’s clear that Mercury is the film’s sole star, and that any other iteration failing to spotlight him as such would be a disservice — to him, and to Queen.

And the score helps elevate him, too. John Ottman, a frequent collaborator of the film’s first director, Bryan Singer, perfectly blends previously unreleased recordings with Malek and another singer’s voices to create the iconic “Live Aid” scenes. The placement of every song complements the arc of the band’s growth so nicely that, by the end, the performance of “We Are the Champions” will move you to tears.

But even “Bohemian Rhapsody’s” depiction of Mercury and the rock band is flawed. Perhaps a bolder film would’ve put more thought and nuance into Queen’s hedonism — after all, they did have a launch party in which guests snorted cocaine off trays strapped to hermaphrodite dwarves’ heads — as well as Mercury’s closeted sexuality and HIV diagnosis, which inspired him to delve deeper into his psyche to compose songs like “Who Wants to Live Forever” and “The Show Must Go On.” And if a bolder film does, maybe it will make up for the shortfalls here.

At the end of the day, “Bohemian Rhapsody” succeeds at painting a rich, technicolor fantasy of Queen’s life. It is flashy, sensational and at times vulgar and raw, but it’s never tasteless. No matter if you’re a die-hard fan or a new inductee to the band’s music, you’ll watch the end credits in tears and singing, for months to come and at the top of your lungs, burning through the sky. No one can stop you now.