Closson: The Daily’s publisher must hold itself accountable to the racial diversity it hopes to see in our newsroom 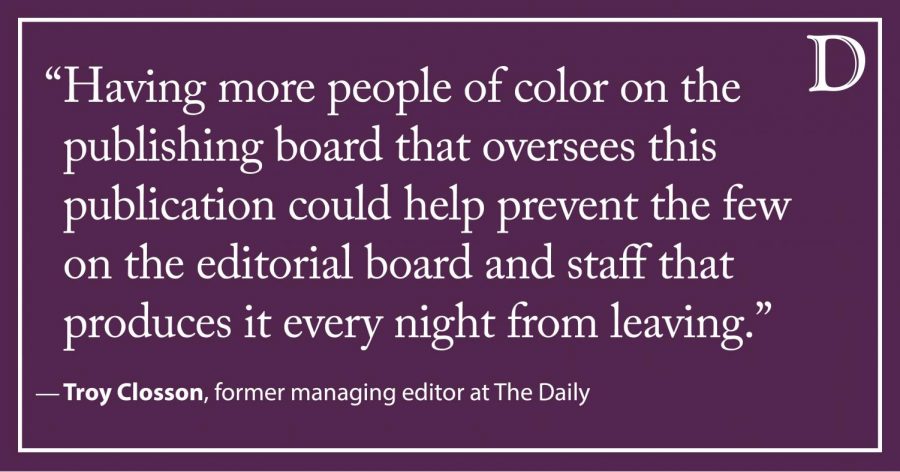 This winter’s been the first quarter in over a year I haven’t been on The Daily’s editorial board because I’m on Journalism Residency. In all that time, there’s only three things I ever really cared about here: making the newsroom a more enjoyable place, improving racial diversity and inclusion and having that reflected in our coverage.

When I first got here, every time I walked into our newsroom, I was the only black person here. When I joined our editorial board the next fall, I was the one black editor. And for a long time, part of me hated being here.

But I forced myself to stay, out of fear that future black staff members would leave too after feeling the same way. I worried that the conversations I’d hoped would take place surrounding racial diversity and inclusion would never get started without people of color here to drag them to the table. And for the most part, that’s no longer the case. Looking in from the outside, I’m sure it’s not always evident. We still have a long way to go, but so much has changed internally over the past few quarters.

More and more though, I’ve realized all of that means nothing if those who make up the leadership of our newspaper’s owner and publisher — Students Publishing Company (SPC) — don’t reflect the people who work here. The nonprofit’s majority-white board, composed largely of alumni and faculty, selects editors in chief and considers greater structural questions about promoting diversity in the newsroom, among other things.

And, in my eyes, the board still operates under expectations that people of color — rather than the newsroom as a whole — should take charge when it comes to racial diversity and inclusion. Back when I was the opinion editor — and the only black editor — members of SPC’s board singled me out in what felt like placing the responsibility of making the newsroom “diverse” on me. The editor in chief and managing editors — the people actually in charge — weren’t brought into those conversations when they should’ve been. And I’ve been in other discussions in which members place the burden on underrepresented racial minorities in the newsroom alone to “solve” strained relationships between The Daily and marginalized groups on campus.

Last quarter, members of the board spoke with the editor in chief, other managing editor and I about programs to create a more inclusive environment that supports and retains people of color and those with other marginalized identities. But of all the nights I felt crushed under the pressure of being the only black person in the room at a paper with a history of poorly covering the campus’ black community — of all the times I considered quitting — I never wanted to quit more than after how I was made to feel by members of the board last winter. And the environment in the newsroom itself was the only reason I stayed.

When I was opinion editor, I was emailed asking for advice on what the board could do to help achieve greater racial diversity and inclusion here. I never responded because I was so annoyed that I, as one of the few black people here, was relegated to dealing with this — regardless of whether it was something I care about. Last quarter though, I realized there’s only one thing to say in the first place:

Having more people of color on the publishing board that oversees this publication could help prevent the few on the editorial board and staff that produces it every night from leaving.

And that’s where the SPC board needs to start. It’s no surprise that with the board’s overwhelmingly white composition, the last time we had a black editor in chief was nearly 15 years ago, and this quarter’s the first we’ve had a person of color lead the paper in years. That’s not to say those people applied, but even creating an environment where people of color feel comfortable doing so in the first place can come from who is — and isn’t — represented among the leadership of The Daily’s publisher. It’s pretty apparent perspectives are being lost among the homogeneity of its members. And that affects our newsroom.

I do believe Students Publishing Co.’s board cares about increasing diversity and inclusion at The Daily. But good intentions mean absolutely nothing.

At least they didn’t for me.

The impact does, and the racial makeup of the board is part of the problem its members hope to solve.

Troy Closson is a Medill junior and a former managing editor at The Daily. He can be contacted at [email protected] If you would like to respond publicly to this column, send a Letter to the Editor to [email protected] The views expressed in this piece do not necessarily reflect the views of all staff members of The Daily Northwestern.