Men’s Tennis: Northwestern wins two of three matches this weekend to improve to 5-5 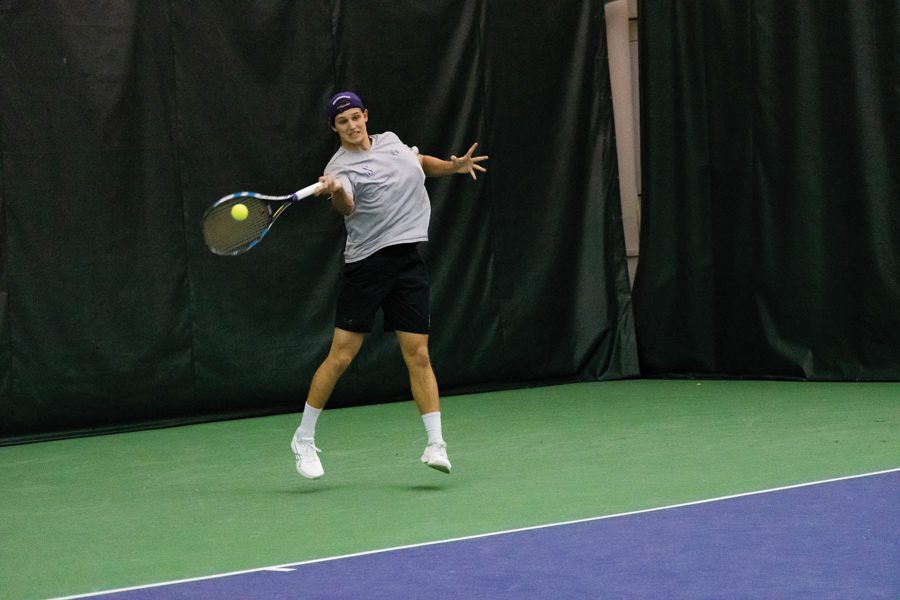 Chris Ephron hits a forehand. The junior helped lead Northwestern back to a .500 record.

For many teams, starting off a season by losing their first four matches can signal the beginning of a down year. For Northwestern, that has been anything but true.

“I feel like we’ve made a lot of progress in the return games,” he said. “Also the teams are used to playing with each other. The teams are increasingly more comfortable with one another and just overall.”

Freshman Trice Pickens lost his doubles set with sophomore Antonioni Fasano on Sunday, 6-2, but proceeded to win his singles sets 6-3, 6-3. The key to not getting too down after losing his doubles set, he said, is having a short memory and keeping “the bigger goal in sight.”

Junior Dominik Stary had the reverse outcome, losing his single sets 7-6, 6-4 but winning his doubles set with junior Chris Ephron, 6-4. Despite the loss in singles, Stary had won his previous three singles matches. Swan said this can be attributed to Stary’s attitude, effort and focus.

“The fact that (Stary’s) returning quite well and playing some good offense off serve too is good, and he can always play good defense,” Swan said. “I thought he did a really good job of in his game style playing aggressively.”

Freshman Simen Bratholm has also been a major component of the team’s recent success. He won his singles match against Harvard 6-3, 6-2 and against Purdue 6-1, 7-6. After having the chance to adjust to collegiate tennis, Bratholm said he’s been “playing a bit more stable” with his shots. He said he also hasn’t been making unforced errors like he had been earlier this year.

When looking at how well the team fared in the past week of matches, Pickens said he and his teammates were motivated to turn the season around.

“We’re maturing, we’re competing hard,” he said. “We’re a pretty young team and we’re starting to really figure out what we got to do to win.”

Overall, Swan said the improvement he has seen from the entire group is representative of his team’s character. He acknowledged that they are not worried about their record, but instead on continually improving.

“The focus and improvement doesn’t happen by accident, it’s through a lot of hard work and dedication from our team,” he said. “We’ve made a lot of progress both in singles and doubles, so (I’m) just incredibly proud of the efforts thus far with the guys.”