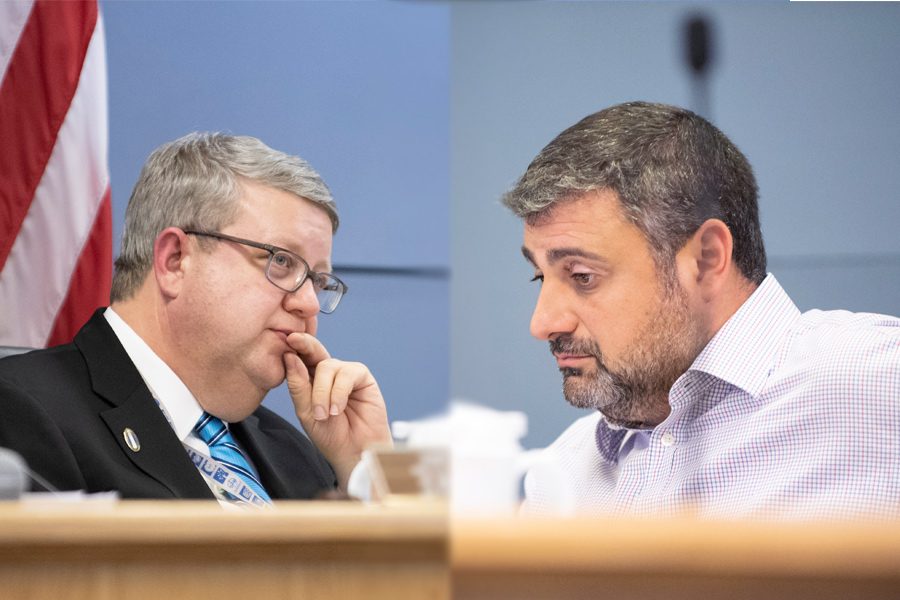 City manager Wally Bobkiewicz (left) and Ald. Tom Suffredin (6th). Suffredin on Thursday sent out an email calling for public discussion of a potential successor for Bobkiewicz and calling into question his loyalty to Evanston.

Ald. Tom Suffredin (6th) on Thursday sent out an email to his constituents, calling for a public discussion about the city manager’s job performance and allegiance to Evanston.

Suffredin said in a ward newsletter that city manager Wally Bobkiewicz should “be good to Evanston and place the city above his own personal and professional interest.” He is asking for an “open and transparent public discussion” about Bobkiewicz’s job performance and his “open and (unapologetic)” desire to leave Evanston.

In interviews with The Daily and the Chicago Tribune, the mayor and aldermen have expressed their disagreement with Suffredin’s claims and position. Bobkiewicz declined to comment on the matter.

Bobkiewicz, who has been city manager in Evanston since 2009, has applied to a number of jobs outside Evanston — mostly in the Pacific Northwest, which is closer to where his wife’s family lives. He was named a finalist for a county administrator position in Oregon earlier this year, which ended up being filled by another candidate. In 2017, he withdrew his application for the position of city manager of Tacoma, Washington after being named one of four finalists. He said at the time that he was “not yet ready to leave Evanston.”

In his newsletter, Suffredin wrote that “there is no succession plan, no timetable and there has been no public discussion” to account for Bobciewicz’s potential exit.

“This stagnant, purgatorial existence is not good for Evanston,” he wrote. “We have a responsibility to put Evanston’s future above all else.”

In an interview with The Daily, Suffredin said the situation is “the elephant in the room.” He said he worries for the city’s lack of long-term planning and that the current city manager is being allowed to stay “as long as he wants until he finds a job that he wants somewhere else.”

He said residents are not being kept informed on the potential issue.

“People ask me about it and I tell them I don’t know,” he said. “We’re just waiting to see if the city manager finds a job somewhere, and then I guess we’ll start looking for our next city manager then. The council needs to exercise authority and oversight on a more regular basis.”

Ald. Donald Wilson (4th) told The Daily he does not feel it’s “appropriate” for Suffredin to address a personnel concern in such a public matter.

Wilson emphasized that the city manager in Evanston is an employee of the city, hired by aldermen to enact council policy. Evanston operates under a council-manager form of government, which means that in addition to enacting policy, Bobkiewicz also manages the city staff, advises council members and prepares the city’s annual budget. To hire or fire a city manager, seven of nine sitting aldermen must vote in approval, according to Evanston City Council rules.

Suffredin said he doesn’t know where the “perfect place” is for him to speak to his constituents and that he felt the newsletter was a good medium since he doesn’t have a social media presence.

Wilson said he would be comfortable with aldermen talking about a potential succession plan in case Bobkiewicz does end up leaving Evanston but felt as though Suffredin’s newsletter and the language used within was “inappropriate.”

“The city manager is an employee of the city, so, just like any other employee, their personnel matters should be treated like other employees,” Wilson said.