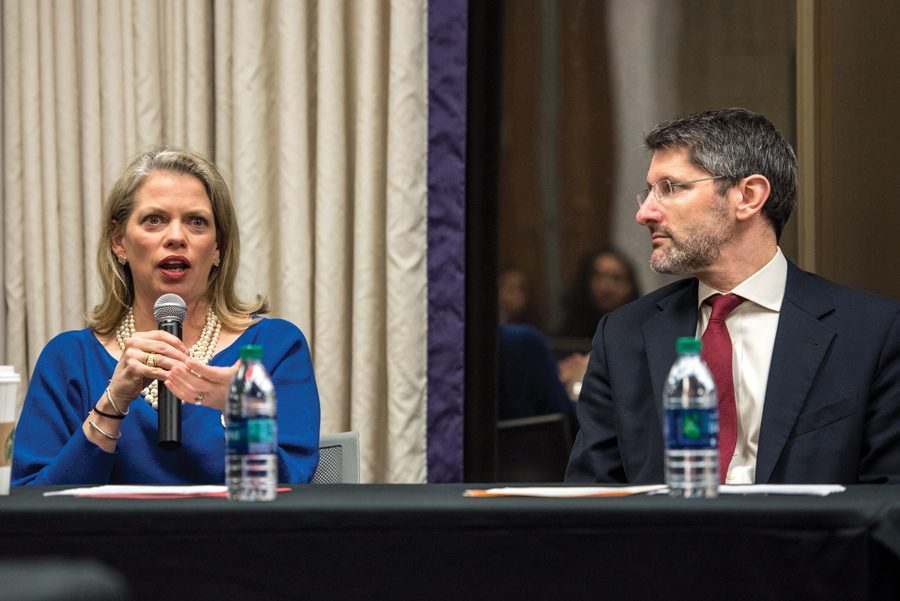 Julie Payne-Kirchmeier and Brad Zakarin speak during Wednesday’s ASG senate meeting. The two NU administrators were invited to participate in a Q&A about the future of Hobart House with concerned members of the NU community.

The continued existence of non-greek, all-women housing was thrown into jeopardy after NU announced plans to create a “universal residential experience” that would reconfigure on-campus housing. The 114-page report released in January 2018 by the Universal Residential Experience Committee made no explicit statement of an intention to maintain an all-women’s living space within the new model.

That ambiguity led sophomore Elynnor Sandefer, the Rainbow Alliance senator and a member of the Hobart House executive board, to write legislation demanding the University preserve a separate building for women-identifying students.

ASG Senate invited Dr. Julie Payne-Kirchmeier, the associate vice president and chief of staff for student affairs, and Brad Zakarin, the director of residential academic initiatives, to its Wednesday meeting to hold a Q&A with ASG Senators and concerned members of the NU community regarding the future of Hobart House.

Hobart House opened in 1928 as a non-greek housing option for women. Approximately 50 students live in the building each year.

“For nearly a century (Hobart House) has provided a safe and economically accessible space for women and women-aligned to live and learn alongside each other,” said Eleanor Ellis, the president of Hobart House. “It’s also provided greater freedom of movement for Hijabi students than they would find on a single gender floor, which is why we’ve really pushed for having a whole building.”

During the Q&A, students cited a large gap between a living space, which could be a single floor within a co-ed building, and a separate structure for women. Nicole Roberto (Weinberg ’18), a former Hobert House resident, said it’s important that the community remain in a separate building.

“Something I’ve learned is that alumni still identify with Hobart. This is a place with so much history and I think that the option of even having a women’s residential space that isn’t physically located in Hobart House is going to sever a lot of that history,” Roberto said. “This is a place that connects women over decades, and we really don’t want to lose that history.”

Payne-Kirchmeier added that nothing was off the table, including the long-term preservation of Hobart House. But, she said, the University would need to first conduct focus groups and surveys and solicit feedback from relevant stakeholders before releasing its final plan for all-women’s housing.

“If we do it right what we’ve done is we’ve created what Northwestern needs, not what you and I think it needs right now trying to project 10, 20 years in the future,” Payne-Kirchmeier said. “I think one of the things that we can probably do better together is have more conversations like this at different steps and stages along the way.”