Men’s Tennis: Wildcats pick up two wins on Sunday as they continue the climb back to .500 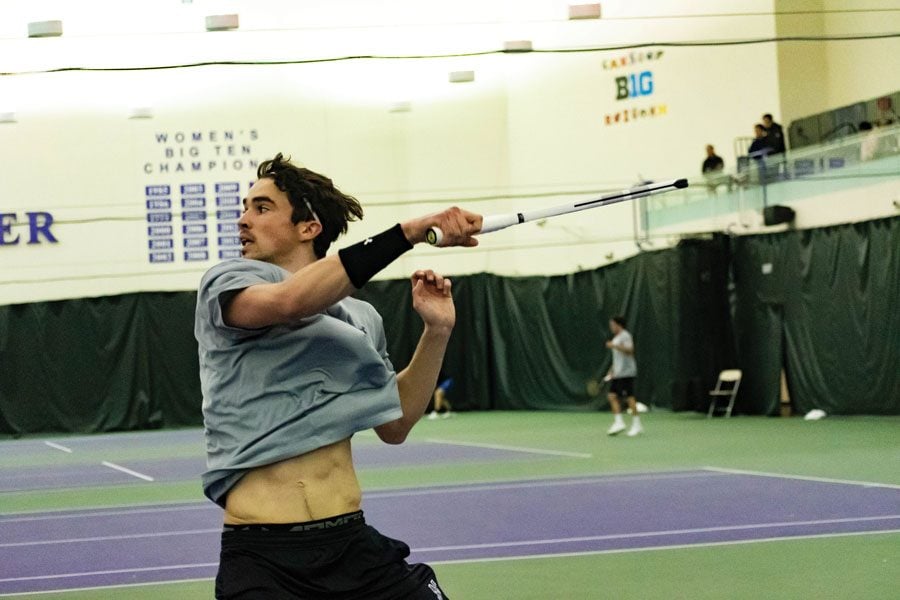 Nick Brookes follows through on a backhand. The sophomore won his doubles match over the weekend

Playing in Evanston for the first time in 2019, Northwestern looked right at home.

The Wildcats (3-4) defeated Duke (3-4) and Chicago State (0-3) on Sunday, extending their winning streak to three matches in the young season.

After struggling to start off the year with four straight losses, NU followed that stretch with three straight wins. Sophomore Nick Brookes said the team continues to believe in its ability, saying that staying the course through adversity can lead to more wins in the future.

In the first match on Sunday against the Blue Devils, the Cats won 4-3. For the second consecutive match, it won the doubles point thanks in part to the play of Brookes, who was paired with freshman Simen Bratholm. The two won their set 6-2 in what proved to be the match-deciding point for NU.

Brookes said he attributes this to the team’s recent success in doubles as a result of having the opportunity to continue to “gel” and become more experienced.

“I think we competed hard through the beginning of the season, we (just) came up unlucky a couple of times,” he said. “I think we had a belief in the fact that the results would come.”

After also sweeping the Cougars 4-0 in a separate match, those results have started to come for the Cats. Coach Arvid Swan said he sees this as a product of the team’s hard work in practice as well as playing the game confidently. Both of those components, he said, can help explain this turnaround.

In addition to NU continuing to believing in its abilities, Swan said he sees the younger players gaining important experience with the benefits of that beginning to show in a positive way.

“It’s so much different than anything they’ve experienced in competition before,” he said. “I think there’s just a greater comfort level with every match they play. I’m proud of the growth of the entire team and certainly the freshman class as well.”

Looking ahead, NU plays four matches in the next week. The first three will be at home against Oklahoma State, Harvard and Purdue. Sunday night, the Cats play at Chicago State to wrap up a busy week.

Heading into this intense stretch, Swan said his team needs to continue to play like they have played the past three matches.

“It’s really the same things — play a solid doubles point (and) win or lose come out put six singles matches out there where everybody’s competing as hard as we can,” he said. “We’re playing four good teams coming up … but you can’t look ahead or look behind we just got to kind of focus on each match and do the best we can.”

Brookes, while emphasizing those points as well, said that he’s just looking forward to playing.

“It’s going to be tougher, no easy matches for us coming up,” he said. “(I’m) just gonna try and enjoy it to fight for everything that I can and see what happens.”

Related Stories:
– Men’s Tennis: After losing to Alabama on Friday, Northwestern defeated Auburn on Sunday for its first win of the year