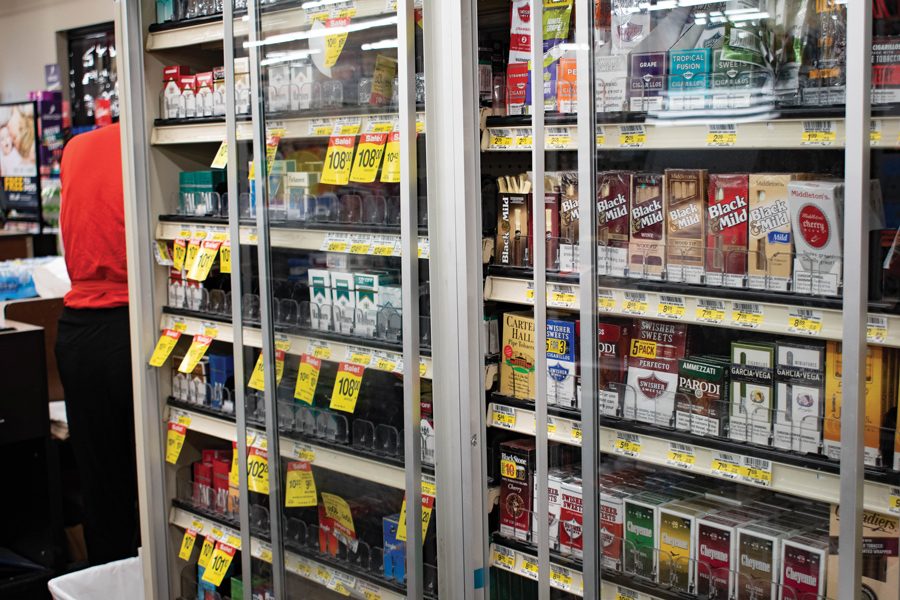 A store shelf filled with cigarettes. Illinois state legislators are revisiting the Tobacco 21 legislation, which would raise the minimum age to purchase tobacco products from 18 to 21

State policymakers are revisiting their attempts to pass statewide legislation to increase the minimum age to buy tobacco products from 18 to 21 years old.

Legislators have reintroduced the Tobacco 21 bill into the Illinois General Assembly, following Democratic Gov. J.B. Pritzker’s inauguration and Democratic control over both houses. The bill previously passed both the Illinois State House and Senate in 2018 before it was vetoed by former Republican Gov. Bruce Rauner. The state Senate successfully overrode this veto, but the state House was short the votes necessary to do the same.

More than 30 Illinois communities have taken matters into their own hands, adopting Tobacco 21 despite a lack of statewide enforcement. Evanston was the first to adopt the legislation in October 2014.

“The plasticity of the brain allows youth to be addicted faster and quicker to nicotine in tobacco products,” Thomas-Smith said. “We know the timing is critical.”

Thomas-Smith said there has been a decrease in youth use of e-cigarettes as well since Evanston enacted the age increase. Evanston also requires e-cigarette purchasers to be 21 or older.

Nationwide, however, there has been a surge in e-cigarette use in youths, with a 78 percent increase in high school students’ use from 2017 to 2018, the National Youth Tobacco Survey found.

Marcia Smith — a co-owner of Smokes & Such, which has four locations, one of which sits between Evanston and Skokie — said the Tobacco 21 legislation chooses an age inconsistent with the age that the government considers someone an adult.

“There’s nothing magical about the age of 21,” Smith said. “At 18, in this country, you’re told you’re an adult. You can join the military, which means risking your life. You can enter into a legal contract.”

Since Smokes & Such opened in 2009, Smith said she has always carded every customer to protect the integrity of the store.

But Smith estimated that her stores have lost about 30 percent of their retail business, most of which comes from decreased e-cigarette sales, since Evanston passed the Tobacco 21 legislation, she said.

Because of the decrease in sales, she said she doesn’t need as many employees because the stores are not as busy. She said government officials see this decrease as “saving” 30 percent more people from addiction without realizing the hurt it causes workers who lose jobs in the tobacco industry.

Rather than pursuing statewide legislation, Smith said public health education surrounding tobacco use needs to start at the neighborhood level. She added that Tobacco 21 will not stop teenagers from finding a way to get access to tobacco products.

The legislation also contradicts with what it means to live in a “free country,” Smith said.

“People need to be aware of government infringing on their personal freedoms, whatever that is,” she said. “Where does it end, where you can’t make choices about what you want to do in your life, with your body?”

Don Zeigler — the chair of the Evanston Health Advisory Council and a professor at Loyola University and the University of Illinois at Chicago — has worked on educating the public about tobacco use since 1970.

He said raising the age at which consumers are able to purchase tobacco products makes it harder for young people to access these products.

“We’re sure that we’re going to have fewer and fewer young people experimenting with tobacco products and not becoming addicted,” Zeigler said. “Hopefully, there’s a whole culture that doesn’t encourage or facilitate this or profit from it.”

JUUL, a popular e-cigarette company, has adopted the minimum age to purchase e-cigarettes online as 21 years old after critics said its advertising targeted young consumers. But the Illinois Chamber of Commerce has pushed back against the legislation, saying it hurts small businesses and “creates an underground market” for youth tobacco use.

Zeigler said “ingenious” advertising of these tobacco products profit off of targeting youth through social media. He added that the flavoring in e-cigarettes contributes to young adults having the perception that vaping is safe and “sort of sexy.” Zeigler said he hopes Illinois legislators will outlaw these flavorings in the future to decrease e-cigarette use.

Thomas-Smith said she is “hopeful and positive” about the state legislature’s attempt to pass Tobacco 21 throughout Illinois.

“I’m really quite optimistic,” Zeigler said. “I don’t think we’re going to have a problem getting this through the state legislature.”