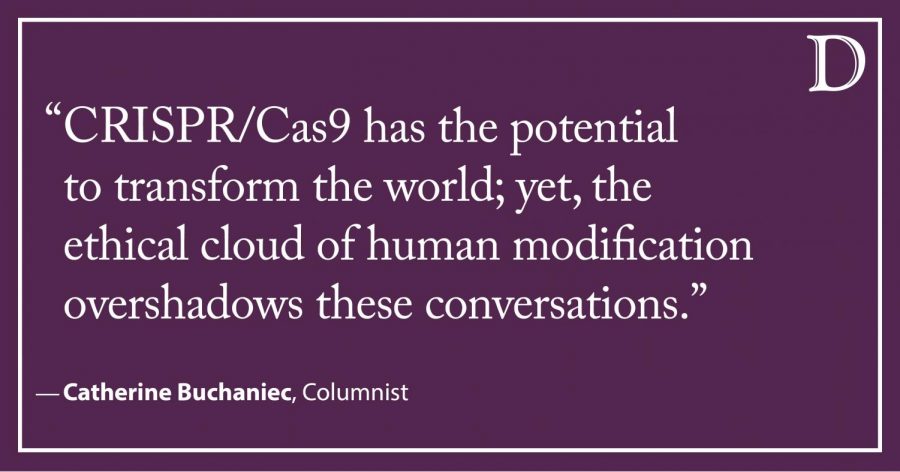 Since its public release a few decades ago, the internet has largely been viewed as the most revolutionary product of the past century. However, another innovation is starting to provide some competition — CRISPR/Cas9.

Starting in the 1990s, scientific researchers discovered that certain types of bacteria and microbes have the ability to edit their own DNA in order to safeguard themselves from attacks. Then, in 2013, researchers at MIT harnessed CRISPR/Cas9 — a family of DNA sequences found in such prokaryotic cells — to edit the eukaryotic cells that make up us humans, along with most plants and animals.

The magnitude of this discovery is unparalleled; yet, to the general public, this gene editing technology was largely unheard of until last fall.

Since 2013, CRISPR/Cas9 sequences have lurked in the background of the public awareness, avoiding the inevitable debate: Is it ethical to edit human embryos, and if so, where do we draw the line?

This is a debate that will shape the future. However, in November 2018, a Chinese scientist fast-tracked this discussion when he used this gene editing technique to to create the world’s first gene-edited human babies. His methodology was considered reckless and controversial by the international scientific community.

Around the globe, this innovation has stomped its way into one of the most heated ethical debates ever to enter the scientific community. This is in part because of connections to science fiction, like the movie “Gattaca,” which deals with the practice of gene selection. CRISPR/Cas9 has the potential to bring to life the “Gattaca” dilemma of superbabies — the ability to pick and choose which genes your children would have in order to prevent genetic diseases or even decide features like eye color.

While this ethical debate needs to be had, now more than ever, I am afraid of the backlash from this event and the inevitable ethics conversation. CRISPR/Cas9 has the potential to transform the world in ways independent of the alteration of human genes; yet, the ethical cloud of human modification overshadows these conversations.

In short, there is more to CRISPR/Cas9 than superbabies and “Gattacta.”

This technology is not limited to the human species; it can be used on all eukaryotic cells. But if scientists solely use CRISPR/Cas9 on human genetic engineering and misuse it while doing so, it could leave a stain on the entire concept, ruining the endless possible advancements CRISPR/Cas9 could bring about.

For instance, this weekend I attended a panel on climate change at the Shedd Aquarium where one researcher spoke on how gene editing could be used to protect coral reefs from further damage and even rebuild those that have been lost due to climate change. These reefs play a vital role in protecting coastlines from tropical storms and are a source of economic revenue, food and resources for millions of people around the globe.

Due to rising ocean temperatures, coral reefs are globally going through a process called “bleaching” that makes them more prone to starvation. CRISPR/Cas9 has the ability to help — to save coral reefs and the habitat they provide for so many species — by removing the gene that makes corals go through the “bleaching” process. That gene could be replaced with one that makes corals more resilient to warm water temperatures.

Furthermore, this same technological advancement could lead to the eradication of malaria, saving hundreds of thousands of lives each year by removing the gene from mosquitos that makes them susceptible to the malaria disease. If mosquitos can’t carry malaria, they in turn cannot pass it on to humans.

CRISPR/Cas9 has the potential be a major tool in fixing the effects of climate change, preventing malaria and countless other problems the world currently faces. Therefore, while scientists engage in the inevitable ethical debate regarding the role of CRISPR/Cas9 in society, remember that embryo modification is only one chapter of the story, not the entire book. We need to separate the concerns over human genetic modification from the potentials of the technology as a whole.