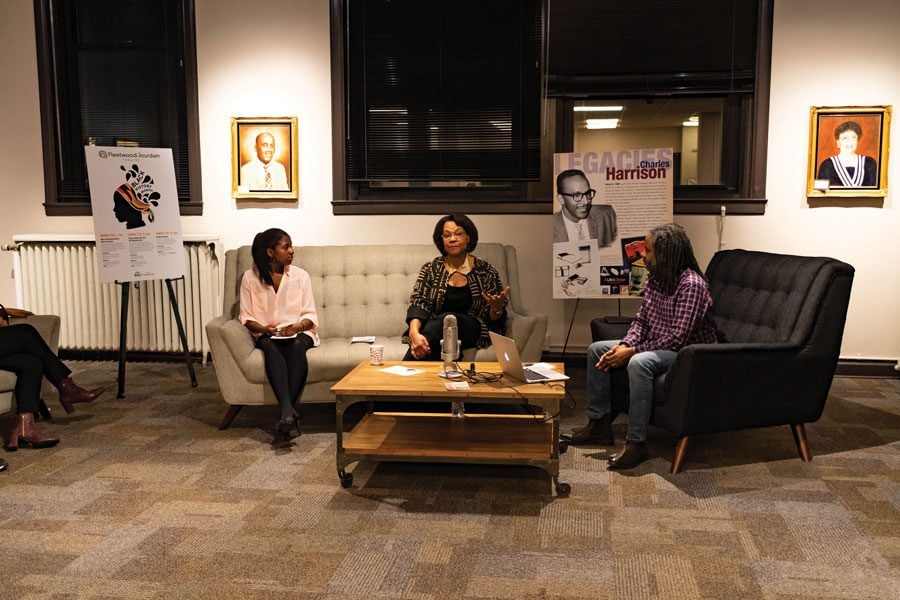 Dino Robinson moderates a discussion with Chloe Smith and Gloria Bond Clunie. Clunie reassured Smith that she belongs in the honors classes she is enrolled in at ETHS.

At the second annual Black Evanstonian History Makers Up Close event, Chloe Smith, a junior at Evanston Township High School and Gloria Bond Clunie, an award-winning playwright and the founder of the Fleetwood-Jourdain Art Guild Gallery, explored the challenges they face as women of color in predominantly white environments.

“In a classroom setting like that every day, I don’t feel like I belong there,” Smith said, tearing up. “It just gets discouraging at times.”

More than 30 people attended the round table discussion hosted Monday evening in the Fleetwood-Jourdain Art Guild Gallery in the Lorraine H. Morton Civic Center. This is the first of a series of events the city of Evanston will host to honor Black History Month.

Dino Robinson, the production coordinator at Northwestern University Press, moderated the event. He described the two guests as “history makers” and “legacy keepers,” and asked them to share their activities, accomplishments, role models and hopes for the future and their legacies.

Tim Rhoze, the artistic director of the Fleetwood-Jourdain Theatre, said the event was meant to highlight people of color who are changing Evanston for the better. Smith directs a children’s choir and helps out at a daycare, while also talking at events like Women Speak in Evanston — a national movement fostering discussions of gender, identity and social justice. Clunie has published plays like “North Star” about African-American experiences and won the 2011 Medallion Award from the Children’s Theatre Foundation of America. She also teaches a Sunday school class at her church.

“(The purpose was) to show living history—those who are doing things positively in this community, people of color,” Rhoze said. “Community sharing is what the Fleetwood-Jourdain Theatre is all about.”

Smith, an honor student at ETHS, discussed the challenges of being one of the few students of color in her honors and AP classes. She said students of color are not encouraged to take advanced classes, and that she often worries she will be laughed at if she makes a mistake in her AP classes.

“My ideal class is an AP class course with all black students in the class and a black teacher,” Smith said. “People of color in a classroom so no one feels as if they don’t belong. Just seeing people who look like you is enough.”

Clunie, who studied theater at Northwestern, said she did not think that Smith’s generation would have the same experiences as she did. Clunie integrated her elementary school, and she said she was one of five black students in the theater program during her time at NU. Her experience in college left her with her mixed feelings, she said.

Smith also shared that working with children as a choir director fills her with joy and brings her closer to God. Clunie said people like Smith give her hope for the future.

Still, Clunie reminded the audience that previous gains by black politicians had been taken away, and that they must be vigilant in order to stay “in the room where it happens.” She said students should claim the spaces they exist in today.