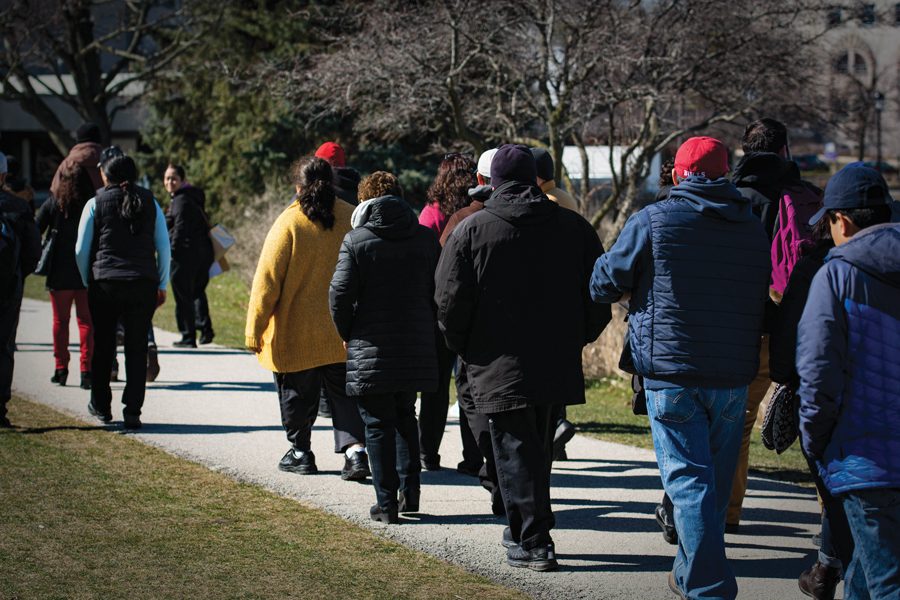 Northwestern’s Sodexo and Aramark employees march in April to present a petition asking the companies to help with the transition to Compass Group North America. A petition calling for Compass Group to improve treatment of service workers has received over 2,000 signatures since it was posted at the end of January.

Students Organizing for Labor Rights, a coalition that works to build student-labor solidarity, is circulating a petition demanding an end to the mistreatment of workers, which has received over 2,000 signatures since it was posted at the end of January. The petition includes calls for managers to not pressure employees to work excessive overtime and to treat employees with respect. It also calls on Compass to take employee complaints seriously and hold managers accountable for “verbal abuse and racist harassment.”

The petition said the conditions of workers are in conflict with the University’s “rhetorics of treating workers as family.”

SOLR previously worked with UNITE HERE Local 1, a union representing NU service workers, to establish a contract that would ensure workers’ pay, positions and job stability were not compromised during the transition to Compass. Despite these assurances last year, the group said, Compass has continued to act without proper regard for employee well-being.

“Many months later, we can now firmly assert that the presence of Compass on Northwestern’s campus has led to labor abuses, intense anxiety and a complete disregard for the humanity of Northwestern’s service workers,” the group wrote in the petition.

SOLR member and Weinberg junior Sharmain Siddiqui said the group has kept in regular contact with workers since the summer, when Compass officially transitioned into its role as NU’s primary food service provider.

However, many employees did not wish to speak out against Compass, potentially for fear of retaliation, SOLR member Allyson Bondy said. One of the petition’s demands calls for media transparency, as Compass has taken issue with employees participating in interviews in the past, the Weinberg junior added.

Since last quarter, SOLR has been meeting with University administrators and Compass representatives about the issues workers raised. The group chose to release the petition and garner student support when meetings led to no resolutions, Bondy said.

“We’ve had closed-door meetings with Compass and (vice president of Student Affairs) Patricia Telles-Irvin, but no material of change has come out of that,” Bondy said. “We need it to escalate further so that the company and school feel more pressure to address the issue.”

Siddiqui said NU tends to exclude service workers when propagating the narrative of community on campus, and students — as members of NU — have a responsibility to be invested.

“We pay a lot of money to go here and that means we as students have a lot of power that we can leverage against the University,” the Weinberg junior said. “That puts us in a very unique position of privilege and gives us a platform, and by virtue of that, it means we have a responsibility to help and do better.”

SOLR member Seri Lee said working with University employees through SOLR has been one of their favorite parts of being at Northwestern.

“Some of the best, warmest, most amazing, inspiring, thoughtful friends I’ve made on this campus are workers,” the Weinberg junior said. “I think too many students here exist in a bubble, and it’s important that we expand our notions of community to include workers as an essential part of our community.”