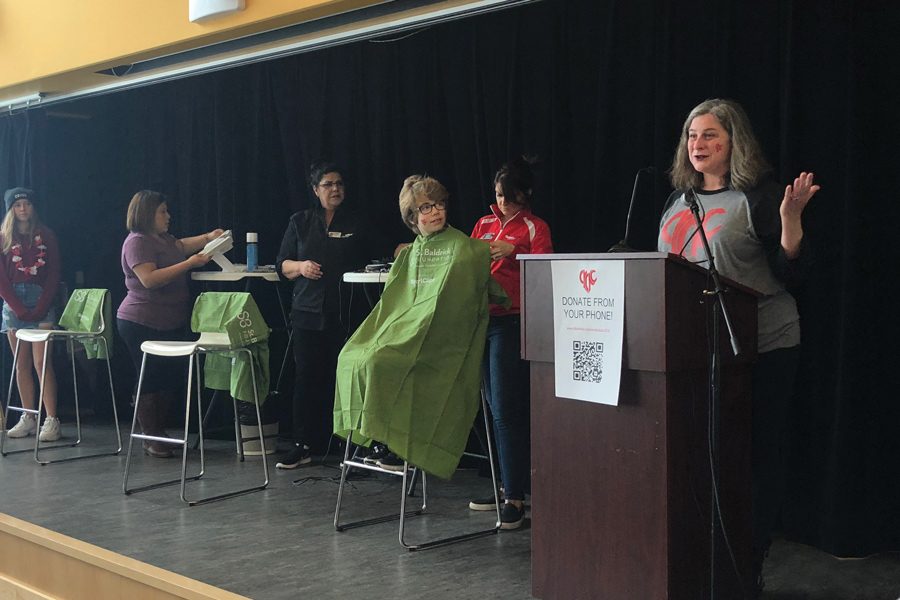 Joshua Rein prepares to shave his head at his cancer fundraiser. Chiaravalle Montessori School hosted the event in partnership with St. Baldrick’s Foundation to raise money for children’s cancer research.

Every year, Joshua Rein shaves his head for children with cancer. He initiated an annual fundraiser at his elementary school, Chiaravalle Montessori School, to raise money for the St. Baldrick’s Foundation.

Chiaravalle hosted its third annual fundraiser on Sunday, where students shaved their heads, donated hair and volunteered to raise money. The school partnered with St. Baldrick’s, which works with pediatric oncologists to help fund research for children’s cancer.

In 2016, Joshua Rein watched his father, Allen Rein, offer to shave his head on the spot for children’s cancer at another event for St. Baldrick’s. Their family friend Sarah Zematis managed to raise $400 in two minutes with Allen Rein’s help.

“It was so last minute and on the fly, I didn’t have time to get nervous, I didn’t have time to wonder what it would be like,” the elder Rein said. “It’s a wonderful feeling to feel like you are doing something so tangible for such an amazing cause… There’s something about a set of clippers going to your head that is just different and inspiring and moving”

Joshua Rein said he thought the event was so “awesome” that he was inspired to bring it to his elementary school, Chiaravalle. The private school took over the St. Baldrick’s fundraising event in 2017.

Zematis said this year’s event was a “spectacular success” and everyone came together to support kids who are struggling with a cancer diagnosis. Zematis’ daughter was diagnosed with an inoperable brain tumor when she was two years old in 2015.

“So much of this journey is so dark and so heavy and feels very lonely,” Zematis said. “Our community has not only continued to support us, but their support is expansive. On those dark days it makes me know that we are never alone and we will always have people.”

Chiaravalle raised $49,000 at its first event in 2017, increasing it to over $65,000 by the second year. On Sunday, it raised $56,000 and expect more donations as kids show off their freshly shaved heads at school on Monday. Zematis said that the most important part is “kids helping kids,” because the next generation will care for one another.

Although Joshua Rein will be graduating from Chiavalle next year, he said hopes he will be able to participate in something similar at Evanston Township High School.

“It really is mostly about the kids,” Allen Rein said. “Joshua is kind of leading the charge but even the whole subcommittee that was in charge of all the sponsor donations is mostly kids.…The kids who participate in the event or are shave-ees get all fired up — they’ve been talking about it for weeks.”

Allison Maguire said there is a core group of volunteers including Rein and his wife who help organize the event each year. Maguire volunteered to write press releases, help initiate a new fundraising app and also shaved her head on Sunday.

Maguire said that it is a community effort putting the event together and that Zematis hopes it will include the broader Evanston community next year.

“(The event could) involve other schools who can have their own teams and raise funds,” Maguire said. “I think it could be huge. If you think about what we’ve raised in just this community, every year we’ve raised over $50,000. Imagine if we could broaden it to the whole Evanston community.”

Correction: A previous version of this story mischaracterized Chiaravalle Montessori School. It is a private school. The Daily regrets the error.