The Spectrum: Saying Asians aren’t people of color is oppression in itself 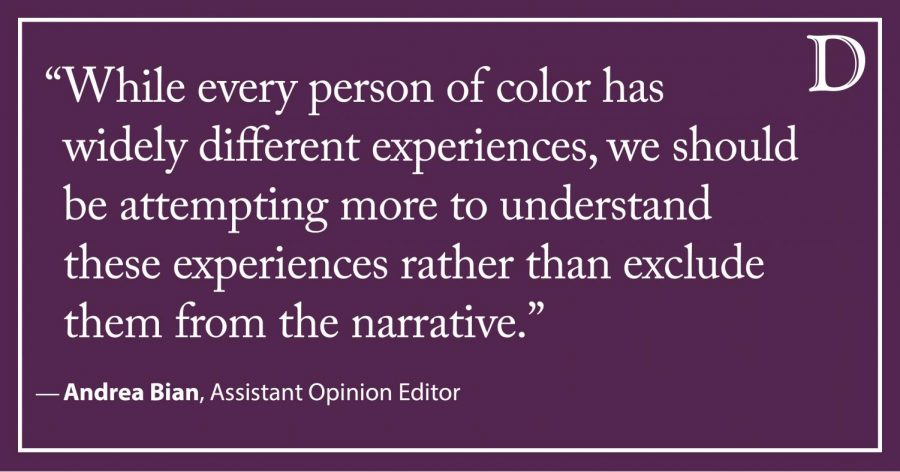 Identifying not only as Asian-American but as a person of color felt empowering. The term acknowledged my humanity first and my ethnicity second. Saying I was a person of color, I thought, allowed me to connect with others who identified similarly, no matter how distant our ethnicities were.

That’s why I was so appalled to see tweets that implied otherwise.

“Asians are NOT people of color and never were. Don’t even try it,” tweeted @Nj_GRIZZ.

I remember after reading those tweets having to physically set my phone down because I was so hurt. I was also confused. If I’m not a person of color, what am I? I’m certainly not white. I felt as if my identity was being dismissed — erased into nothingness.

It may seem trivial to be so affected by a simple label, but “person of color” had given me the ability to share in similar experiences with other minorities. Events at Northwestern held for people of color made me feel like minorities could support each other in each of their individual struggles.

When I say individual struggles, I acknowledge that different minorities deal with starkly different injustices. I know that in some ways, Asians are much more privileged than other minorities, and I also know it’s important to use that privilege to support those minorities in their respective struggles.

Being excluded from the “person of color” narrative contributes to the whitening of Asians as a “model minority.” I often see the argument that because Asians are the ethnic group with the highest median income in the United States, they are not subject to discrimination or injustice.

Yet even this increased representation brings situations that display racism toward Asian-Americans. The aforementioned Kelly Marie Tran, who @VibeHi mocked for calling herself a person of color, received such harsh social harassment after her “Star Wars” role that she deleted social media.

While every person of color has widely different experiences, we should be attempting more to understand these experiences rather than exclude them from the narrative. I would love to focus on using my perspective to support other people of color whose lives may be very different from mine. I think people of color all have a similar end goal — to belong. To not feel excluded from the majority. With this similar goal in mind, we can bring each other up rather than tear each other down.

Andrea Bian is a Medill first-year. She can be contacted at [email protected] If you would like to respond publicly to this op-ed, send a Letter to the Editor to [email protected] The views expressed in this piece do not necessarily reflect the views of all staff members of The Daily Northwestern.