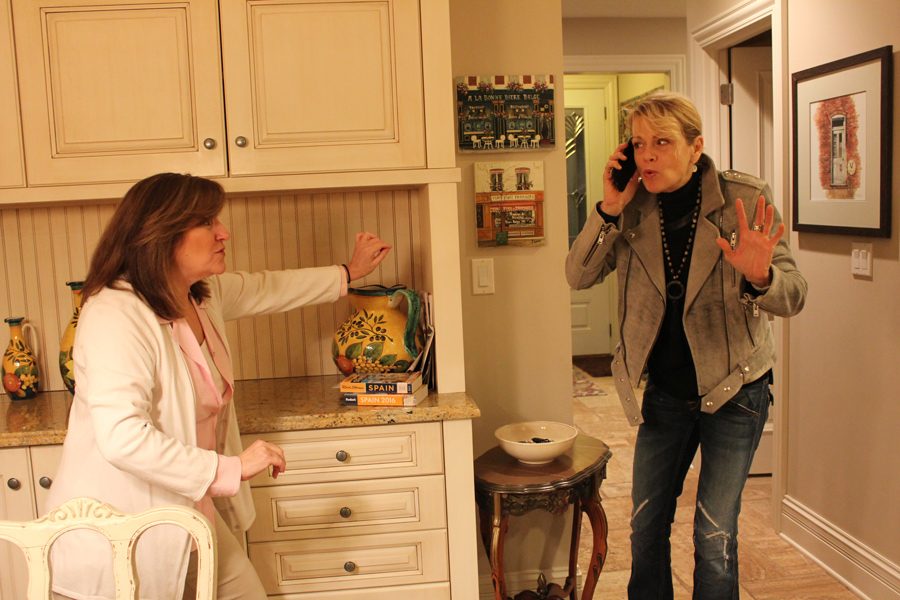 “The Roommate” follows mothers Sharon (left) and Robyn (right) who teach each other life lessons. The play is directed by Northwestern alumna Beth Wolf, premiering at the Citadel Theatre on Feb. 1.

As a mother and grandmother, lead actress Ellen Phelps was drawn to Jen Silverman’s play “The Roommate” because she likes the idea that a person can change their life no matter what age.

“My character really felt like she was finished with her life,” Phelps said. “Now, it feels like it’s almost beginning.”

Phelps plays Sharon in “The Roommate,” which opens Friday and runs through March 3 at Citadel Theatre in Lake Forest, Illinois. Directed by Northwestern alumna Beth Wolf (Communication ’03), the dark comedy follows Sharon, a sheltered, divorced mother, and Robyn, a New Yorker looking to escape her past. When Robyn moves into Sharon’s Iowa home, both women discover they can still pursue an exciting life.

Laurie Carter Rose portrays Robyn opposite Phelps. Rose said Robyn’s character is a step outside of the warm, friendly characters she typically plays.

“Robyn is darker and edgier than characters I’ve played in comedies,” Rose said. “The characters I play are more predictable and buoyant and warm, and she has a coldness to her.”

Rose said she enjoyed playing a “closed-book” character like Robyn and that she liked the darkly comedic tone of the play overall.

Rose and Phelps comprise the entire cast of “The Roommate,” and Rose said this is her first time acting in such a small ensemble. The actresses are on stage for almost the entire 90-minute run of the play.

“It’s a little intimidating, but we depend on each other so much and I feel so safe with Ellen on stage,” Rose said. “It’s kind of a marathon.”

Despite the stamina it takes to be one of two actors in a play, Rose said she was excited to be part of an all-women cast, which was further amplified by the female-driven rehearsal space.

Rose said she felt comfortable during the all-women rehearsals, which consisted of herself, Phelps, Wolf and the stage manager.

“I’m surrounded by this female energy that really has a way of lifting you up,” said Rose. “It’s a very nurturing environment.”

In staging the play, Wolf said she was eager to direct a “beautifully-written” play with two female leads. She said she has directed a two-person cast before, but having two women as leads introduced a different dynamic.

At Northwestern, Wolf studied theater and was initially determined to become an actress. However, Wolf acknowledged that her best theatrical experience during college wasn’t onstage — it was directing a production of “A Midsummer Night’s Dream.” She said she distinctly remembers directing the play inside a tent on the Norris East Lawn in the middle of November.

Although Wolf continued to pursue acting after college, she turned more toward directing in her late 20s and directed several productions. At some point, she said, a lightbulb went off that directing was a better fit for her.

“The Roommate” is Wolf’s first production at the Citadel Theatre. She said it is rare to find a script that profiles two women in their 50s without making it about men in their lives, and that she’s excited to share the show’s themes of reinvention with audiences of all ages.

“Women get these labels at a certain time in their life, but labels aren’t important,” said Phelps. “It’s really about what you do with your life at whatever age you are.”