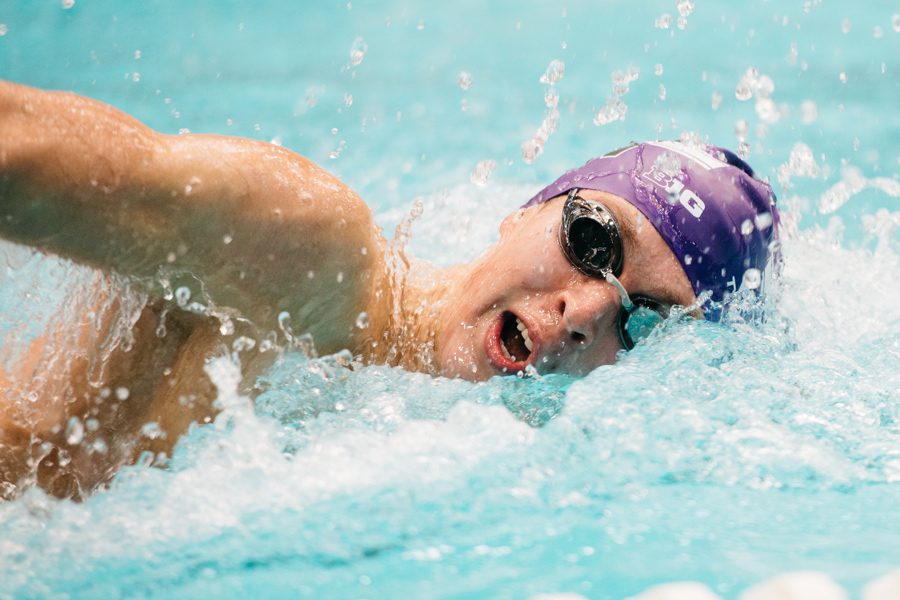 A Northwestern swimmer does freestyle. It will be Senior Day for the Wildcats in a Big Ten dual this weekend.

Coming off a victory on Saturday in Cincinnati, Northwestern will be at home for its final meet of the regular season, hosting Minnesota and Purdue on Friday and Saturday in a two-day tri-dual.

Two Cats were recognized for their performance last weekend. Miriam Guevara earned three first-place finishes in two meets against Louisville and Cincinnati and was named Big Ten Freshman of the Week. Sophomore Calypso Sheridan, who had a total of six individual wins against the Cardinals and Bearcats, earned Big Ten Swimmer of the Week honors.

Northwestern’s men have lost 10 straight meets against Purdue since last beating the Boilermakers in November 2006. The Cats’ last dual meet win against a Big Ten school came in January 2014 against Iowa. The NU men have also lost to Minnesota (4-2, 1-1) in each of the last three seasons.

The women have not fared much better, having dropped duals to both teams for the last three years. Coach Jeremy Kipp, however, said the Cats, being at home and against Big Ten foes, will come into the meet with plenty of energy.

“It’s one thing to go on a bus trip down to Louisville, five hours, against a nonconference (team),” Kipp said. “You kind of have to will yourself to get up and get ready. It’s a lot easier to get ready for Big Ten competition.”

The men have benefited from the presence of freshman divers Evan Labuda and Yohan Eskrick-Parkinson to complement senior Ben Magliato. Magliato was the only diver on the team last year, and the Cats struggled to pick up points in the diving events. On Saturday, NU finished 1-2-3 in both diving events to help secure the victory.

Kipp said his goal is for the women to come in first in half the events, while the men will be motivated by the chance to get their first conference win in five years.

“It would be successful if we win both, but if you looked at last year’s results, that’s a tall order,” Kipp said. “The men feel like this is a chance to get that monkey off the back.”

The Cats will honor their 14 seniors this weekend — eight men, six women — for their accomplishments during their time with the NU program. The team will then have a few weeks off before the Big Ten Championships.

The most accomplished seniors on the men’s side are Tyler Lis and Will Hofstadter, who swam the fastest times on the team last season in three events each. This weekend will also be the last meet in the Norris Aquatics Center for Olivia Rosendahl, a two-time defending national champion in the platform diving.

“Senior Day is kind of emotional and it can be tough on the seniors because a lot of these men and women have been swimming since they were 8, 9 years old,” Kipp said. “For me, it’s a little bittersweet because I just feel like I’m getting to know the seniors now. I’ve watched them grow a lot this season. … I’m really proud of them. It was a rough year, a lot of transition, and they really handled it as well as anyone could handle it.”