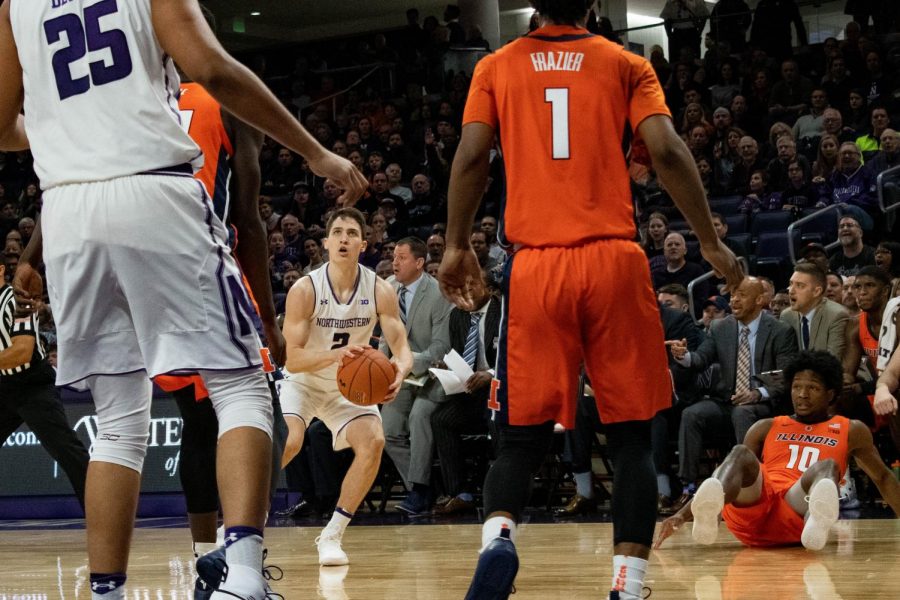 For Bruno Fernando, getting to the basket was an easy and beautiful endeavor on Tuesday night. And then there was Northwestern’s offense, lacking a player who could consistently get to the rim, or create separation or even hit an open shot.

Maryland’s (17-5, 7-3 Big Ten) center scored a game-high 22 points while forming a wall around the paint, and the Wildcats struggled getting around him or shooting over him. The result was a second consecutive offensive disaster and a conference loss for NU (12-9, 3-7), who fell 70-52 against the Terrapins.

1. Bruno’s World. Fernando tested the waters for the NBA Draft last spring and would have been a fringe first round pick had he kept his name in the field. Instead, he returned to College Park to feast on unprepared foes like NU, and he hung a series of jump hooks and emphatic dunks on senior center Dererk Pardon and the Cats’ front line.

What Ethan Happ did for Wisconsin on Saturday, Fernando basically matched. While Maryland’s big didn’t finish with a triple double, his shot creation and energetic defense distinguished Fernando as the best player on the floor. For the second straight game, a dominant big picked NU appart.

2. Ice cold shooting. Against Wisconsin on Saturday, the Cats scored 24 points in the first half and 22 in the second. Then, perhaps for consistency’s sake, NU had 22 in the first 20 minutes against Maryland, missing 24 of 31 shots and 11 of 13 from beyond the arc. The Cats missed its first five three point attempts and didn’t significantly improve from there, continuing a trend of inefficient offense in Big Ten play.

In the second half, the team added just 30 points.

The continued struggle for Law to find his rhythm was apparent again, as the senior forward scored 5 points of 25 percent shooting. Against Fernando, Pardon was stonewalled in the post and shot fruitless post attempts against one of the best defending bigs in the country, finishing with 14 points.

3. The struggles continue. Among all power conference players who shoot 7 or more threes per game, graduate guard Ryan Taylor has the second worst three-point shooting percentage in the country. Law is shooting 19 percent since he missed the Michigan game. Freshman guard Miller Kopp, who was projected to be an offensive sparkplug in the preseason, has made one field goal in his last three games and played just 15 minutes tonights. Freshman forward Pete Nance is out indefinitely.

The team will be returning to Evanston late Tuesday night despite the frigid temperatures, according to an athletic department spokesperson. When the Cats touch down they’ll have six days to try to pinpoint what’s wrong before tipping off against Penn State at home Monday night.