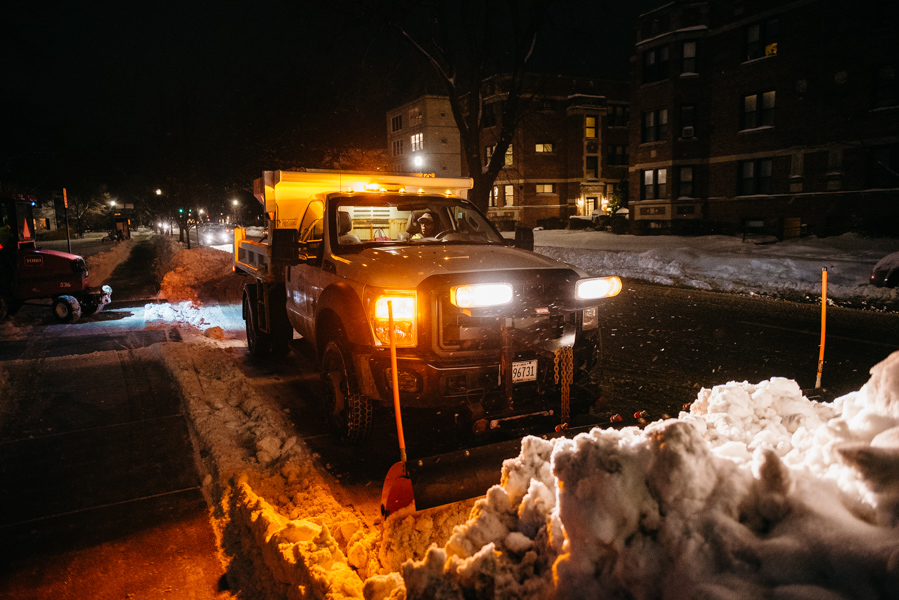 A snow plow clears snow from Ridge Avenue. City officials are preparing for the sub-zero temperatures coming on Tuesday

Evanston officials are working to provide extra city services like street clearing and childcare in case of school closures as forecasts predict sub-zero temperatures in the city on Tuesday.

City manager Wally Bobkiewicz said the city’s first priority is clearing snow from sidewalks and streets, as almost 6 inches of snow fell on Sunday and Monday. A snow parking restriction ban began on Monday and will continue through Tuesday. In order to keep city employees safe and inside, Bobkiewicz said they condensed a three-day snow-clearing operation to two days over Monday and Tuesday.

In addition, Bobkiewicz said the city will prepare for snow-related emergencies by keeping an eye on the main water source and making sure the fire and police departments are ready to respond if necessary. He added that the Evanston Fire Department put out a fire on Sunday night, but fighting fires in sub-zero temperatures is “very dangerous.”

On Monday morning, the EFD also tweeted tips for staying warm, advising Evanston residents to watch out for frozen pipes, take care of their pets and wear layers and a hat. The department also provided tips to take care of heating systems.

“We are the service provider of last resort in these things and we take that responsibility seriously,” Bobkiewicz said. “Any Evanston resident that has a need to be filled over the next couple of days, we’re going to do our best to accommodate them.”

At a Monday city council meeting, Mayor Steve Hagerty thanked the public works department for all the hard work it had dedicated over the past couple days in keeping the streets clear.

“I also want to caution everybody on the harsh weather that is coming our way,” Hagerty said. “We are talking historical lows in this area.”

At an Evanston/Skokie School District 65 board meeting on Monday, Superintendent Paul Goren said the district would remain open on Tuesday. However, he is keeping “a close eye” on the weather on Wednesday and Thursday, and he said he would release his decision about school for the rest of the week on Tuesday morning.

Goren said he and his staff will weigh the temperature, snow accumulation, driving conditions and heating in school buildings in his decision.

“Our primary goal is to keep school open,” Goren said. “We hear from many parents and caregivers around Evanston and Skokie about the importance of keeping school open.”

Goren also thanked maintenance staff in District 65, who were called to prepare school buildings for the cold.

Bobkiewicz said Evanston will support District 65 and Evanston Township High School/District 202 in their decisions about closing school. The city will make plans to open some facilities for children if parents need to drop them off during the workday, he said.

Evanston is familiar with the dangers that occur in low temperatures, Bobkiewicz said, so the city will do its best to be proactive. He said he will send out an official plan on Tuesday, but emergency services will continue regardless.

“I think people are going to stay home and sit tight for 24 or 48 hours, which is probably the smartest thing anyone can do,” Bobkiewicz said. “Hopefully by Thursday evening we’re on the other side of this.”