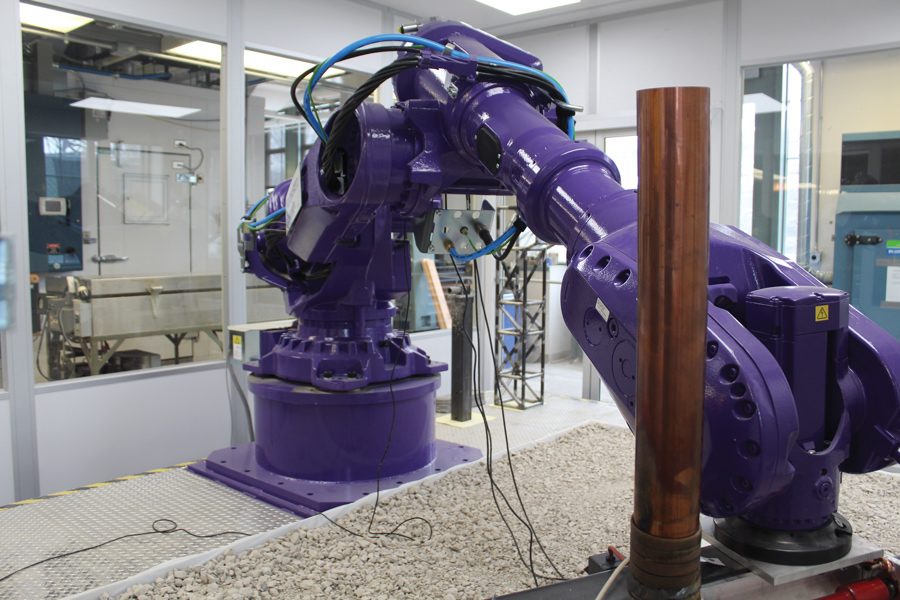 The 3D printer used by the Martian 3Design team to create the model of the Mars habitat. The team placed fifth in the first round of the NASA challenge.

As NASA prepares to send its first batch of astronauts to Mars, it issued a challenge to the public: find a way to build a livable habitat on the red planet. There was a caveat — the facility needs to be autonomously 3D-printable and made from materials found on Mars.

This challenge, announced in 2015, has three phases. The first two focused on the concept of the facility and the third focused on the finished virtual design and the partial construction of the habitat.

Northwestern joined the challenge at the beginning of the third phase and placed fifth out of 18 teams in the first round, winning a cash prize of over $17,000 and becoming the highest-ranking university in the competition.

Matthew Troemner, a second-year civil engineering graduate student, led the project with McCormick Prof. Gianluca Cusatis. To work on the habitat, Troemner and Cusatis led the Martian 3Design Team, which Troemner said is made up of undergraduate and graduate students across disciplines, ranging from civil engineers to political science majors.

Shaped as a dome, the habitat proposed by the NU team was designed to be both resilient and efficient, Troemner said. He added that if all the required materials were readily available to the printer, it would only take 15 days for a facility to be completed.

Jonathan Meehan, a McCormick junior and the virtual design team leader, said he joined the team in January 2018 and worked to create a realistic model of the interior of the habitat. He said when he first started, he worked on the model two to three times a week. During the summer, Meehan added, he worked on building the model every day.

“Once winter break hit, we knew we had a lot to get done,” Meehan said. “We had a good framework of what we needed, but we didn’t have the video completed. I was probably working five to six hours a day over break.”

The Martian 3Design team was up against companies dedicated to 3D printing, architecture and engineering, said Hokyin Kong, a member of the virtual design team.

“All the other teams are real companies and super serious,” the McCormick junior said. “We were kind of like the underdogs.”

Troemner said unlike the rest of the top five competitors, he was the only full-time worker on the project. The rest of the team still had to attend classes and work on this project in their spare time.

The Northwestern team did have one trick up its sleeve, though.

Prior to entering this competition, Cusatis and Lin Wan (McCormick MS ‘15) pioneered the creation of a material called Martian Concrete, or “Marscrete” for short.

Made from a combination of sulfur and a Martian soil simulant — or soil found on Earth that has similar properties to its Martian counterpart — this new type of concrete was much stronger than regular water-based cement and could dry in minutes instead of hours. The NU team utilized the Marscrete in their final design.

Cusatis said that the progress of the project is mostly because of the dedication of the students on the team.

“Everything that was achieved was because of the students,” Cusatis said. “Most of the time it’s volunteer work so I think it’s amazing where we are now compared to where we started.”

The final stage of this challenge begins April 28, where NU will have to create a one-third sized model of their habit to compete for a top-three spot to split a $1,000,000 prize.