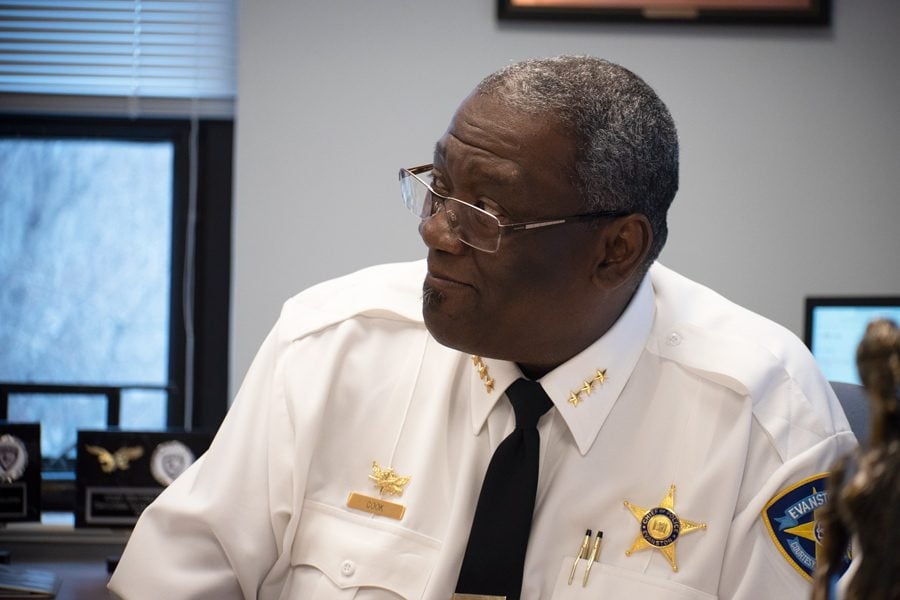 At his swearing-in ceremony earlier this month, Evanston’s new police chief Demitrous Cook chose his mother to pin his badge on his uniform.

“Mom, can I have my badge?” Cook candidly asked his teary-eyed mother.

Cook was sworn in as the Evanston Police Department’s police chief on Jan. 2 at the Lorraine H. Morton Civic Center. Cook replaces Richard Eddington, who announced his retirement in October 2018 after serving 12 years as EPD chief. Cook said as chief, he wants to focus on improving the relationship between police officers and the community.

Cook said his mother is “glued to the news.” When she hears about police misconduct across the country, she almost always picks up the phone and calls her son.

“She says, ‘You better not be doing that,’” Cook said. “She has always had high expectations for me … to do what’s right. If it’s wrong, she expects me to make a change.”

Cook said although EPD has maintained a positive relationship with the Evanston community, police misconduct nationwide has impacted the public’s perception of the police force.

In 2015, former Northwestern graduate student Lawrence Crosby was wrongly arrested by four EPD officers. Crosby settled his lawsuit with the city this month, but the case brought tension between black residents and police to the surface in Evanston.

“I’m always open to saying … we could have done something better,” Cook said. “Learn from it, train from it and move forward.”

He said the department still hesitates when deciding the correct use of force when policing.

The new police chief has 37 years of law enforcement experience under his belt. Over the course of his career, Cook said he has seen the most significant policing changes in technology.

“When I first started … all we had in the car was a knob to turn on the light and a shotgun,” Cook said. “We’re still transitioning to adapt some of that technology.”

Cook started as a police supervisor for the Northwestern University Police Department and later spent 26 years working in the EPD. Cook then served as the deputy chief of police in Glenwood, Illinois, where he had been working since 2010.

EPD Cmdr. Ryan Glew worked with Cook when the new chief first served as a sergeant for the EPD.

“You can’t undervalue Chief Cook’s connection and credibility within the community,” Glew said. “That one-on-one connection is something he has had his entire career. He was a police officer that was … not afraid to talk to people, someone who wasn’t afraid to walk around the neighborhood.”

Cook is in his third week on the job. The first 90 days are a transition period for any new police chief, Glew said. So far, much of his work involves meeting with community members and command staff to establish his vision and expectations, Glew added.

“He had a long, distinguished career,” Bobkiewicz said. “We’re fortunate he was interested in coming back because he was certainly the most qualified candidate.”

Bobkiewicz said Cook’s “fresh eyes,” combined with his prior experience within the EPD and in Glenwood, will enhance an already successful department.

“The department was in good shape with Chief Eddington’s departure,” said Bobkiewicz. “He wants to support the things going on right now.”

Cook also plans to continue Eddington’s effort to diversify officers in the department. He said he wants the police force to continue to reflect Evanston’s racial and ethnic diversity. In particular, he is looking to hire more women.

In general, Cook said he wants to add to the legacy previous EPD police chiefs have left behind.

“This is a great police department,” Cook said. “I wouldn’t have left Evanston, went somewhere else, and came back if I didn’t have confidence in these police officers.”