Men’s Tennis: Ready to put its first three matches behind it, Northwestern gears up for Alabama and Auburn 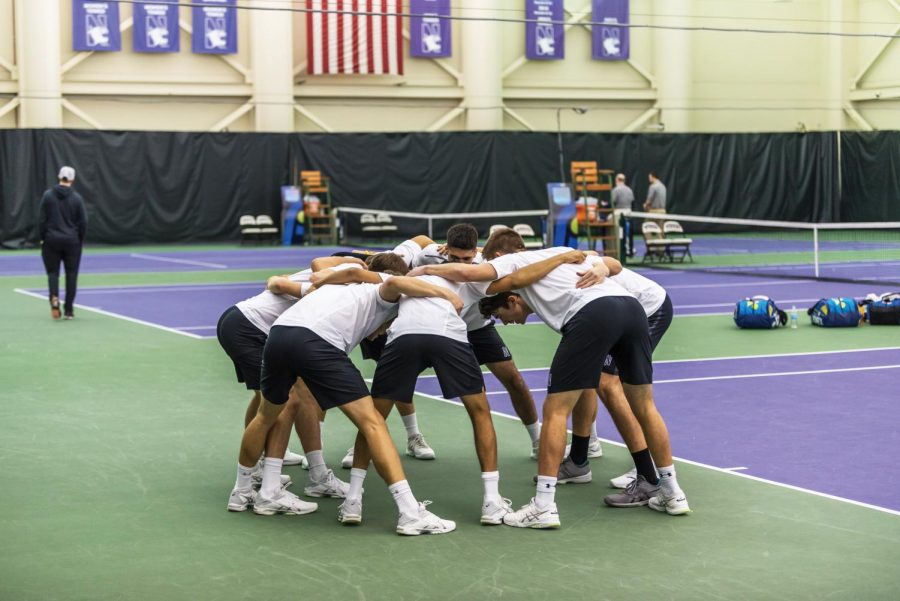 Northwestern’s team huddles on the court. The Wildcats hope to earn their first win of the season this weekend.

With two chances in Alabama this weekend to get its first win of the season, Northwestern will either find a new sweet home or return to Evanston again without a win on the ledger.

As the schedule moves forward against two more strong opponents, the Cats’ (0-3, 0-0 Big Ten) first challenge will be defeating unbeaten Alabama (4-0). Coming off of a 20-13 campaign last season, the Crimson Tide are looking to maintain their dominance over non-conference opponents. Since the start of last year, Alabama is 22-3 in non-conference play.

Then it’ll be the Tigers (7-0), who have been even more dominant than the Crimson Tide this season, starting off with seven straight victories — all of which have been shutouts.

NU hasn’t had the same start to its season. But, in the midst of this challenging start, head coach Arvid Swan said he is pleased with the leadership the upperclassmen on the team have provided for the younger players.

“We have seniors that have been part of really great teams, so they know what it takes,” he said. “They set a great example in terms of their effort and in practice and in the conditioning sessions. It’s a good group, three very experienced guys, so I think they’re a really good help to the younger players.”

One of those younger players is sophomore Antonioni Fasano, who has had the opportunity to play doubles in all three of the Cats’ matches so far. Despite not having won the doubles point yet, Fasano said the Cats have been working in practice to try to remedy the team’s struggles.

“Doubles goes by really fast,” he said. “So it’s really important to start off with a lot of energy and try to get the momentum going on all three courts.”

In the NU’s most recent match against N.C. State, Fasano was paired with freshman Trice Pickens after playing the first two matches with senior Ben Vandixhorn. Fasano said that although he hadn’t played a match with Pickens until Sunday, they had been practicing together since the fall, including a tournament in Minnesota.

As on-court issues have compounded and the team hasn’t yet found a lineup that led to a win, Swan mentioned two seemingly obvious, important points as the blueprint for the team’s success.

“The goal is to be able to play a complete match,” he said. “It means putting together three solid doubles teams playing very competitively and all six singles spots competing at the highest level as well.”

Fasano said the team has demonstrated it’s capable of winning, citing how close the losses to Memphis and Vanderbilt were.