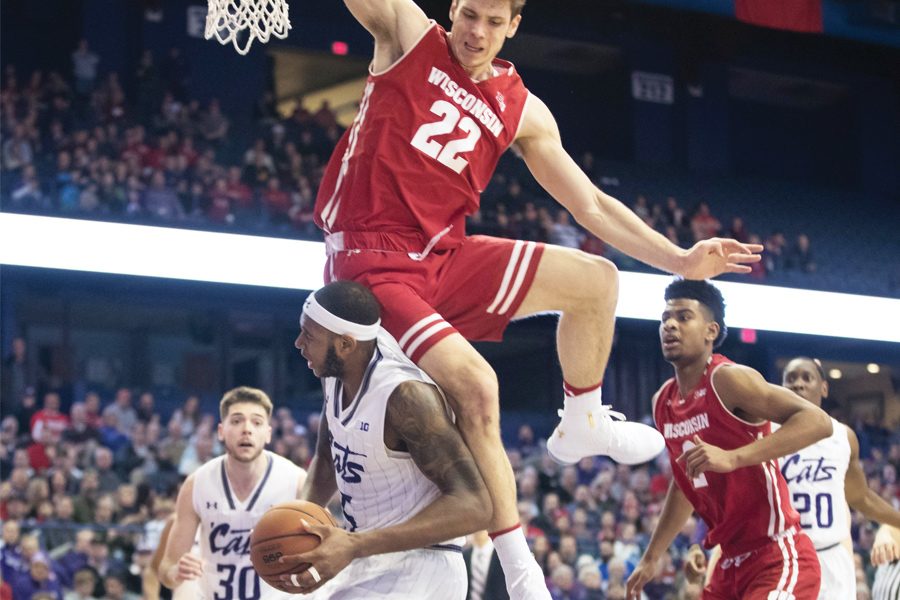 Dererk Pardon gets Ethan Happ to leap in the air. Pardon and Happ are two of the best bigs in the Big Ten.

During a battle, the front line is where most of the action takes place. For Saturday’s matinee between Wisconsin and Northwestern in Madison, Wisconsin, the painted area will be the front line.

On one side of the line will be the Badgers’ Ethan Happ. The two-time Big Ten First Team member is gliding to his third straight year on that team and also a possible second All-American selection. He is third in the conference in scoring and rebounds per game and operates as Wisconsin’s (13-6, 5-3 Big Ten) primary fulcrum on offense, sometimes bringing the ball up the court a la NBA unicorn Nikola Jokic.

On the other side for the Wildcats (12-7, 3-5) is senior center Dererk Pardon. The Ohio native, who has never made an All Big Ten team — although he was honorable mention last year — found himself outside the conference top-five in points and scoring and is not comfortable bringing up the ball.

However, there are plenty of similarities between the two standout bigs. Both are hesitant to shoot from beyond the arc, are known for their hustle and had a masterful performance in upset victories over the past seven days.

For Pardon, his 17-point performance versus Indiana on Tuesday was overshadowed by the spellbinding outburst from junior forward Aaron Falzon. But Pardon was a super-efficient 7-for-11 from the field and etched his name into NU’s record book as he reached the 1,000 point plateau.

The last time Happ suited up in the Kohl Center, he powered the Badgers to an upset of previously undefeated Michigan on Jan. 19. The 6-foot-10 forward scored 26 points — the only Wisconsin cager to reach double-digits — on 12-for-22 shooting, grabbed 10 rebounds for a double-double and dished out seven assists.

“That’s our All-American,” guard Brad Davison said after the game.

Over the last two seasons, when the two teams have gone to war, the winner of the Happ-Pardon battle leads his team to triumph. On Feb. 1 of last year, Pardon went an unblemished 8-for-8 from the field, scoring 17 points in a 60-52 win in Madison.

Three weeks later at Allstate Arena, Happ had 19 points, seven rebounds and four steals. With the Badgers up one with less than a minute to go, an entry feed to Happ was deflected by Pardon. Both players pounced on the ground to recover the ball. Happ retrieved it as Pardon fell out of bounds trying to gain possession. Wisconsin kept the ball, and seconds later forward Brevin Pritzl buried a dagger to secure a Badgers victory on the Cats’ senior night.

“Happ is an incredible player,” Collins said after the Feb. 22, 2018 game. “He had two great steals, and just his play to dive on a loose ball to give them a chance to get the last three — he’s on the floor there. You got to give him credit, just like our guys were. I thought he made a ton of hustle plays for them.”

But both players have time left in their seasons to continue to add to their legacies as two of the best bigs in their school’s history. Happ recently passed former teammate Nigel Hayes for third all-time in point scored in school history and just scored his 1,900th career point.

As for Pardon, his legacy will forever be linked to “The Shot” against Michigan two annums ago. But after reaching 1,000 career points just a few days ago, there is still room for him to refine his legacy.