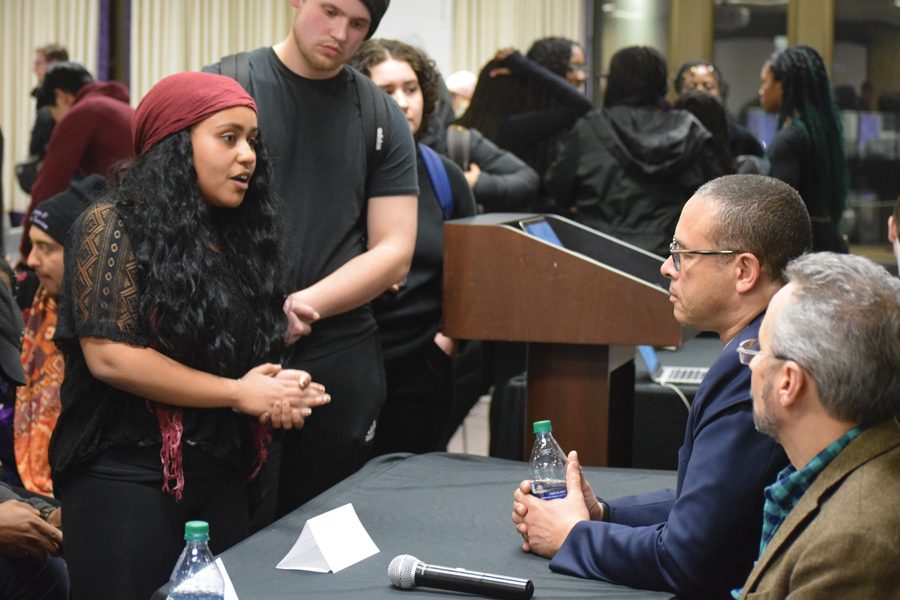 Provost Jonathan Holloway speaks at a Q&A session with students. He said one of his roles as provost is to protect the academic reputation of the University.

Provost Jonathan Holloway said removing Satoshi Kanazawa from campus would only make matters worse when students confronted him during a Wednesday Q&A event.

About 30 students, clad in black, walked into Associated Student Government Senate to express their frustration with the University’s reluctance to ban Kanazawa from campus. About 200 students were present at the event. Both Holloway and psychology department chair Prof. Richard Zinbarg denounced the researcher’s ideas, yet Holloway said dismissing him would only make the University environment more toxic.

“I worry about one martyring him and giving him even more attention than what he’s already been getting in this process,” Holloway said. “And that would be a tragedy.”

After news broke in November that Kanazawa was a visiting researcher on campus, students criticized his work as racist and sexist. Although over 5,000 students signed a petition asking for his removal, Holloway sent out an email in December that Kanazawa would complete his year-long scholarly visit –– a move he justified as upholding intellectual freedom.

Protecting the academic reputation of the University is one of his responsibilities as provost, he argued. If the University were to force a researcher out, he added, it would be “catching heat” from academia for not supporting scholars.

Yet McCormick first-year Junior Ndayikengurukiye said that he felt NU is simply overestimating the people who would cause an uproar against the removal of Kanazawa. Though both faculty and students are denouncing his research as “blatantly racist and sexist,” the University is more afraid of being attacked by a few criticizers, he said.

McCormick first-year Yemi Kelani added that NU shouldn’t have to choose between academic freedom and providing a safe and inclusive environment for students.

“We shouldn’t be weighing one ideal over the other, but he just kind of seemed like he was going to protect (academic freedom) rather than consider the fact that Northwestern has multiple values and multiple ideals and he needs to protect all of them,” Kelani said.

Both Holloway and Zinbarg acknowledged that a weak vetting process for choosing visiting researchers led to Kanazawa’s presence on campus. As a response, Zinbarg said the psychology department has revamped its process for nominating visiting scholars. Those who are nominated will go to a committee, and the entire faculty will vote on the scholar, he said.

Holloway also said the University will hold a major symposium on the intersection of race and genetics. This will be an opportunity for academics to respond to Kanazawa’s research by presenting more counter-ideas, he said.

Yet for some students, Holloway’s responses were not enough to justify Kanazawa’s presence on campus. Communication first-year Eden Strong said she was disappointed Holloway was acting “more like a politician than an educator” by trying to stay neutral at the expense of students’ wellbeing.

“When people are put in charge –– those who just spew negative views –– it emboldens those who agree with them,” she said.