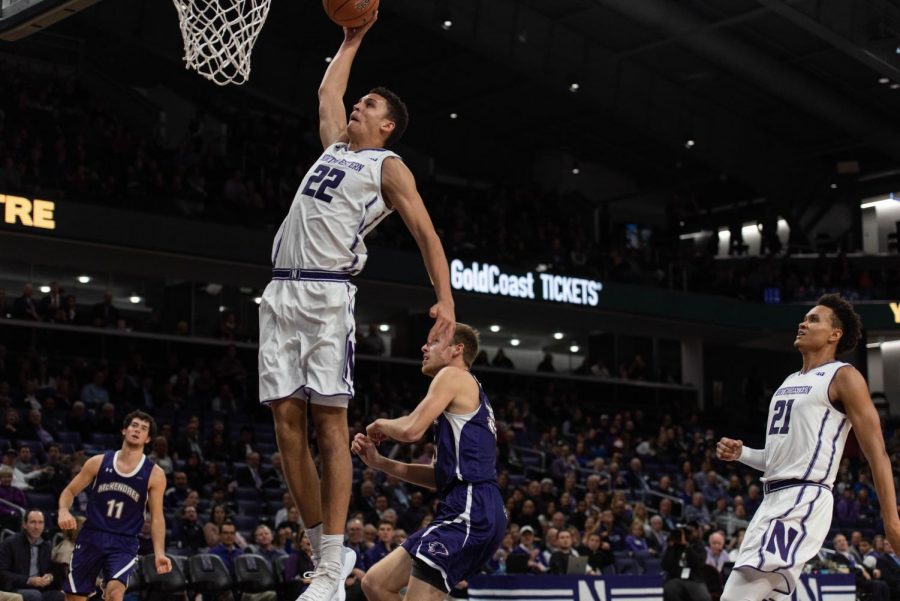 Pete Nance elevates above the rim. The freshman forward is out indefinitely.

Before Tuesday’s game against Indiana, Northwestern announced the freshman forward Pete Nance is out indefinitely with an illness.

Nance was not on the bench for the contest, which the Wildcats won 73-66.

“It’s okay long term but he’s going to be out a little bit,” coach Chris Collins said after the game. “We just got to get him healthy and get him back when he was ready to go.”

The 6-foot-10 freshman is the latest NU cager to miss an extended amount of time due to injury or illness. Senior Jordan Ash has not played since the middle of December and did not dress for the game against the Hoosiers. Junior forward Aaron Falzon and junior guard Tino Malnati both missed the first two months of the season. Junior forward Charlie Hall has not dressed for a game this season.

Nance played in the first 18 games of the season and averaged 12.6 minutes a game while scoring 3.4 points and pulling down 1.6 rebounds per contest. More than half of the Ohio native’s shots have come from beyond the arc, despite the fact he is shooting 28 percent from three-point land. Like fellow freshman Miller Kopp and Ryan Greer, Nance has struggled to earn a larger role in Collins’ rotation.

Without Nance, Falzon slid into the reserve forward role off the bench and was a spark plug for Cats. Playing extended minutes for the first time since returning from his injury, the junior scored a career-high 21 points on 6-for-7 shooting.