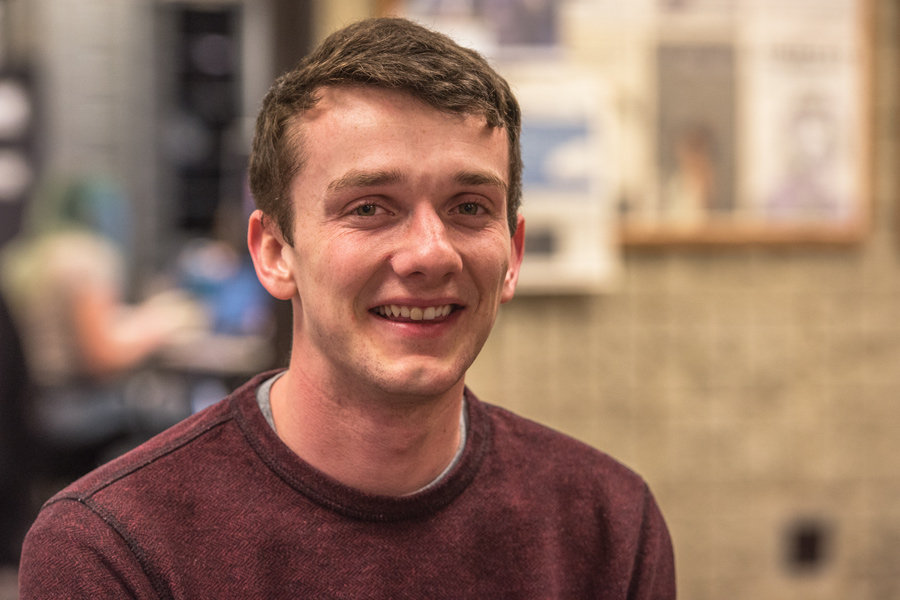 Weinberg senior Broderick Topil. Topil is a student ambassador at ULA, where he focuses on issues of LGBTQ identity abroad.

LGBTQ students face unique impediments when studying abroad. How does Northwestern support them?

It was the fall of 2016, and Broderick Topil — then a sophomore — had a monumental choice to make.

He had found himself in the rural and religious heartland of the Dominican Republic, where he was doing community work for a local nongovernmental organization. The internship, organized through Northwestern’s Global Engagement Studies Institute, marked his first experience studying abroad.

Topil knew his options were limited. But that didn’t make things any easier. He could either come out — risking his personal safety or even his job in the name of selfhood — or, he could put his true identity on a temporary hold, foregoing the ability to be himself but retaining security in the process.

He chose the latter.

Topil said the areas he was working in were conservative. Being open about his sexuality could have spelled real danger. So he did what he had to do.

“I never felt at ease there at all,” he said.

This is the balancing act that many LGBTQ students at Northwestern have to master when they decide to study abroad — especially in places where political climates are unfavorable to queer people.

The Office of Undergraduate Learning Abroad doesn’t collect data on the number of LGBTQ students who decide to take their studies beyond country lines, said Francesca Miroballi, an assistant director at ULA who focuses on advising and diversity. But NU students and representatives echo the unique challenges and considerations LGBTQ students are forced to undertake when they choose to pursue a global education.

“It’s really a tough thing,” said Topil, now a Weinberg senior and student ambassador for ULA. “There’s only so much the ULA can do when students decide to go to countries that aren’t very favorable to the LGBTQ community.”

Miroballi said ULA is committed to advancing objectives of diversity and inclusion in international education. She said the office’s primary goal is to ensure student safety, and to that end, ULA offers resources for LGBTQ students at three major programmatic stages: the prospective phase, when students decide whether or not to study abroad in a particular country; the outbound phase, when students prepare to leave for their academic program; and the on-site phase, when students directly participate in the abroad experience.

Gearing up for study abroad

When LGBTQ students begin planning for study abroad, their first task is to figure out where they want to study. Northwestern offers 150 different study abroad programs in about 50 different countries, roughly 100 of which are organized by affiliate partners of the University.

But for LGBTQ students, choosing a country is often more complicated than just seeing which programs align with their academic track: In over 70 countries, homosexual activity between consenting adults is illegal, so there are very real legal and safety concerns involved with the selection process.

Miroballi said this is an area where ULA offers support by providing online resources.

ULA’s “LGBTQIA Abroad” page — which links to on-campus resources such as the Gender and Sexuality Resource Center, Rainbow Alliance and Northwestern Greek Allies — provides students with tips for researching the legal, cultural and social environments that surround gay rights in different countries. The goal is to help students find areas in which they’d feel safe studying.

“On (the ULA) website, students are also allowed to identify as LGBTQ if they feel comfortable, so that serves as one way queer students can seek each other out,” said Joel Alvarez-Rinconeno, a Weinberg third-year and ULA student ambassador. “This helps students find people to talk to who understand their experiences.”

Miroballi said students are also encouraged to come in for personal appointments to talk with advisors about LGBTQ identity abroad and receive more tailored resources.

Students can access “country climate notes” in advising meetings, which include information about countries’ religious, LGBTQ and gender representation and historical context for those issues. Miroballi said the notes are meant to help queer students decide whether certain programs are ideal for them and to help guide how they choose to handle their sexuality while abroad.

“ULA is doing a really good job of making sure to talk about any concerns you might have, and making sure that you really understand the political climate you’re going into,” Topil said.

Once students have finished researching their host countries, connecting with Northwestern campus groups and finalizing travel plans, they move into the pre-departure support phase. This is when students receive more program logistics related to gender and sexuality norms.

Miroballi said ULA also helps identify external communities of support for LGBTQ students, both on a country and city level. This information is usually conveyed through program handbooks or revealed in advising appointments — but once students are on the ground, it falls to them to get connected with support groups and immerse themselves in safe spaces.

And even though students always have the option of reaching out to the ULA for support throughout their study abroad process, for some, that isn’t enough.

“There needs to be a more constant connection between (LGBTQ) students and ULA advisors or even (Counseling and Psychological Services),” Topil said. “At the beginning of the program, you might just be handed a book or some program packet — but that doesn’t really do too much if you’re not getting that constant support while you’re in-country.”

When students arrive in their host countries, ULA helps them connect with English-speaking therapists and doctors through NU’s GeoBlue health insurance package. It also encourages students to confide in program directors, who are trained to support students who have experienced any kind of marginalization in their daily life.

Still, it’s unclear how many of these resources are geared specifically to support LGBTQ students.

Alvarez-Rinconeno said he appreciated the office’s promotion of therapy options abroad. When he studied in Spain, he was able to plan for access to a counselor before he departed, which he said eased his transition. But those options may not exist for students in every destination.

“Therapy and other medical resources can be limited to countries that already have favorable opinions toward LGBTQ people,” Topil said. “Had I needed those resources in the Dominican (Republic), I don’t think they would have been available to me just because of the political climate there. There’s a slight disconnect between what the ULA perceives is like providing these resources and what it actually means to be supportive.”

While ULA strives to make study abroad accessible and safe for everyone, some Northwestern students say there’s a fundamental gap between ULA’s goals and what actually happens on the ground. For LGBTQ students, that discrepancy can have a huge influence on the quality of their global experience.

For this reason, Miroballi said ULA has been working with CAPS and other campus affinity groups to shape its study abroad programs.

Alvarez-Rinconeno said ULA could benefit from a more concrete structure to measure and track how LGBTQ students fare abroad. Without a regular evaluation, he said, it’s hard for ULA to craft effective policies and provide necessary resources for queer students abroad.

Still, Topil emphasized the importance of travel abroad for LGBTQ students, encouraging them to seek out the resources that do exist.

“I never want an LGBTQ-identifying person to feel like they can’t study abroad somewhere,” Topil said. “There’s so much of the world to see.”