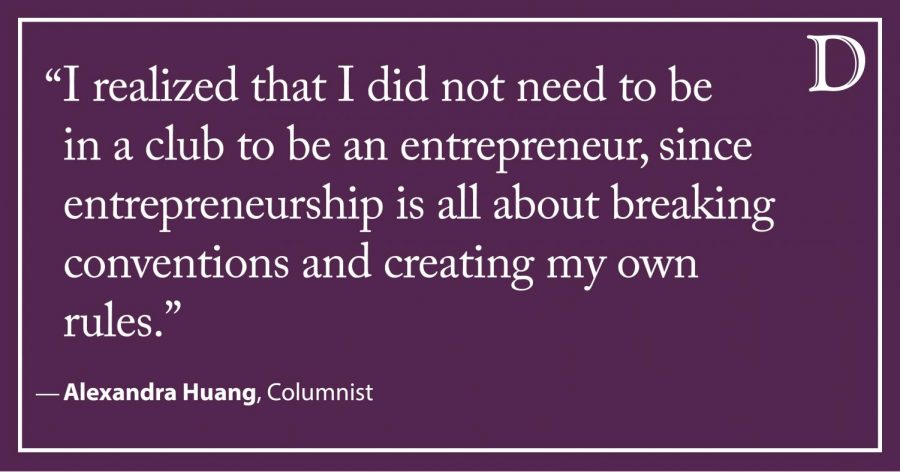 There is a culture of joining competitive extracurricular clubs at elite colleges throughout the United States. Business clubs are particularly popular at Northwestern because many students are interested in the lucrative industries of finance and consulting. Interviews for business fraternities and large business clubs last for several rounds and can sometimes create a culture of stress among students. As freshmen, many of us feel the need to join a competitive club of some sort to prove ourselves, ticking another checkbox on the way to college success.

A glossy stamp of prestige sure has its appeal, but do we actually care about the clubs we are in and the missions they are spreading? Are we in clubs because we genuinely care or simply because we are chasing after the prestige that comes along with being in a competitive organization?

At the start of last quarter, I eagerly applied for two entrepreneurial clubs, TAMID and ISBE Arch. TAMID brands itself around working with Israeli startups, and ISBE Arch is a club where students team up and work on their own start-up ideas. I imagined myself as a student entrepreneur, working alongside other students who are passionate about solving campus problems — from the inconvenience of walking from 560 Lincoln to Target just to buy a tube of toothpaste to not having healthy yet delicious dining options on the weekends. I imagined college entrepreneurship to be what I saw in shows and on books: solving real problems for real clients with real demands.

Both TAMID and ISBE were highly competitive, but I was lucky enough to get into both. Unfortunately, the entrepreneurship clubs I applied for were slightly different from what I had imagined in my head. After being told that I was carefully chosen from a pool of freshman applicants to be in the club, I was disappointed. Projects felt simulated and less catered to real client needs, and meetings involved building company portfolios and doing stock pitches rather than the hands on challenges of problem-solving that I was expecting.

I had attended both of their meetings for two weeks in a row, but as I walked back to my dorm on those dark Evanston nights, I didn’t feel satisfied. I pulled back memories from high school, where planning and leading my club meetings filled me with real joy and excitement, where I felt like my work had a real, tangible impact. I just didn’t get that feeling of satisfaction from either of these clubs.

I started to question myself: “Are you really getting what you want in these clubs? Is this the entrepreneurship that you had imagined to yourself?” Reluctantly, I conceded: No. This is not what I am looking for.

I hate to admit it, but I had continued to stay in those clubs because I thought it was a pity to quit a club that so many people wanted to get into. But just because something is competitive does not mean I should remain in it. Competition is attractive, but glitter is not gold. If something is not for me, then I shouldn’t let its prestige affect my own judgment.

While I am no longer in either of those clubs, I am now working on my own entrepreneurial pursuit. I realized that I did not need to be in a club to be an entrepreneur, since entrepreneurship is all about breaking conventions and creating my own rules. Through running a personal column where I interview people with their unique career pursuits, I get to talk to many different people — from the founder of the Happiness Planner to a well-renowned Forbes columnist. I am lucky to constantly witness genuine and passionate entrepreneurship in action, and seeing it further taught me that I can achieve my own version of entrepreneurship even without being in any of the competitive clubs.

I now know that competition is no guarantee of excellence. Only I can decide what is meaningful for me and what isn’t.

Yujia Huang is a Weinberg junior. She can be contacted at [email protected] If you would like to respond publicly to this column, send a Letter to the Editor to [email protected] The views expressed in this piece do not necessarily reflect the views of all staff members of The Daily Northwestern.