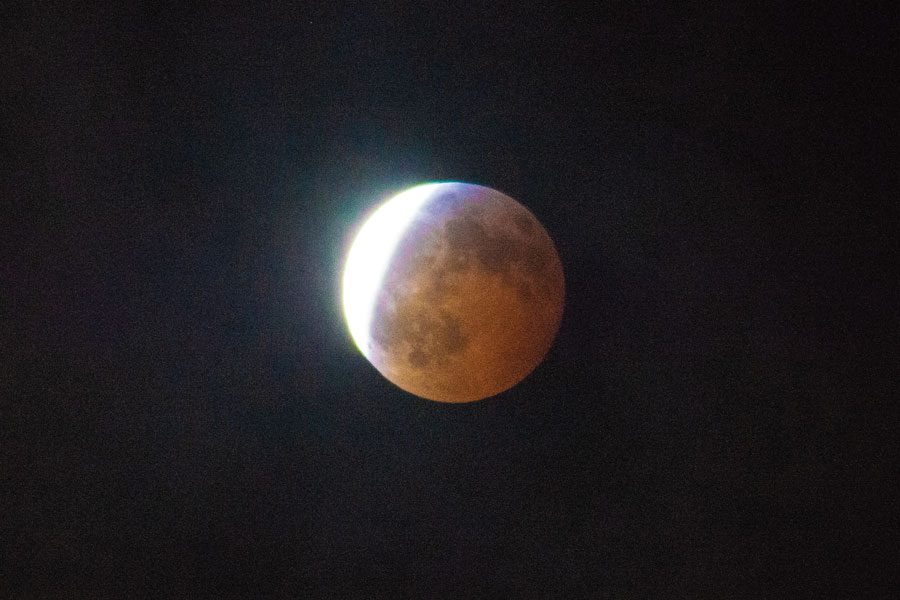 A view of the moon near the end of the lunar eclipse. Attendees of the watch party at the Dearborn Observatory were unable to view the eclipse through the telescope because the dome froze from the weekend’s heavy snow

As the moon, Earth and sun lined up for a total lunar eclipse Sunday night, skygazers from Northwestern and nearby neighborhoods crowded Dearborn Observatory despite the cold winter temperatures.

The lunar eclipse viewing party, held by Northwestern’s Center for Interdisciplinary Exploration and Research in Astrophysics, welcomed about 150 community members to enjoy the “Super Blood Wolf Moon.” NU student astronomers volunteered at the observatory to explain the formation of a lunar eclipse. The complimentary hot chocolate ran out in about half an hour.

A total lunar eclipse occurs when the Earth moves between the sun and the moon, blocking most of the sun’s light from reflecting off the moon, explained Weinberg junior Josh Pritz, a volunteer at the viewing party. Pritz added that the moon that night also appeared to be larger than usual, as its orbit had brought it closer to Earth.

Physics and Astronomy Prof. Michael Smutko, the operator of Dearborn Observatory, said the moon turned red as lights of other colors were filtered out by the Earth’s atmosphere.

However, heavy snow from the last few days froze the telescope dome, preventing the slot in the roof from rotating during the observation. Visitors didn’t have a view of the moon through the telescope until 11:30 p.m., when the moon moved to the section of the night sky where the slot was stuck. Volunteers tried to unfreeze the dome by moving the motor slightly back and forth, but they were unsuccessful.

“What a night to have the dome freeze,” said Katie Barnhart (Weinberg ‘18), a volunteer at Dearborn Observatory. “It was sunny all day today, so the sun probably melted a bunch of snow. When it froze again, the ice froze the dome.”

To help make up for the frozen dome, event organizers streamed a live broadcast of the lunar eclipse from Los Angeles and set up a portable telescope outside the observatory for people who were willing to take a peek at the lunar eclipse in the cold.

Jerri Zbiral, an Evanston-based artist, attended the eclipse viewing party with her husband. She said she came to the viewing party to celebrate the memory of watching a solar eclipse with her son and husband 20 years ago. Zbiral added that she didn’t prepare for the brutal cold and decided to stay inside and watch the livestream. She said it was still “quite phenomenal” to view the eclipse from the computer screen.

“Imagine how people would imagine and interpret the spectacle hundreds of years ago,” Zbiral said. “So many folktales are created from this striking phenomenon.”

Though they weren’t able to view it firsthand, visitors also gathered in a classroom on the first floor to learn more about the eclipse. During his speech, McCormick senior Saif Bhatti sketched a diagram of the lunar eclipse on the blackboard and explained the origin of the title “Super Blood Wolf Moon.”

Bhatti said he didn’t feel like he missed too much because of the frozen dome, because he’s already been able to witness astronomical phenomena at Dearborn Observatory before. Despite the unsuccessful operation of the telescope, he said he was still happy to attend and learn about other aspects of the moon.

“It is wild to think that the view you have now is the same view people had thousands of years ago,” Bhatti said. “It makes you tingle and hits you somewhere that is innately human.”

Related stories:
– Northwestern astrophysicist may have captured birth of black hole
– The Weekly podcast: Out of this world