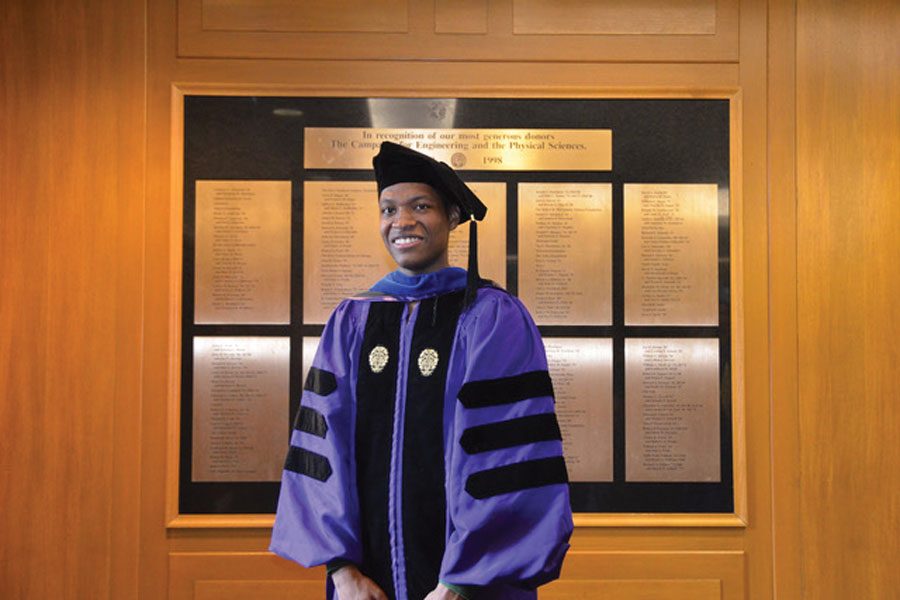 Former Northwestern graduate student Lawrence Crosby settled a lawsuit this month with Evanston two years after the release of a video that shows his violent arrest by Evanston Police Department officers.

Crosby, who earned his PhD from McCormick last June, was arrested on Oct. 10, 2015, after someone mistook him for stealing a car that he owned. EPD charged him with disobedience to police. Following the dismissal of his charges at trial, Crosby filed a lawsuit against the city and the four officers who stopped him, which was settled this month for $1.25 million.

At a Sunday press conference, Crosby said he wants to spark a conversation about bias.

“I want to take my experience and use it as an example for change — change that leads to a society where what happened to me is less likely to happen again to anyone,” he said. “I have just completed a three-year journey to clear my name. But my journey is not finished. Today I am starting on the next leg of that journey.”

EPD released the video of the arrest in 2017, compiling footage from Crosby’s personal dashboard camera, police dashboard cameras, audio recordings of the 911 call that prompted the arrest and conversations between police officers. The video has since been taken down from the city’s YouTube channel.

On the night of the arrest, a woman called 911 to report a man was breaking into a car. That man turned out to be Crosby, who is black, and the car was his own. When he heard the woman honk her car horn at him repeatedly, he got into his car and drove away. She followed him in her own car and informed police of where he was driving.

When they arrived, police pulled Crosby over. Crosby exited his car unprompted, with his hands in the air and a cellphone in his hand. Police ordered Crosby to get on the ground, but he refused and was eventually forced down to the ground by the officers. Officers then struck Crosby in the knees and upper thighs. Crosby was eventually handcuffed and arrested.

Police officers could be heard in the video discussing the arrest with one another. One officer said he told Crosby: “I didn’t shoot you … you should feel lucky for that.”

Crosby was arrested and charged with disobedience of police. The charges were later dismissed in court.

Crosby said on Sunday that it is difficult for him to watch videos of his arrest, saying the “experience was quite scarring.” He added that since the arrest, he has struggled with nightmares, PTSD and a fear of police. It also took him more time to complete his doctorate than originally planned, he said.

“It is not easy for me to go back to that situation,” Crosby said on Sunday. “I don’t know if I’m ever going to get over that in my lifetime.”

Following the release of the video, news outlets across the country began covering Crosby’s arrest, and Touhy estimates that about 20 million search engine results appear when you search his name.

“Unfortunately, Lawrence has a digital scarlet letter that will never go away,” Touhy said.

Touhy said many articles and posts depict Crosby as having committed a criminal act. Two expert witnesses were brought forward during the proceedings who estimated the cost of restoring his online reputation at at least $1 million, he said. The settlement accounted for these costs, and Touhy said he believes Crosby’s case is one of the first in Illinois to consider online reputation as part of the damages.

In an emailed statement, city manager Wally Bobkiewicz said “the settlement is a compromise of disputed claims and the parties have not admitted any liability or the validity of any defense in the litigation.”

The settlement has to be approved by council members in open session, and is scheduled to be considered at the Jan. 28 City Council meeting.