Wrestling: Northwestern looks to improve on 2-5 start with matches against Wisconsin, Minnesota 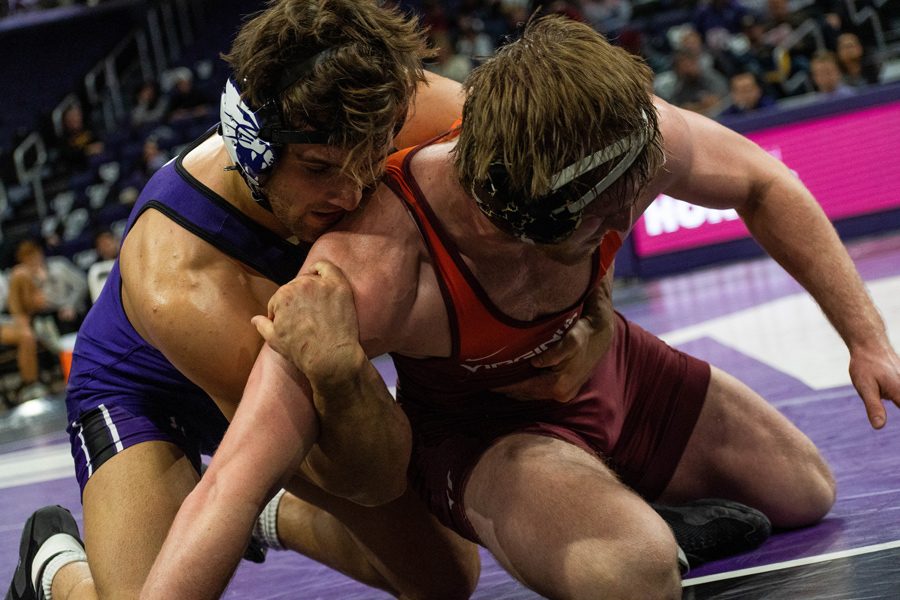 Johnny Sebastian spars with an opponent. The senior said he hopes Northwestern rebounds in the Big Ten this weekend.

It’s been an uncharacteristically rough start to the season for Northwestern (2-5, 0-2 Big Ten), which has dropped three of its last four duals, including a blowout at the hands of No. 1 Penn State. In 2016-2017, the team started 4-1, and last year’s iteration didn’t lose a dual until its seventh of the season against Illinois.

The team fell 33-8 last weekend against the Nittany Lions (6-0, 2-0), but coach Matt Storniolo said the loss wasn’t for lack of effort. The team just didn’t have its offensive juices flowing.

“I think we fought pretty hard from top to bottom,” Storniolo said. “I’d like to see us be a little bit more offensive and give ourselves more opportunities to score. But I don’t think that the team’s score was reflective of how hard we competed.”

To rectify the team’s offensive struggles, the coaches spent a bulk of the week going over how to be more aggressive, highlighting ways to close the gap and attack quicker. The Cats have also gone over technique, learning how to react to specific situations that have led to wrestlers losing matches over the course of the season.

Storniolo said the team needs to do adopt a more attacking mentality on the mat, something he said was echoed by sophomore Sebastian Rivera.

Rivera is the nation’s top-ranked 125-pound wrestler and a former Big Ten Wrestler of the Week. He was one of just two Cats who picked up any points against Penn State last week, in his case a technical fall in the dual’s opening minutes.

Rivera said NU needs to be more fearless and not get lost in its opponents’ stats or storylines.

Senior Johnny Sebastian was defeated 10-4 by Penn State’s Mark Hall last week. He said with two Big Ten duals in the offing, the team can’t get bogged down by last week’s disappointing result.

At the time of the match, NU’s eight points were the most allowed by Penn State this season, a statistic Sebastian said few people on the team know or even care about.

“I’m sure a lot of us don’t even realize that that was the case, points wise,” Sebastian said. “Every week, especially in the Big Ten, you gotta stay positive throughout the whole process otherwise you’re gonna get lost.”