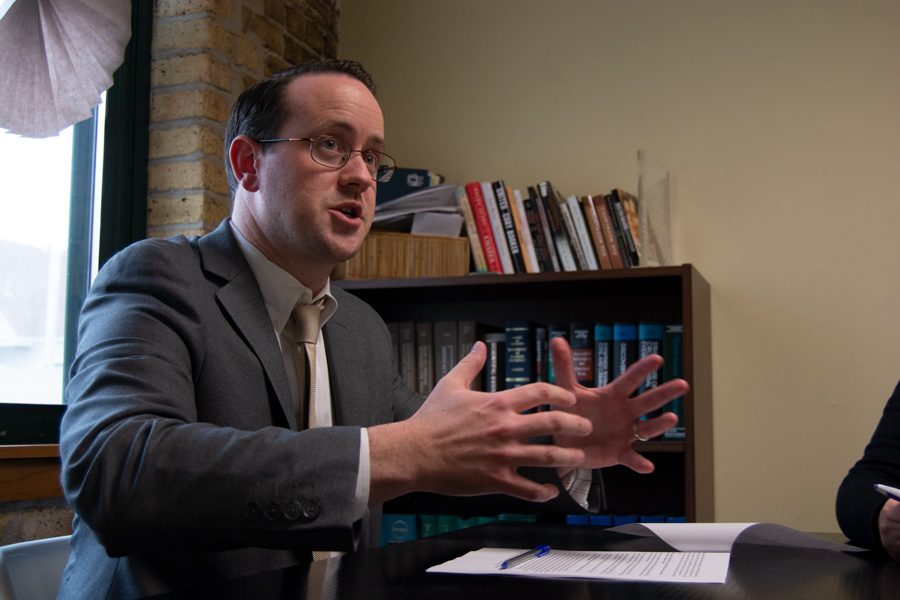 Patrick Keenan-Devlin speaks at a meeting. Keenan-Devlin serves as the executive director of the Moran Center for Youth Advocacy, providing legal and emotional services to at-risk youth.

Patrick Keenan-Devlin believes Evanston is a community of “haves and have nots,” with few people in the middle. Although lots of financial and nonprofit resources exist in the community, he said the city still faces problems, such as inequity, poverty and the effects these factors can have in destabilizing families.

The Moran Center for Youth Advocacy, where Keenan-Devlin is the executive director, strives to “humanize the human” by getting to know the personal challenges at-risk youth face in Evanston. The center provides free legal services for youth in the criminal justice system and schools, focusing on restorative justice programs and other support systems.

The center attempts to keep Evanston youth out of jail and prison, but is also equipped with resources to connect them back to their community.

Keenan-Devlin said the “horrifying” national statistics showing the disproportionately negative impact of the criminal justice system on black people exist in Evanston too.

“It’s true on every level, from Evanston to across the country,” Keenan-Devlin said. “The racism that is embedded in our criminal justice system is embedded here too. The system is broken and it’s readily apparent anytime you walk into a courtroom.”

Because of the systemic problems in Evanston, the center’s work in youth advocacy is especially important, said Pamela Cytrynbaum, the restorative justice coordinator at the center. Echoing Keenan-Devlin, Cytrynbaum said these systematic problems create “two Evanstons.”

“We have achievement gaps,” Cytrynbaum said. “We have gaps in class, we have real segregation and we have a lot of opportunity hoarding where folks who have a lot keep getting a lot more and folks who don’t don’t.”

In Evanston, more than 98 percent of non-Hispanic whites in 2017 had a high school degree, according to the American Community Survey. That number was 85.7 percent for blacks and 71.9 percent for Hispanics and Latinos.

Cytrynbaum said Evanston residents must reconcile “the mighty liberal majesty of our big lefty hearts” with the fact that inequity runs deep within the city. She said there are people across the city struggling with homelessness and food insecurity that often get overlooked.

The center has expanded over the years and made choices to fit the needs of clients in holistic ways, said Andrew Sowle, a legal fellow at the center.

“It started with criminal defense … (but) over the years, attorneys saw the children who we’re helping in the courtroom have a lot of needs that weren’t being met in school,” Sowle said.

As the program evolved, new projects began addressing family issues that might prevent students from succeeding in school, Sowle said. The center has focused on providing resources, visibility and recognition of students’ circumstances rather than just punishment for their actions, he said.

In order to address these circumstances, the center focuses on restorative justice, an alternative approach to discipline popular in schools across the country that attempts to take a student out of the criminal justice system and help him make amends through other means. In using a restorative justice approach, Cytrynbaum said the center aims to understand the full context of someone’s actions.

For example, when she sees someone smoking marijuana, even though the law says it is illegal in many cases, Cytrynbaum asks the deeper question — why? When the center actually gets to know their situation, she said one can come to understand the root cause of the behavior.

“When you actually talk to the kid and the family, the kid has massive, undiagnosed anxiety and some mental (illnesses),” Cytrynbaum said. “He’s sitting alone smoking pot because he’s trying to settle himself because he feels he’s going crazy. He’s doing it in his neighbor’s car because his family’s about to get evicted and he’s terrified. That’s a whole different case. The law can’t look at that. The law doesn’t care what’s going on.”

Cytrynbaum said the center has kept thousands of students in school and out of jail through a wide range of services. Moran is leading the charge to changing the structure of the system.

“Young folks so want to make it work,” Cytrynbaum said. “You just have to have a conversation with them to understand that. There’s so much optimism and so much good despite tremendous trauma. The resilience of young people is breathtaking to me. And that’s what we focus on.”