Northwestern astrophysicist may have captured birth of black hole 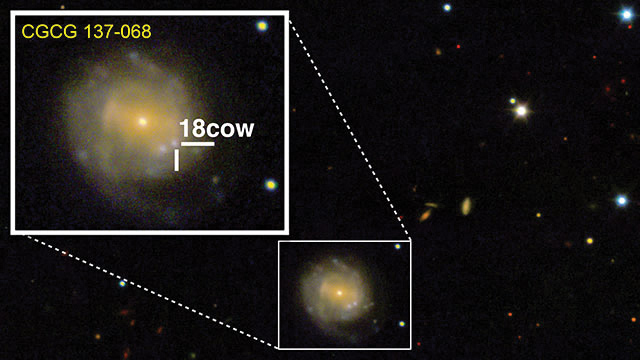 The anomaly, nicknamed “The Cow.” This is the first time the birth of a black hole may have been captured.

An international team of researchers led by physics Prof. Raffaella Margutti may have captured the creation of a black hole this summer, according to a University news release.

The team’s telescopes found AT2018cow — a bright anomaly nicknamed “The Cow” — 200 million light years away. The researchers analyzed several imaging sources before realizing they may have seen the exact moment a star collapsed to form “a compact object, such as a black hole or neutron star.”

“Two hundred million light years is close for us, by the way,” Margutti said in the release, adding that The Cow is the closest object of its kind she and her team have ever found.

Astronomers initially thought The Cow was a supernova. They later noted, however, that it was at least 10 times brighter than a typical supernova, and appeared and disappeared much faster than other star explosions.

“We knew right away that this source went from inactive to peak luminosity within just a few days,” Margutti said in the release. “That was enough to get everybody excited because it was so unusual and, by astronomical standards, it was very close by.”

To classify The Cow, Margutti and her team examined its chemical composition and viewed it with X-rays, hard X-rays, radio waves and gamma rays. This enabled them to continue studying it after its initial brightness faded, according to the release.

“We know from theory that black holes and neutron stars form when a star dies, but we’ve never seen them right after they are born,” Margutti said in the release. “Never.”

The phenomenon, the release said, will help astronomers better understand the physics at play during the creation of a black hole or neutron star.

Margutti presented her findings at the 233rd meeting of the American Astronomical Society in Seattle on Jan 10. The research will later be published in the Astrophysical Journal.